How Comcast/NBCU Is Connecting With Startups

Cable is a mature industry, but that doesn't mean it's not interested in learning about and cultivating new ideas and engaging with some of the startups that are trying to turn their dreams into a profitable realities.

Comcast Corp. (Nasdaq: CMCSA, CMCSK) and NBCUniversal LLC , companies that span broadband infrastructure, video and media, have been trying to plug into the vibrant startup world with an accelerator program that recently opened up applications (with a deadline of April 7) for a second class/cohort that will get underway in mid-July. (See Comcast/NBCU Readies Second Startup Accelerator Class.)

Comcast NBCU's Lift Labs Accelerator, developed in partnership with Techstars, will select as many as 12 startups to participate in a 13-week program at the recently opened Comcast Technology Center in Philadelphia. Some areas of particular interest for this year's class include AI and machine learning, blockchain, voice control, virtual, augmented and mixed reality, as well as accessibility tech. (See Slideshow: The New Comcast Technology Center.) 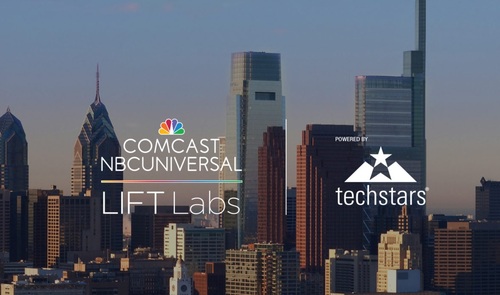 Starting with this year's class, the Lift Labs accelerator will operate from the fourth floor of the recently opened Comcast Technology Center in Philadelphia (the tallest building in the image). Image source: Comcast.

The program will culminate with a "Demo Day" in October, where the graduates will get a chance to pitch their businesses to "hundreds" of investors, mentors and business leaders. They'll also have an opportunity to forge partnerships with Comcast, NBCU or one of their subsidiaries.

Comcast has been engaged with and investing in startups for years, typically through its Comcast Ventures unit, but the idea of developing a startup accelerator program was spawned about two years ago as the company thought about different ways to engage with and help startups that were focused on areas of long-term interest to Comcast.

"We're always looking for new models of innovation," said Ebony Lee, SVP of strategic development at Comcast Cable and Techstars mentor, who has been with Comcast for more than ten years and generally been focused on forging new areas for the business, including Comcast's X1 platform.

"There's always more that we can be doing and more that we could be learning," Lee said, noting that the process of developing the Lift Labs program included meetings with more than 1,500 founders to find out what they needed most to help launch and grow their fledgling businesses.

The top-level feedback includes access to subject matter experts in specific categories, how lessons learned by larger companies such as NBCU and Comcast could apply to their situations, and how to get their stories "amplified" so a larger group of people were aware of them, Lee said.

For Lift Labs, Comcast/NBCU is working with Techstars, a company that specializes in accelerator programs conducted on its own on a global basis and through other corporate partners that have included Target, Barclays and Disney. Comcast also has a right to a small equity stake in the Techstars class.

Mentorship – not just money – matters
Comcast/NBCU and Techstars didn't detail the specific financial aspects of the Lift Labs program, but companies accepted into Techstars accelerator programs are typically offered a $100,000 convertible note, with Techstars contributing $20,000 that is used as a stipend for living expenses during the program, and, in return, receives 6% common stock from each company. Startups that join Techstars accelerators also get access to Techstar resources after the program, and access to more than $300,000 of cash-equivalent hosting, accounting and legal support and other perks that are worth more than $1 million, according to the Techstars FAQ. Techstars also cites a historical average that companies in its programs go on to raise more than $2 million of outside capital.

Outside of the base-level program with Techstars, the Lift Labs effort also provides direct mentorship and access to valuable business leads at the company.

Funding is important to any startup, but the idea with the accelerator program is to provide resources, such as mentoring, that go beyond cold hard cash. Lee said Comcast/NBCU has contributed about 50 mentors across the companies, with Techstars also contributing and recruiting mentors and former company founders who can advise startups on business models and how their products can best fit into the market.

"We have other resources that we think we can bring to bear to help startups de-risk their business and increase their chances of success," Lee said. "A large part of that is getting access to people who have expertise in certain areas."

Startups in each cohort also work together in the program and are, in many respects, kindred spirits. "You have this sort of built-in group of people that you'll continue to learn with over time," Lee said.

Though it's not guaranteed, startups that go through the program also have an opportunity to pilot their products with Comcast and/or NBCU. About 70% of last year's Lift Labs class came away with a partnership with the company.

The 2019 Lift Labs program will be run similarly to last year's and focus on areas such as immersive and interactive platforms and experiences, "digital-first" customer engagement and next-gen marketing.

"If we've done our job we've identified and attracted some really interesting startups that are working in areas of interest to our company," Lee said.

This year's program will also feature a new managing director, KJ Singh, who has run ten accelerator programs at Techstars. This year's group will operate on the fourth floor of the recently opened Comcast Technology Center in Philadelphia. "This will be our permanent home going forward," Lee said.

Last year's class was selected from hundreds of applicants.

Establishing those business connections and getting access to decision makers through the program was key, said Glenn Gutierrez, founder of Texas-based Alive5, a startup that was part of the program's inaugural graduating class in 2018.

Alive5, a company that has developed a platform that integrates chat and other digital communications with the payment/transaction process, has deals with some well-known names, including Royal Caribbean, the Baltimore Ravens, Comcast Spectacor and the New York Yankees. "It's where messaging meets payments," Gutierrez said of the company's focus.

Reflecting back on the program, he said the first two weeks of the fast-paced program was "mentor madness," with meetings spanning eight to nine hours a day. "The first two weeks set the expectations," he said, noting that he and his company were able to obtain quantifiable feedback that might take a year to get.

He said the program also enabled Alive5 to look into new products that could help it expand on its existing base and reach new verticals.

Feedback from the program has also helped some startups focus on higher-level business strategies.

Thinker-Tinker, another startup from last year's cohort, ended up restructuring its approach. The startup, which focuses on character-based, connected learning products for children, originally focused on creating products on a one-off basis, but discovered during the process of the program that there is more value and opportunity in creating a bigger platform, said Yuting Su, Thinker-Tinker's founder.

Thinker-Tinker's first product is an interactive, "smart plush" toy called the Octobo. The startup, which has a partnership with DreamWorks Animation (Comcast acquired the studio behind characters such Shrek as Kung Fu Panda in 2016), is entering production mode and expects to launch its product by this April or May.

Comcast/NBCU isn't the only cable-focused entity with a startup accelerator program. UpRamp, an initiative tied to CableLabs, also runs a program that provides selected companies with opportunities for deals and access to industry execs in exchange for a small stake, usually in the form of warrants. (See UpRamp Announces New Startup Cohort.)