BARCELONA -- MWC 2018 -- Telefónica has launched its voice-activated "cognitive" assistant Aura in the six markets of Argentina, Brazil, Chile, Germany, Spain and the UK after teaming up with tech giants including Facebook, Google and Microsoft on the new platform.

Powered by artificial intelligence, the Aura technology will be available through apps that Telefónica's customers can download onto their mobile devices.

Unlike the digital assistants from Amazon.com Inc. (Nasdaq: AMZN), Apple Inc. (Nasdaq: AAPL) and Google, however, Aura has been designed around the communications services that Telefónica provides to its customers.

"It is a new customer relationship model based on cognitive intelligence and a one-stop shop for navigating through different channels," said Jose Maria Alvarez-Pallete, Telefónica's CEO, during a press conference earlier today.

Demonstrations at today's press event showed how customers would be able to ask for details on monthly data usage or charges and receive feedback in voice and text formats.

In Spain, where Telefónica provides pay-TV services to about 3.5 million customers, the operator has gone a step further, including the Aura technology in a "Movistar+ Habla" app that allows customers to control TV and other services.

Telefónica says that Aura will learn from its interactions with individual customers and ultimately be able to provide tailored recommendations and support based on a user's preferences.

But far from presenting Aura as a response to Alexa and Cortana, Telefónica has announced partnerships with several technology giants who will integrate Aura into their own services. "We wanted to expand channels and be where customers are, and if they are in other platforms we want to be there," said Chema Alonso, Telefónica's chief data officer, the man ultimately responsible for the development of the Aura technology.

Not Your Usual Corporate Outfit 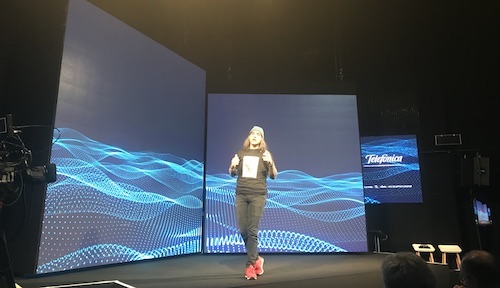 Those other platforms include Microsoft's Cortana, which is available over about 600 million devices based on the software giant's Windows 10 operating system.

That is not surprising, as Microsoft Corp. (Nasdaq: MSFT) appears to have played an important role in the development of Aura itself. During last year's press conference on the Aura initiative, Peggy Johnson, a vice president of business development for Microsoft, said that a number of recent technology breakthroughs within Microsoft had been fed into Aura.

For instance, Aura uses Microsoft's Bot Framework, which is designed to give developers tools for building and connecting intelligent bots, as well as its LUIS technology, which Microsoft calls a "machine learning-based service for building natural language understanding."

Telefónica's reliance on Microsoft could raise questions about the degree of in-house innovation that went into the Aura technology.

In Chile and Germany, meanwhile, customers will be able to access Aura through the Facebook Messenger app following a tie-up between Telefónica and the social networking giant. "From today, Chileans and Germans will be able to use Aura inside Messenger," said Javier Olivan, the vice president of growth at Facebook. "This is an exciting development on that front."

Google (Nasdaq: GOOG) has also been involved in Aura. Scott Huffman, a vice president for the search engine giant, showed reporters how customers could access Aura from within Google Assistant by typing "Let's Talk to Aura" when using the app.

In Argentina, Brazil and the UK, customers will be able to download a "global app" to make use of the Aura technology.

Whether or not Aura owes more to Microsoft than Telefónica, the Spanish operator is attaching a lot of importance to the initiative. "This is state-of-the-art technology. We have transformed into a platform company," said Alvarez-Pallete. "Telefónica has become a platform of platforms."

Besides launching Aura, Telefónica also announced an initiative called the Data Portability Cooperation in conjunction with Deutsche Telekom, KPN and Orange, aimed at allowing customers to move their personal data from one operator to another.

The move seems aimed at addressing regulatory concerns about operators' ownership of customer data and is open to other operators, said Alvarez-Pallete. "We have worked with the largest European players to share protocols to make sure data portability is a reality," said Alvarez-Pallete. "We are inviting others to join to provide more confidence and security and value to customers."