What to expect from the upcoming 3.45GHz auction for 5G

The FCC is scheduled to conduct yet another 5G spectrum auction, for around 100MHz in the 3.45GHz to 3.55GHz band, in October.

It's dubbed Auction 110, and it's scheduled to start October 5.

According to the financial analysts at New Street Research, the auction is poised to increase the total overall amount of spectrum in circulation in the US from 1023MHz to 1123MHz. 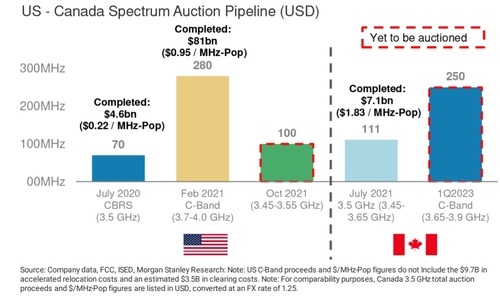 The analysts at Morgan Stanley offered a look at how the upcoming 3.45GHz-3.55GHz auction compares with recently completed spectrum auctions in the US and Canada. Click here for a larger version of this image.
(Source: Morgan Stanley)

Unfortunately, the upcoming Auction 110 for spectrum in the 3.45GHz-3.55GHz band does not have a snappy name like CBRS or C-band. Therefore, after much discussion, the Light Reading editorial team has unilaterally decided to arbitrarily apply a memorable name to this auction, in the same way we nickname our pets, acoustic guitars and useless Internet connected speakers. We plan to use this name in all our subsequent coverage of the auction, whether it sticks or not. The name we have decided to give this auction is "Andromeda." We chose this name mostly at random, and selected it only because we like the sound of it and because it was the name of a short-lived sci-fi TV show that no one watched. Nonetheless, "the Andromeda auction" is the official Light Reading name for Auction 110. Deal with it.

Anyway, the FCC just released an initial list of interested bidding entities for the auction, a development that essentially paves the way for speculation on what will happen during the Andromeda auction in October.

Most financial analysts believe AT&T will be the most aggressive bidder during the auction, partly because the company was outbid by Verizon during the C-band auction and partly because AT&T is in the midst of a shift away from content to refocus on its core telecom business.

"AT&T will be keen to get the maximum 40MHz allowable on a quasi-nationwide basis, while T-Mobile has said they will be opportunistic, although they and Verizon already have some 200MHz of midband spectrum. Dish is another wild card, although it lacks the financial resources of the larger wireless players," wrote the financial analysts at Morgan Stanley in a note to investors this week.

The Andromeda auction (for 3.45GHz-3.55GHz licenses) carries a number of caveats. Importantly, licenses in the auction will be broken up into ten unpaired 10MHz blocks (labeled A through J), and no single winner can get more than 40MHz in a particular location.

As a result, the financial analysts at New Street Research expect AT&T and T-Mobile to be the big winners. "We think that AT&T, T-Mobile and Dish each want 40MHz in the 3.45GHz auction (the limit any one company can buy), but there is only 100MHz to go around," the analysts wrote in a note to investors in July. "Based on visible resources, AT&T and T-Mobile are best positioned to end up with 40MHz each, leaving 20MHz for Dish (and other participants)."

One other caveat in the Andromeda auction: The US military has carved out dozens of Cooperative Planning Areas (CPAs) and Periodic Use Areas (PUAs) where soldiers will still be using the 3.45GHz-3.55GHz band well into the future. These areas include Camp Pendleton in California, the Joint Readiness Training Center in Louisiana, Camp Lejeune in North Carolina and White Sands Missile Range in New Mexico. Companies that win licenses in these locations will need to share them with soldiers when the Defense Department needs them. 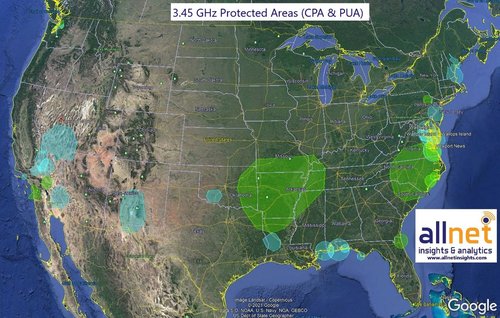 "The radius of these areas is in range of 38 to 95 km, which is significant considering that some of these radar locations are close to high population areas," noted the 5G Americas trade group in a recent publication.

How much will it raise?

Continued the Raymond James analysts: "Still, midband spectrum remains crucial in densifying 5G networks, and while we do not expect anywhere close to C-band-esque prices, this is a good opportunity for price-conscious bidders (e.g. Dish) to augment spectrum holdings."

Others agreed  but they too cautioned that an Andromeda blowout is still possible. For example, the analysts with Morgan Stanely noted that the relatively short list of registered bidders for the Andromeda auction  none of the nation's major cable companies or wireline providers are participating  coupled with the military's restrictions could cool bidding. However, they also noted the auction carries a reserve price of almost $15 billion, ensuring that it will at least surpass the CBRS auction.

"AT&T may be able to bolster their spectrum holdings at a reasonable price, although as we have seen in C-band and Canadian 3500MHz auctions, aggressive bidding wars should not be ruled out," the Morgan Stanley analysts wrote.