New figures from the financial analysts at Cowen Inc. indicate that T-Mobile is rapidly closing the perception gap with AT&T. If T-Mobile passes AT&T in the analysts' rankings, as it appears poised to do, AT&T would more firmly take its place as the nation's No. 3 mobile network operator. 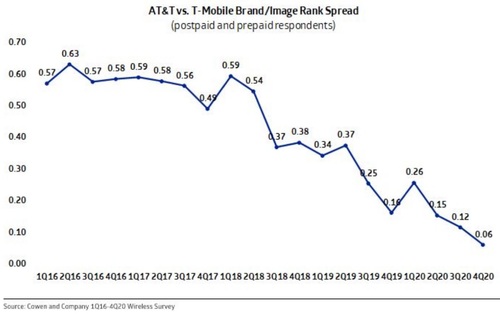 The analysts at Cowen conduct quarterly surveys of mobile customers, asking them to rank providers for "overall brand/image." Click here for a larger version of this image.
(Source: Cowen)

The Cowen analysts pointed out that the perceived difference between T-Mobile and AT&T in the fourth quarter of 2020 was at its narrowest point since they started conducting their survey. They argued the issue will be an important one to watch during 2021 because "network quality/coverage has historically been one of the main reasons for subscribers to leave their current wireless provider and likely a key driver of brand perception."

Both T-Mobile and AT&T are in the midst of updating their networks. T-Mobile, for its part, is deep into its rollout of the 2.5GHz midband spectrum it purchased from Sprint. AT&T, meantime, is putting the finishing touches on an upgrade effort that included adding FirstNet 700MHz and WCS spectrum to its network.

And both operators walked away with substantial C-band spectrum holdings in the FCC's recent auction, which they will undoubtedly put into action in the coming years.

Further, both operators are looking to grow in 2021. T-Mobile continues to lead the industry in terms of customer growth each quarter, but AT&T recently signaled its intent to sacrifice financial profits for customer growth in the coming months.

The Cowen report comes months after T-Mobile boasted that it surpassed AT&T in terms of total number of mobile phone customers.

However, it's important to note both companies still trail Verizon in terms of overall customer figures and Cowen's brand perception rankings.

Indeed, according to Brand Finance's new rankings, Verizon recently widened its lead over AT&T as the world's most valuable telecoms brand. The firm reported Verizon's brand rose 8% in its rankings to a value of $68.9 billion.