Ofcom, the UK telecom regulator, has tried to clear up the myth that 5G causes coronavirus  by, er, showing that it's not carcinogenic.

The well-intentioned effort to prove 5G is not a virus risk stumbles into a major non sequitur after several paragraphs, when Ofcom starts talking about safe radiation levels.

In so-called "ionizing" spectrum bands, radiation is a potential cancer risk. That's why hospital units that store CT scanners feature those nasty little hazard symbols that resemble either a rotating fan or a Scream mask, depending on how much you've had to drink.

For years, some people have worried that mobile networks could be similarly risky because they also use electromagnetic spectrum. While the concern is understandable, radiation is not dangerous to people unless it is ionizing. Anything below 30PHz is considered non-ionizing, and mobile technology won't even make it past the 70GHz range in future applications. It's about as far removed from the danger zone as the generals were at the Somme. 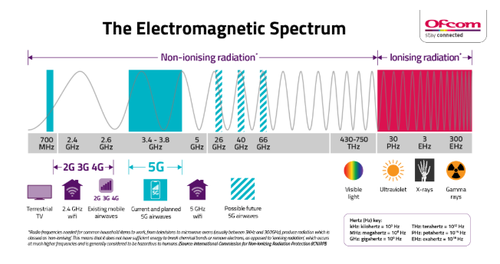 Clearing up the rumors. Click here for a larger version of this image.
(Source: Ofcom)

None of this, however, has even the slightest connection to COVID-19. That, as scientists have made clear, is a virus, a parasitic biological entity that can be transferred between flesh-and-blood hosts. It has as much to do with electromagnetic radiation as the moon does with cheese.

Ofcom might have just said that. Instead, it looks like it succumbed to pressure to reason with the 5G conspiracy theorists  and then discovered there is nothing reasonable to say.

The entire issue has become a farce. Stopping the spread of misinformation and the burning of telecom masts is obviously an industry priority. But trying to explain why 5G does not cause the coronavirus just gives the lunatics and vandals some kind of validation. It's like arguing with someone who believes in alien abduction or black magic. Would anyone bother?

Other than catching the miscreants, the only way to fight these morons is to show why telecom is so important during the pandemic, and there Ofcom has more success. If masts don't work, people can't call emergency services, it rightly points out. They can't use WhatsApp-based community networks to organize food collections for those in self-isolation.

Nick Jeffery, the CEO of Vodafone UK, also has the right approach: "It's heart-rending enough that families cannot be there at the bedside of loved ones who are critically ill. It's even more upsetting that even the small solace of a phone or video call may now be denied them because of the selfish actions of a few deluded conspiracy theorists," he wrote in a recent LinkedIn post.

Worryingly, the attacks on masts have continued, and not just in the UK. What's more, Ofcom surveys show that misleading information about 5G was seen by half of all respondents last week, up from 46% during the first week of the lockdown.

For most people, fortunately, social media posts about plague-spreading 5G equipment are as idiotic as the local weirdo gibbering about his interstellar trip to Planet Zarg. Ofcom should treat them in the same way.