Demos of futuristic 5G services have become as common a feature of the technology press conference as rancid coffee and noisy typing. Remote surgery, haptic suits, holographic calls and self-driving robots have all been trotted out by equipment makers and service providers desperate to prove 5G is more than just fast 4G.

Yet none of these services may be feasible. For all the effort that has gone into the 5G standard, and all the interest in whizzy new applications, the industry may have overlooked one glaring problem: The Internet is just not fit for purpose.

Experts are seriously worried that TCP/IP, the language that underpins the planet's most critical technology, simply will not cope with services that demand a far shorter signaling delay than is usual in today's smartphone world. Across swathes of the industry, that could rule out factory automation, self-driving cars and virtual reality. And anyone brave enough to think about remote surgery may want to reconsider. 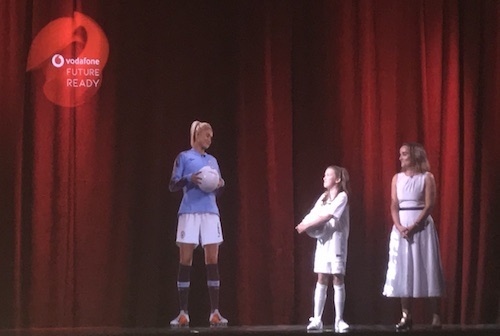 Vodafone's holographic demo was a crowd pleaser in 2018, but is the technology viable?

"I think for most of this century people have been saying IP is past its sell-by date and is not doing what we need it to do today," says John Grant of the European Telecommunications Standards Institute (ETSI). "All these extra things you want to do to make IP usable in a mobile system have involved putting extra headers on the packet, and that means you have to do more processing and send more bits over the interface."

If that sounds like a minor technical issue, it's not. A traditional IP network stores and forwards network traffic in a queueing system that looks rather like a busy motorway, says Grant. If there is too much traffic going one way at the same time, the journey takes longer. Minimizing this "latency" is relatively unimportant right now, because a delay that runs into the tens of milliseconds will not disrupt most smartphone data services. But autonomous cars and remote surgery may require latency of just one or two milliseconds.

Similar warnings have come from other parts of the industry, including China's Huawei, today the world's biggest maker of network equipment. "In the beginning, IP was designed to connect computers around the world. It was mainly intended for office networks, and was then extended to mobile Internet in order to connect all mobile phones," said Eric Xu, one of the firm's rotating CEOs, during a press conference last week. "However, for many years, IP technology has not kept up with the needs of the industrial Internet, particularly in terms of low latency and security."

Alternative medicine
But while there may be agreement on the diagnosis, the industry is torn over the remedy.

Huawei is backing a successor to IP it calls New IP. Its involvement has stoked fears that China is trying to shape the future Internet, and that what finally emerges could be subject to Chinese state control. Xu admonished such reporting by the Financial Times (subscription required) when quizzed on the topic last week. "These activities are not as complicated or politically driven as some people think, and the technical topic being researched should not be politicized."

Geopolitics is not the main concern for Grant, however. New IP, he says, actually came out of a previous ETSI initiative called NGP (Next-Generation Protocols) and is now being developed as part of the ITU's Network 2030 project. Old or new, its problem, he insists, is that it's still IP. "One of the things the operators worry about is the amount of extra information and the size of the packet headers, and New IP makes the packet headers even bigger."

The alternative is something completely different. This week, ETSI announced the formation of a new working group it calls Non-IP Networking (NIN). As the name implies, its proposal is to replace IP with a more efficient technology, one that would make the packet headers "very much smaller," according to Grant, who chairs the NIN group. "It would use rather less electricity, because there is a lot less per-packet processing," he says.

While it is early days for NIN, he already has an idea about the technologies that could support future Internet services. One option is to base them on a system called Flexilink, originally developed to support audio technologies on old-fashioned ATM networks. This would separate two critical processes  the forwarding of packets and the decision-making about traffic routing  and turn the network into something more like a railway than a motorway.

"Railway timetables plan for when the train is going to come, so that you have a train coming in this direction every hour and you make sure the ones it conflicts with don't come at the same time," says Grant.

NIN's big issue is perhaps a lack of industry support. ETSI's announcement names Vodafone as an important member of the new group, and Dell, the US computer giant, is also participating. But the big mobile network equipment makers  Ericsson, Huawei and Nokia  do not appear to be involved.

Reasonably enough, an ETSI spokesperson points out that NIN was set up in the last few weeks and is likely to attract interest and attention as awareness grows. But Grant identifies a potential hurdle for mainstream vendors invested heavily in IP technology. "What we want to do basically disrupts a lot of their business," he says. "There is a saying  disrupt your business before someone disrupts it for you  but that is not the way humans tend to work."

At the time of publication, Light Reading was awaiting comments from Ericsson and Nokia on their potential interest in either New IP or Non-IP.

It's possible that some 5G supporters think a latency-related crunch can be fixed in other ways. Network slicing, a feature supposedly baked into the mobile industry's forthcoming but COVID-19-delayed Release 16 standard, should theoretically allow traffic lanes to be reserved for some applications.

Grant is not convinced, and he says questions about the granularity of the slices have not been fully addressed. "It is not clear how it would work if you have a lot of traffic," he says.

One thing's for sure: The Internet has a problem  and with coronavirus, geopolitics and a looming recession to worry about, the eventual fix will be anything but straightforward.

Which is not to say that the better technology won the IP vs ATM wars.

If an autonomous car driving application requires 2 ms round-trip latency, then the control stations will need to be within 200 miles of every car they control.

No amount of packet optimization, resource reservation, or queueing can improve upon that.
Reply | Post Message | MESSAGES LIST | START A BOARD

dwx 4/8/2020 | 10:37:42 PM
Re: Seems silly Agreed, we have NPUs like Tomahawk 4 which can forward 25+Tbps of IP traffic with port to port forwarding times less than 1uS. This article seems like it was written at a time when most network devices were doing software forwarding 15+ years ago.

Delay is caused by congestion and distance. Distance you can't really do anything about unless you move endpoints closer to each other. Congestion is definitely an area of study worth looking at, but it's orthoganol to the header of the packet. The header is just an instruction and whether its IP, "New IP", etc. doesn't really matter as long as the hardware support is there to process and forward the packet.
Reply | Post Message | MESSAGES LIST | START A BOARD

gasman 4/8/2020 | 8:14:00 PM
Seems silly In the article you're basically trying to say that IP is the reason for not being able to achieve latency in a few ms.  This sounds like old school telco/RAN folk propaganda.  The fact of the matter is most hardware IP routers can and do forward packets in the low microseconds range (low single digits to 20 or 30 microseconds).  The problem isn't IP or IP routing.  What drives latency more than anything is distance/fiber-length/speed of light.  The other problem is with all of this industry/media hype spawned by the VC's trying to do data forwarding in software on common compute.  That drives latency through the roof because without hardware acceleration "hacks" like SmartNIC on compute, latency can be hard to keep bounded especially when doing multiple operations on a packet.  Articles like these just get people and execs wihout clue spun up on the wrong things, and most of us folks who know how to fix things things end up having to spend our cycles trying to fix misconceptions coming from the media and VC's.  It's a problem....
Reply | Post Message | MESSAGES LIST | START A BOARD

goundan1 4/8/2020 | 3:20:26 PM
Shilling for Huawei New IP can be done better LR can at least be objective on the the effort by Huawei in ITU to change the underlying paradigm to pave the road for world domination in 6G by introducing a completely new technology riding on the coattails of world body influenced by Chnia as in the case of WHO.

Chinese splitists want to push a Splinternet on the rest of the world so they can authoritatively control and profit from it exclusively.

Is Huawei advertising revenue on LR doing the talking these days?


Presentation - Network 2030 and the future of IP

brooks7 4/8/2020 | 2:25:41 PM
Re: Past "Sell-by" Date Well if we are depending upon networks for autonomous vehicles, then we should stop right now on that front.  Any network problems like a DDOS would then cause all kind of problems.  At best, we should expect to supplement and improve service with networks.  Autonomous cars must be that - autonomous.  You know standalone.

As to a deterministic packet network.  We had that.  It was called ATM and it got blown away by Ethernet/IP.  Fundamentally, there is no model today for investing in a non-Ethernet, non-IP network and the technologies to support it.  Think back 20 years and about all the communications technologies that we no longer have.  Sometimes they could even scale to match Ethernet/IP, but who wants to invest in silicon and software that have a huge probability of going nowhere.

ethertype 4/8/2020 | 1:38:03 PM
Past "Sell-by" Date Perhaps rather than IP being past its "sell-by" date, John Grant is past his. He seems to be one of those certain types of engineers who fell in love with deterministic networks decades ago and can't let go. 5G low latency requirements are just the latest excuse to flog their point of view. But IP, having successfully shrugged off all such prior attacks, seems likely to do so again.
Reply | Post Message | MESSAGES LIST | START A BOARD
EDUCATIONAL RESOURCES