How an Intel failure sparked a 5G boom for Marvell

The wave of excitement that first greeted 5G has not been matched by sales growth for most of its stakeholders. Giant equipment vendors are lucky to report a single-digit-percentage increase. Service providers usually fare even worse. Marvell Technology is a different story altogether.

The American chip designer has been on a sales tear fueled by takeover activity and growth at its main data center business. Reporting third-quarter figures this week, it recorded a 61% year-on-year increase in revenues, to more than $1.2 billion, thanks partly to this year's $1.1 billion acquisition of Innovium, another data center chips developer.

But the company's smallish carrier infrastructure unit, accounting for less than a fifth of sales, is now attracting much of the investor attention. Selling the chips that go into carrier networks, it recorded $215 million in revenues for the recent third quarter  a dramatic year-on-year improvement of 28%.

"Growth was driven by our 5G products ramping at multiple customers," said CEO Matt Murphy on a call with analysts. 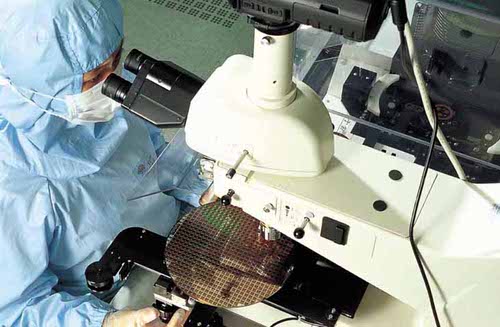 Inside a fab owned by TSMC, which makes chips for Marvell
(Source: TSMC)

The outlook is even brighter. Murphy anticipates a 30% increase in 5G sales this quarter, boosting overall growth at the carrier infrastructure unit to more than 40% year-on-year and at least 13% sequentially.

If it delivers, Marvell would be looking at carrier infrastructure sales of no less than $243 million for the final quarter.

"It's exciting to see the step-up in our 5G business, and we expect additional growth over the next several years as 5G adoption continues to grow around the globe," said Murphy.

Financial analysts are intrigued, perhaps because 5G has not brought such dramatic gains for other firms. The explanation is largely down to one big customer  Nokia  and the opportunity that arose when the Finnish equipment maker was let down by Intel, a Marvell competitor.

Intel on the outside

That story surfaced back in 2019 when it emerged that Nokia, under previous management, had picked Intel as the only silicon supplier for its forthcoming 5G basestations.

The single-vendor decision proved costly when Intel, in the words of then MKM Partners analyst Michael Genovese, failed to deliver a low-cost 10-nanometer product (referring to the size of the transistors in the chip).

Nokia's immediate response was to shift to field programmable gate arrays (FPGAs) from Xilinx, a convenient alternative to more customized silicon. But those proved expensive, hurting Nokia's competitiveness against Ericsson and Huawei, its chief rivals.

Under Tommi Uitto, now boss of Nokia's mobile business, it returned to the development of customized 5G silicon  only this time, instead of relying solely on Intel, it introduced Broadcom and Marvell as additional suppliers.

A contract with one of the world's top three vendors of 5G equipment is obviously a huge deal for Marvell. According to Murphy, Nokia is buying not only baseband and transport chips but also looking to Marvell for central processing units.

Starting in 2024, Marvell expects to "benefit from an increase in content at Nokia," says Murphy, when it will start shipping its Octeon-branded processors  based on Arm architecture and built with 5-nanometer technology  to the vendor.

The importance of Nokia to Marvell is hard to overstate. Of the world's big three equipment makers, only Ericsson and Nokia appear to shop for basestation silicon, with Huawei relying instead on HiSilicon, its in-house chips division. The drawback is that Marvell's 5G business may be heavily exposed to one major client.

Light Reading has not been able to determine if Marvell has any kind of commercial relationship with Ericsson, which is more secretive than Nokia about its suppliers and maintains an in-house chips business called Ericsson Silicon.

Still, Murphy referred to 5G "customers" on the investor call and there may be opportunities on the horizon. With open RAN, and the disaggregation of the mobile network, Marvell hopes to market the same kind of products developed for Nokia as merchant silicon. One example of what the future could hold is a partnership with Benetel, a small Irish maker of radio units.

Here, too, Marvell believes it can make inroads at the expense of Intel, which has taken an early lead in the open RAN market with its x86, general-purpose chips. Among other moves, Marvell is pitching its customized silicon as an "inline" hardware accelerator, meaning it would bypass the x86 CPU for more efficient baseband processing.

"We are not beholden to some company that starts with an I and claims to own the server market and is based in Santa Clara, and we don't need increasingly higher-priced silicon and cores because we are doing the whole thing inline," said Raj Singh, the executive vice president of Marvell's processors business group, during a conversation with Light Reading in September.

What's important is that several big operators seem to agree and have been demanding alternatives to Intel for their future open RAN networks. Among them is Scott Petty, Vodafone's chief digital officer, who told Light Reading in October that "dedicated silicon" was needed to meet performance expectations.

Any investor doubts about Marvell are likely to concern profitability. Huge expenses, including an R&D bill of $372 million, left the company with a net loss of nearly $63 million for the recent third quarter, up from $23 million a year earlier.

But worries about a $40 billion takeover of Arm by Nvidia  and what this could mean for other Arm licensees  will have faded this week. On December 2, the US Federal Trade Commission sued to block the move on competition grounds.

Marvell's share price was up more than 19% in pre-market trading on the Nasdaq today at the time of publication. At $71.03 when the market closed on December 2, it has more than trebled since February last year. If Murphy is right about 5G, there may be more gains ahead.