Höttges prepares to pull T-Mobile's strings in the US

Deutsche Telekom CEO Timotheus Höttges confirmed that he's preparing to buy a controlling stake in T-Mobile in the US. And he set an ambitious goal for the German company's US operations: "We will become No.1 in the United States," he said Friday.

Specifically, Höttges said Deutsche Telekom is in talks to buy out a portion of SoftBank's ownership in T-Mobile US in a deal that could be worth up to $20 billion, according to several reports. SoftBank owns 23% of T-Mobile via its 2012 investment into Sprint. T-Mobile closed its merger with Sprint in April.

SoftBank this week confirmed it is exploring the sale of its shares in T-Mobile as part of a wider $41 billion divestiture to counter the effects of the COVID-19 pandemic on its business, CNBC reported SoftBank could sell up to two-thirds of its stake in the US operator.

According to a Reuters report from DT's annual general meeting Friday, Höttges said Deutsche Telekom has the right of first refusal on SoftBank's sale under the companies' four-year shareholder pact.

"We assume they [DT] will buy at least 7% of the [SoftBank] shares outstanding to take their stake [in T-Mobile] above 50%, with the balance being sold to the public," wrote the Wall Street analysts at New Street Research in a recent note to investors. DT currently owns 43% of T-Mobile US.

Other analysts agreed that DT will purchase a controlling stake in T-Mobile in the US.

"In our view  this news is driven more by factors surrounding SoftBank's balance sheet than any underlying issues at T-Mobile," wrote the Wall Street analysts at Wells Fargo in a note to investors. "T-Mobile continues to be the main growth vehicle of the DT portfolio of assets."

From worst to first
What's more interesting though is Höttges' plan to overtake Verizon and AT&T in the US market. He faces a steep climb to get there, considering T-Mobile is a distant second in terms of postpaid market share. According to the Wall Street analysts at Cowen, Verizon commands 41.1% of US postpaid customers, while the combination of T-Mobile and Sprint controls 29.2%. AT&T is third, with 28%.

It's also worth noting that T-Mobile's prepaid business could soon shrink significantly if its sale of Sprint's 10 million prepaid customers to Dish Network closes July 1, as expected. T-Mobile's own "Metro by T-Mobile" prepaid business has been affected by a general slowdown in the prepaid sector.

But Wall Street analysts are generally bullish about T-Mobile's overall chances in the US market, given the massive amount of 2.5GHz midband spectrum it's putting into the 5G market.

"With the combined Sprint asset mix, we believe T-Mobile has a 1-2 year head start for 5G relative to its peers," noted the analysts at Wells Fargo.

"We see the company growing EBITDA [earnings before interest, taxes, depreciation, and amortization] at a high-single digit rate over the next five years, driven by revenue growth coupled with synergy capture. We assume fairly stable capex, such that FCF [free cash flow] grows at an average rate of 40%+ through the end of the forecast period, which dwarfs what we expect from AT&T and Verizon," added the analysts at New Street.

Indeed, T-Mobile said just this week it now expects to gain between 800,000 and 900,000 customers during its current quarter, up from the operator's previous guidance of 0 to 150,000. T-Mobile has long enjoyed a commanding position in quarterly postpaid net customer additions  an impressive performance considering that less than a decade ago T-Mobile was a distant fourth in the US market and was the last major US operator to activate a 4G network. 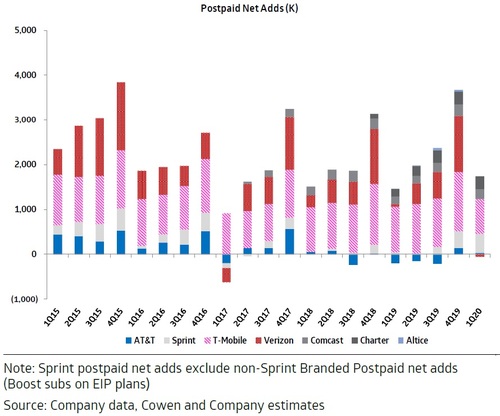 T-Mobile often leads the US industry in terms of overall quarterly customer gains. Click here for a larger version of this image.
(Source: Cowen)