Has Nokia stopped the 5G rot?

Product setbacks rarely cost so much. On October 24 last year, Nokia's market value dropped by around 6 billion ($7 billion) in a single morning after it revealed the full extent of its 5G problems.

Profitability targets were slashed, as the focus shifted from cutting expenses to fixing the mess. One of the great powers of the mobile infrastructure market had made a dreadful mistake.

The Finnish equipment, it turned out, had screwed up in its choice of 5G componentry. Rivals such as China's Huawei and Sweden's Ericsson had been opting for application-specific integrated circuits (ASICs), customized for a particular task.

Nokia had instead gone for alternatives known as field programmable gate arrays (FPGAs), that can be reconfigured after manufacture. More expensive than ASICs, these FPGAs were chewing into profit margins, making it harder for Nokia to compete.

Why they were selected in preference to ASICs is not entirely clear. One possibility is that Nokia believed FPGAs would bring a technical advantage.

Another, likelier explanation, is that they seemed a quick plug to 5G product gaps while Nokia struggled to combine Alcatel-Lucent, the equipment giant it bought in early 2016, with its existing mobile business.

Research-and-development (R&D) spending has declined since that takeover happened. 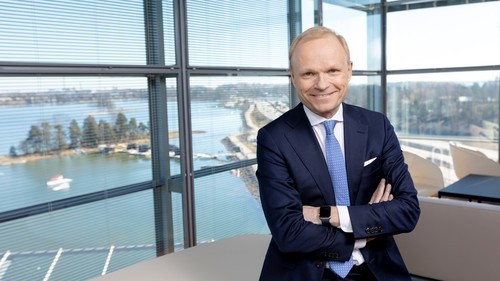 To compound it all, Nokia had been let down by a critical supplier, said Rajeev Suri, who stepped down from the CEO role last week.

Intel was the culprit, according to several analysts. The US semiconductor giant had supposedly encountered delays in its transition to more efficient manufacturing processes.

Weeks after notifying the market of its problems, Nokia boarded up its 5G radio access network (RAN) business in China, failing to land a single contract in the world's biggest mobile market.

It had already lost a massive RAN contract with Germany's Deutsche Telekom to Ericsson, which was also replacing Nokia in Vodafone's UK network.

"We have a substantial market share gain," said Ericsson CEO Börje Ekholm in mid-July. "Most of that actually comes not from the Chinese competitors, but others."

Moving on up
Yet the worst is probably behind Nokia, which has worked hard since October on a 5G revival.

Under the stewardship of Tommi Uitto, who succeeded Marc Rouanne as head of mobile networks in late 2018, Nokia has been rectifying earlier mistakes and laying the foundations of a more competitive 5G business.

As new boss Pekka Lundmark weighs his strategic options, and Huawei is sucked into the quicksand of geopolitics, Nokia's 5G health is improving.

That is largely down to the ongoing phase-out of the FPGAs. These expensive components still feature in about three quarters of Nokia's 5G products, but the level has fallen from 83% in the first quarter.

The use of less costly chips, under Nokia's ReefShark brand, is translating into better profitability. At its networks business, Nokia's gross margin rose to 35.6% in the second quarter, from just 31.1% a year earlier.

"Expanding the use of the ReefShark family is driving lower product costs, which is driving a better performance and an increased confidence in the overall portfolio, which then allows you to be more disciplined when going after deals," said Kristian Pullola, Nokia's chief financial officer, in a conversation with Light Reading last week.

But the transition will not happen overnight. Nokia expects just 35% of 5G products to use these ReefShark chips by the end of the year. Products using FPGAs will not disappear from the portfolio until the end of 2022, it says.

Investments in ReefShark system-on-a-chip (SoC) technology have also forced Nokia to lower its savings target this year by 200 million ($235 million), to 500 million ($587 million), compared with overall costs in 2018.

"We have doubled the number of SoC developers," said Uitto in a recent blog.

Increased spending on 5G is effectively coming at the expense of other product categories.

After slashing about 5,000 roles last year, Nokia last month revealed plans to cut 1,233 jobs in France, including a number of R&D positions at a former Alcatel-Lucent business developing optical equipment.

"This would be positive for Alcatel-Lucent's optical competitors such as Infinera and Ciena," said Dave Kang, an analyst at B Riley FBR. 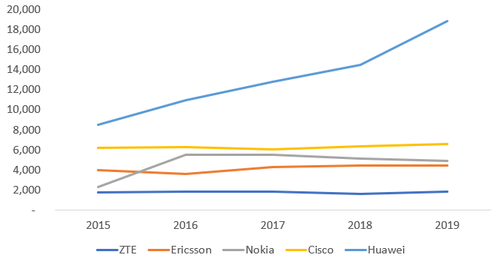 Pullola said Nokia has simply been more efficient in allocating funds to R&D activities. At the same time, the company remains on track to realize its 500 million savings target, he told Light Reading.

In its second-quarter report, Nokia said it would achieve an operating margin of 9.5% for the full year, up from 9% previously, despite a 7% drop in sales for the first six months.

Nokia also appears less dependent on individual suppliers. In recent months, it has unveiled Broadcom and Marvell as ReefShark vendors, alongside Intel.

This diversity should make it less vulnerable to any problems experienced by a particular supplier, and guard against a recurrence of the earlier product delays.

Turf wars
Outside China, it is now defending its turf, say executives. Indeed, Uitto claims to have won some 5G business from operators it has not supplied as a 4G vendor, although details have not been disclosed.

In total, Nokia says it has landed 83 5G deals, including 32 with service providers that have launched commercially. That puts it some way behind Ericsson, which boasts 99 5G contracts and 54 "live" networks.

But Nokia is confident its share of the 4G and 5G markets will remain stable at 27% this year.

The China loss can now be seen as both a positive and a negative. On the downside, it excludes Nokia from a huge mobile market, whose operators are expected to deploy about half a million 5G basestations this year alone.

As Chinese service providers prioritize those radio investments, they are also cutting back in other areas, Pullola acknowledged to Light Reading. Nokia's China revenues tumbled 41% in the second quarter, to just 302 million ($354 million).

On the other hand, as its China business shrinks, Nokia is less exposed than Ericsson if China tries to punish Western firms in retaliation for the US-led attack on Huawei.

In the second quarter, China revenues accounted for less than 6% of Nokia's total, down from 9% a year earlier. Over the same period, Ericsson's revenues from North East Asia have grown from 12% to 14% of company sales, buoyed by recent 5G wins in China.

Exiting a part of the fiercely competitive Chinese market also explains some of the recent improvement in Nokia's profitability.

Nokia now has more to gain from Huawei's misery in Europe than it has to lose in China.

The UK government has already banned operators from buying Huawei's 5G products beyond December 31. France appears to be taking similar steps, and other countries are likely to follow, as opinion turns against an increasingly aggressive China.

"We are seeing concrete mid-term opportunities, and think we are well positioned in terms of product availability and capacity," said Suri last week. "We are ready and able to provide necessary support." 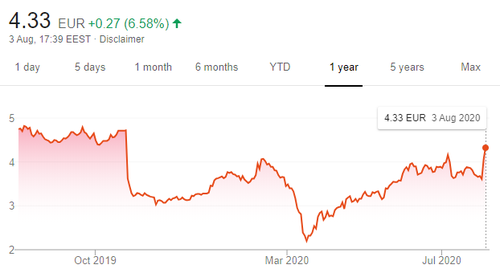 The Finnish vendor's share price closed up 13% on Friday, as it swung to a small net profit.

It was trading up another 6% this afternoon in Helsinki, and is higher now than it has been since October, when its 5G difficulties came to light. Today's gains are likely to reflect confidence in Nokia's outlook under a change of management.

Lundmark undoubtedly has a major task on his hands. Profits at the business remain thin, and there will be lingering concern about the R&D cuts outside the 5G business.

What everyone is desperate to know is whether the new boss will put assets up for sale, perhaps doubling down in some areas, or continue to promote Nokia as a vendor that can address all the different network domains.

"The team's options include continuing to execute on the 5G opportunity, or selling the company's assets to strategic buyers," said Michael Genovese, an analyst at MKM Partners, in a research note. "We think there is likely value in Nokia either way."