COMSovereign wants to be the American Huawei

Dan Hodges doesn't mince words: He hopes to obtain US government funding to position his new company, COMSovereign, as a US-based alternative to 5G equipment suppliers like Nokia, Ericsson and Huawei.

"Why is a foreign company profiting so much off of the United States when we have such advanced technology?" Hodges asked during a discussion about COMSovereign's business with Light Reading. "We can do this in a mere fraction of the cost that Ericsson, Nokia and Huawei can do these networks for. We can do them just far, far cheaper, because most of the aspects can be virtualized and have been virtualized, and actually offer a more efficient way with far fewer failures than those guys do."

Hodges said COMSovereign presents a "nightmare scenario" for companies like Nokia and Ericsson that are seeking US operators' 5G business.

And Hodges also has some sharp words for China's Huawei specifically: "With the virtualization of the network, we're way beyond what Huawei has done. So anybody that says the US is way behind, technically, is smoking crack. They have no clue. We're so far beyond them right now."

Hodges's COMSovereign strategy has been coming into public focus during the past few months. He and his partner John Howell have been combining a wide range of companies in the wireless industry via mostly stock-swap transactions to build a US-based, full-service 5G equipment provider. The goal, Hodges explained, is to wean American companies off foreign suppliers like Nokia or Ericsson and to provide a bulwark against China's Huawei, which has been accused of creating a conduit for Chinese spying with its 5G equipment. Huawei denies that charge.

Specifically, COMSovereign boasts it can "provide carriers the critical technology to transition latent networks to 5G" by offering a technological package comprising its recent acquisitions:

The company reports that its combined addressable market via the purchases tops $1 trillion. 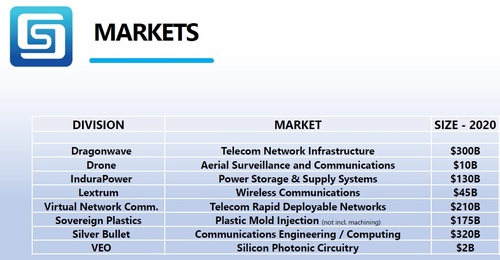 It's also worth noting that Hodges is grabbing near term opportunities, too: COMSovereign announced last month that its new Sovereign Plastics manufacturing facility in Colorado Springs, Colorado, will produce Personal Protective Equipment (PPE) for an unnamed supplier supporting the fight against COVID-19.

Made in America
When questioned whether COMSovereign would take advantage of any US government financing for homegrown 5G equipment, Hodges said: "We'd be fools not to."

COMSovereign isn't alone. Parallel Wireless, Mavenir and other US companies have also begun touting their American bona fides in an effort to court US regulators and lawmakers keen to create American jobs  and to beat China in the "race to 5G."

The notion of a race between the US and China in 5G has sparked a number of, er, innovative proposals ranging from a $1 billion fund for US-supplied open RAN technology to a US government purchase of Ericsson or Nokia to a federally-constructed 5G network to a program to rip out Huawei's equipment in US networks and replace it with "trusted" equipment. For vendors watching such proceedings, it's worth noting that the price tag for that Huawei "rip and replace" program has doubled to $2 billion in less than a year.

In his quest to take on the likes of Nokia and Ericsson, Hodges acknowledged COMSovereign doesn't have the same weight and heft as its larger rivals. But he argued COMSovereign is small and agile and can partner with suppliers like CommScope for antennas and Xilinx, Altera and Intel for basestation chipsets where necessary. It's worth noting that all those companies are also based in the US.

"We are just beginning ramp," Hodges said, arguing that "official" 5G won't be available until the 3GPP standards organization issues its "Release 17" package of 5G specifications, which it is currently scheduled to do in 2021. That timeline, Hodges explained, ought to give COMSovereign the chance to unify its offerings and hit the market with a full portfolio of 5G products stretching from a virtualized core to high-powered, full-duplex transmitters. He said the company would do so by leveraging the customers of the companies it has acquired  DragonWave-X, for example, already counts a range of high-profile wireless network operators as customers.

A tall order
Industry analysts say the odds are stacked against COMSovereign.

"While the barriers to entry for 5G virtualized network vendors are substantially lower than ever before and Tier 1 operators are willing to take more chances, the hurdles are still substantial," noted analyst Roger Entner, founder of Recon Analytics. "There is no standardized hardware for virtualized RAN equipment. The leader in the field, Rakuten, had to have it built and designed just for them. Companies like Mavenir and Aliostar have software ready for many of these functions and have established relationships."

Continued Entner: "It will be very hard, but not impossible, for a newcomer like COMSovereign to enter the market. It took Samsung only ten years to get a foothold in the US equipment market and they still haven't succeed to get a European customer for the network infrastructure equipment."

Others agreed. "It will take at a minimum a decade for COMSovereign to come any way near its stated goal of rivaling Ericsson, Huawei or Nokia," said analyst Daryl Schoolar, practice leader at Omdia, a market research firm that, like Light Reading, is part of Informa Tech. "A more realistic goal would be to try and rival the likes of Altiostar, Mavenir and Parallel Wireless. Those three companies are further along than COMSovereign when it comes to gaining share in the mobile infrastructure space and will be competing as well for any available US government funding."

Uplisting its financing
Nonetheless, As COMSovereign prepares to enter the 5G equipment arena in full, Hodges said the company is working to "uplist" its financial position by entering a reputable Wall Street stock exchange like the Nasdaq or NYSE.

"We think that equity play is coming soon," he said, noting that he and his partner have put roughly $15 million into COMSovereign without yet taking a salary. He said COMSovereign currently has around 4,000 investors, but that moving to a Wall Street exchange "makes it much easier to finance."

That strategy makes sense considering the company's latest quarterly financial filing provides only the financial details of Drone Aviation Holding and no other company.

A colorful leader
COMSovereign appears to be one of several interests for Hodges.

In one of his company's biographies, he's listed as an executive with a "broad, multi-disciplinary background including more than 20 years of experience in public markets as an underwriter for more than 200 publicly traded entities. The majority of his time was spent in corporate structure, construction of SEC filings, and M&A activity."

Another biography continues: "From 1995 to 2002, Mr. Hodges took part in the formation and/or public registration of multiple public companies as an investor. Privately, Mr. Hodges has been involved in real estate developments and residential subdivisions in Southern Arizona since 1993."

Hodges first made a career in the energy industry, serving as the chief executive of oil, gas and coal mining companies including Fidelis Energy. Indeed, he wrote a book on US energy independence in 2007 called "FutureSpan."

For example, Hodges said he "procured nuclear battery patent applications from their inventor, finished initial research on the technology, and prosecuted them into issued patents in 2009 with an initial appraised value of over $25MM."

Hodges also founded Medusa Scientific, a science and engineering research and development company that at one point worked on a "jockey cam" helmet to stream horse races from the position of the rider. "When one of Medusa's technologies showed commercial promise, he made the decision to spin it off and formed TM Technologies, a 'sister-company,' to commercialize the proprietary modulation technology," Hodges' biography states.

One of Hodges' two patents stems from his work with TM. The other is a "Method and System for a Grass Roots Intelligence Program" that involves artificial intelligence and threat assessment.

In 2017, he formed Transform-X with $1.1 million in private financing to purchase DragonWave out of bankruptcy, an action that roughly marks the beginnings of COMSovereign.

Apart from his business efforts, Hodges also served in the US military for 26 years, retiring in 2014 as an F-16 flight instructor in Tucson, Arizona. According to his LinkedIn page, he also founded the Artifact Foundation to "promote the study, meaning and validation of historical ancient Scriptural manuscripts, scrolls and codices, and exhibit them throughout the world." This year he's scheduled to finish a graduate degree in Divinity from Liberty University, a private evangelical Christian university founded by Jerry Falwell Sr. and now run by his son, Jerry Falwell Jr.