Charter to add 5G to the menu in Q1, will 'likely' be a participant in CBRS auction

Charter Communications' new mobile business clicked in Q4 2019, as the cable operator added another 288,000 lines in the period, pushing its grand total to 1.08 million.

Looking ahead, Charter, which has an MVNO relationship with Verizon Wireless, expects to launch mobile 5G services sometime in Q1 2020. The cable op also expects to toss its hat into the ring when the FCC moves ahead with an auction of CBRS spectrum, currently scheduled for June. That could allow the company to build its own wireless network and move its customers' traffic off Verizon's network in dense traffic areas. 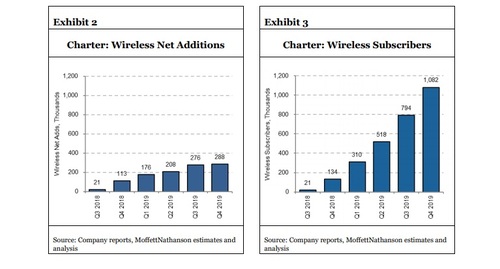 "We're interested in midband spectrum," Tom Rutledge, Charter's chairman and CEO, said on Friday's earnings call, referencing the coming CBRS auction. "We're likely to participate in that auction. I think there's an opportunity for us  We're carefully considering our options there."

Charter hasn't spelled out how much traffic it might ultimately be able to offload via its own infrastructure, and continued to dance around questions about whether Charter might look to renegotiate its MVNO deal with Verizon Wireless or forge a new one with another mobile operator.

"There's no immediate plan to change our fundamental relationship with our carriers," Rutledge said, reiterating later that the operator remains happy with its agreement with Verizon.

But he left the door open: "Over time, as the market evolves and speeds go up and capacity goes up, the economics will change and we'll take advantage of them over time as the market unfolds."

Craig Moffett, analyst with MoffettNathanson, has contended that both Comcast and Charter may need to revisit their MVNO deals in order to squeeze profits out of their respective mobile businesses. As the overall US cable mobile base continues to expand (today it's at about 3 million lines/subscribers), Moffett believes cable operators will gain more and more leverage in future negotiations with wireless carriers -- if not now, then later. 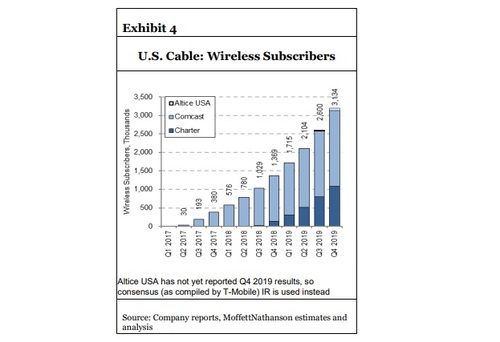 "From a financial standpoint, [US cable's] current wireless business won't matter much," Moffett wrote in a research note issued Friday. "But little by little, as they begin to offload traffic onto their own small cells, their profitability will rise  with or without a new MVNO deal."

For now, Charter's mobile business is about helping to drive its home broadband and overall "connectivity" business. Charter added 339,000 broadband subs in Q4, slightly ahead of a year-ago gain of 329,000.

Meanwhile, video losses continued. Charter shed about 101,000 video subs in the period, accelerated from a loss of just 22,000 in the year-ago quarter.

Charter still views video as an attractive piece of its broader connectivity business, but pay-TV is "not material to what drives our economic model," Rutledge said.

That said, Charter believes there's an opportunity to continue to work with programmers for the operator's existing pay-TV bundles and to help them sell and distribute new streaming products.

"We can hold both thoughts in our head at the same time," Rutledge said, citing Charter's ongoing integrations of OTT services such as Netflix on its own set-tops, its partnership with Apple TV, its own video apps for other third-party streaming devices and the exploration of a Flex-like platform that Comcast is targeting to broadband-only subs.

Capex update
Charter said Q4 2019 capex was $2.28 billion, a year-on-year decline of $196 million thanks in part to a lower distribution of MSO-supplied set-top boxes and a higher mix of customers that use other streaming devices to get video.

Charter also saw a $50 million decrease in scalable infrastructure in the period now that its DOCSIS 3.1 network has long been completed.

Rutledge talked up the potential for "10G," an industry initiative that targets multi-gig symmetrical speeds (up to 10 Gbit/s) along with low-latency capabilities. But there's no expectation yet on when Charter will pursue that path.

"There's no immediate need to deploy a new upgrade to the marketplace today," Rutledge said, adding that Charter should be in position to add new capabilities on an incremental basis.