What a difference a deal makes.

After having a somewhat bearish view on Dish Network's prospects as a wireless operator with long-term viability, MoffettNathanson analyst Craig Moffett has had a change of heart in the wake of Dish's "game changer" of a network service agreement with AT&T.

That multi-year deal, announced July 19 and worth at least $5 billion to AT&T, makes AT&T Dish's primary network service partner for Dish's MVNO customers. And, according to Moffett, the length of the deal gives Dish critical time to build out its national 5G network.

And, when it's all rolled up, the deal with AT&T effectively lowers the risk of a Dish bankruptcy, increases the likelihood of a strategic partnership and future financing, and does not rule out a future sale of the company (possibly with AT&T playing the role of buyer), the analyst surmised.

"More than that, AT&T has now afforded Dish enormous optionality," Moffett explained, noting that a scenario in which Dish goes bankrupt is all but off the table. "That their MVNO agreement now extends well beyond the expiration of their no-sale prohibition (2026) means that even an eventual sale, of either their spectrum or their entire business, can no longer be ruled out."

In Moffett's view, the length of Dish's agreement with AT&T is key, as his bearish outlook on Dish was largely based on an MVNO deal with T-Mobile that was set to sunset in 2027.

"Without an extension, Dish faced an existential cliff," he wrote. "They would have only two years between their 2025 FCC buildout deadlines and the expiry of their MVNO deal, by which time they would have had to achieve not just sufficiency but ubiquity. That didn't leave them close to enough time."

Bankruptcy for Dish wasn't just a possibility, it was Moffett's "base case" for the company until AT&T entered the picture.

"Now, with a stroke of the pen, all those risks are off the table. Dish is virtually assured a path to viability," Moffett explained, while acknowledging that Dish's 2025 buildout deadlines aren't any easier to achieve even with the AT&T deal. "But the FCC deadlines were never the issue. It was what would come after," the analyst added.

Per the consent decree between Dish, T-Mobile, Sprint, the US Department of Justice and the FCC, Dish is on the hook to build out wireless coverage to 70% of the US population by 2025. While that's not trivial, what came after that is what mattered, as coverage of about 95% of the population would amount to "table stakes" for Dish if it were to provide competitive services.

"Dish's MVNO agreement with T-Mobile gave them just two years beyond their 2025 FCC deadline to achieve that milestone. That wasn't just going to be hard; it was likely going to be impossible," the analyst noted.

With such a cliff in front of Dish, securing a major wholesale customer (Amazon being among those rumored) as well as financing to even start the network would be a tough one to pull off if Dish had no clear path to viability beyond 2027.

But Moffett reckons that Dish can now rely heavily on AT&T's network in rural markets, possibly indefinitely, thus changing Dish's future build requirements and costs. The deal with AT&T "all but ensures that Dish will be a viable player in the wireless market for the foreseeable future," he declared. 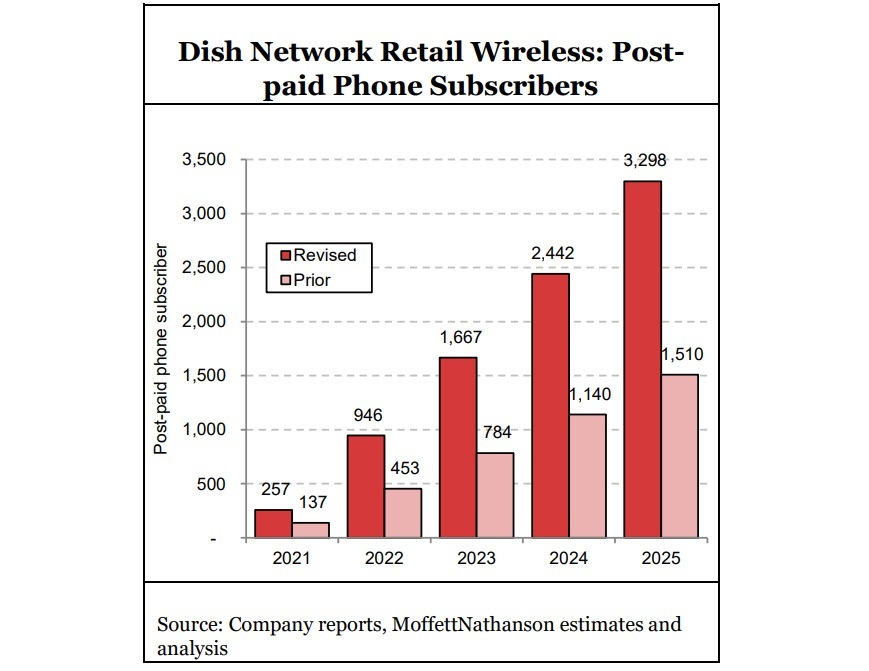 For the MVNO piece alone, he estimates that Dish pays T-Mobile a sum in the range of $1.5 billion to $2 billion a year, but believes it's likely that the new agreement with AT&T is more on a per-gigabyte basis. "After all, the Dish/T-Mobile MVNO agreement was concocted as part of a workaround necessary to allow the merger of T-Mobile and Sprint," Moffett points out. 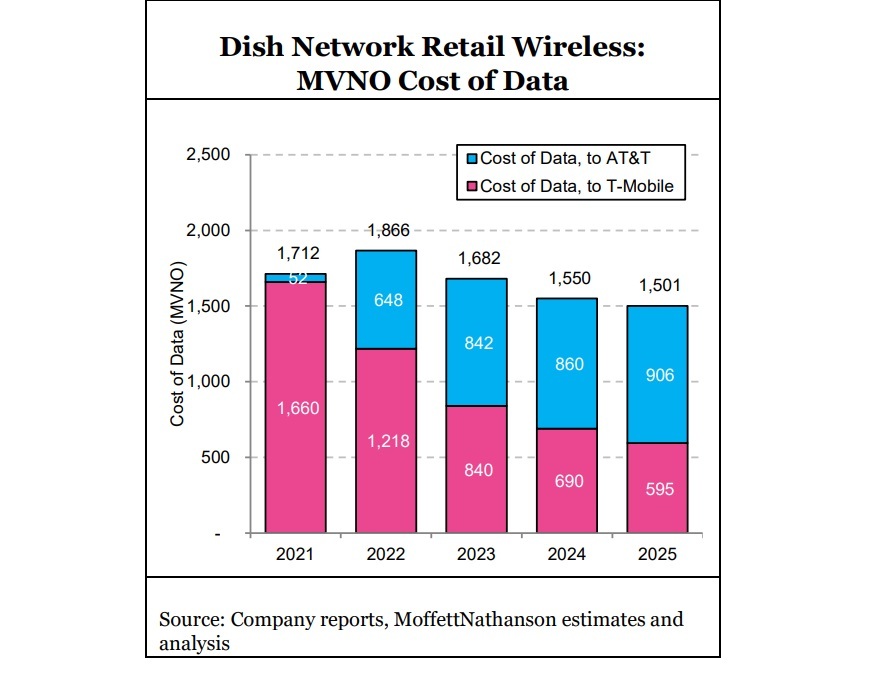 Dish has already agreed to pay AT&T at least $5 billion over the span of the ten-year deal, with an undisclosed annual commitment. Speaking on AT&T's Q2 call last week, AT&T CEO John Stankey noted that the financial commitments are "more front end loaded," with optionality on how AT&T might get access to some of Dish's spectrum holdings.