US wireless networks are holding up to COVID-19

US wireless network operators like AT&T, Verizon, Sprint and T-Mobile are widely reporting significant increases in messaging and voice calling on their mobile networks as Americans increasingly hunker down at home to stop the spread of the new coronavirus.

But none of the companies has reported much of an increase in overall wireless data traffic.

Nonetheless, at least one network-monitoring company found a dip in US mobile providers' data speeds during the past week. 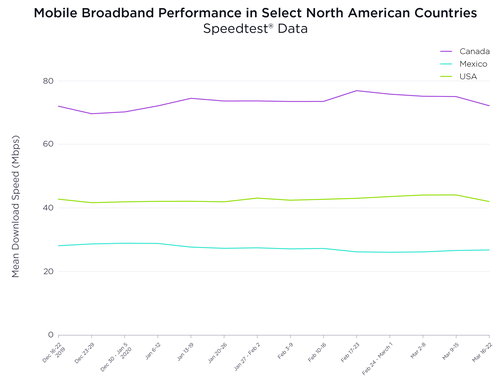 Ookla Speedtest, which measures the performance of fixed and mobile networks, reported a decline in average mobile network speeds in Canada and the US during the week of March 16-22. Click here for a larger version of this image.
(Source: Ookla Speedtest)

"The networks seem to be holding up really well," Evan Swarztrauber, policy advisor to FCC Chairman Ajit Pai, said Tuesday during a webinar hosted by Recon Analytics' Roger Entner. When questioned whether Netflix would need to throttle its video streams to avoid overloading networks, as it has done in Europe, Swarztrauber said "we don't think that's something that's necessary at this time."

He added that some US providers have told the FCC that network traffic related to the COVID-19 outbreak hasn't been as heavy as streaming the season finale of HBO's Game of Thrones TV show, for example.

However, some major video streaming providers appear to be taking some proactive steps anyway. For example, YouTube on Tuesday said it will default its video streams to standard definition for 30 days on a global basis, after initially doing so only in Europe.

What's happening on US mobile networks
Based on reports from operators like Verizon and AT&T, it appears that traffic spikes related to the new coronavirus are primarily affecting wired networks, not wireless networks. That's likely because Americans are staying at home  and using their wired network  instead of traveling and relying on their cell phone's connection.

That's probably a good thing, according to the Wall Street analysts at New Street Research: "Fixed broadband connections already carry roughly 80% of traffic consumed on mobile devices today, via Wi-Fi; the doubling in usage that is being seen on Wi-Fi today might bring the mobile network to its knees if households didnt have Wi-Fi, particularly if there is a similar increase in data usage on mobile devices over Wi-Fi," they wrote in a Tuesday report to investors.

That said, traffic on wired networks in the US is clearly rising. For example, AT&T said Tuesday that its "core" network traffic  which includes its business, home broadband and wireless usage  was up 27% Monday compared to the same day last month. Separately, Verizon late last week reported a 75% increase in traffic over its combined wired and wireless networks.

The fact that no major US operator is reporting significant increases in mobile data traffic is noteworthy considering that AT&T, Verizon and T-Mobile are all making use of excess spectrum from the likes of Dish Network and Comcast. This unprecedented development is geared toward increasing capacity on their mobile networks  T-Mobile, for example, said the action doubled its LTE network capacity in 600MHz spectrum.

Counting the calls and texts
But based on reports from all the major US wireless operators, the real mobile network traffic spikes during the outbreak of COVID-19 so far are due to Americans' calling and texting, and not necessarily their web surfing.

Interestingly, both Verizon and T-Mobile reported a decrease in movement among their wireless customers. T-Mobile said it noticed an 86% increase "in subscribers with limited mobility, meaning they connect to cell sites only in their primary location." And Verizon reported that mobile "handoffs"  the times when a customer's data session moves from one cell site to another  are down 27% compared with a typical week, which the operator said indicates that people "are increasingly staying in place."

Finally, it's worth noting that some regulators believe wireless and wired operators should be required to provide more detailed and consistent reports on the status of their networks during disasters like the outbreak of the new coronavirus. For example, FCC Commissioner Jessica Rosenworcel has repeatedly urged the agency to require operators to submit network performance reports with details, including download and upload speeds.

Clifton K Morris 3/25/2020 | 2:38:23 PM
Re: Because WiFi Yes WiFi usage is definitely obvious. Purely anecdotal, but earlier, I called Comcast to switch out cable modems. I learned that the rep was working from home in Washington State. We talked about the makeshift hospital, which I thought was in Marymoor Park, but learned it was actually a bit north of Seattle proper, and how I met Jay Inslee while he was still serving in the US House Of Representatives.

The Comcast rep was also looking forward to a time when they could take the family to Universal Studios... which apparently is a benefit Comcast employees enjoy. 🙂

Overall, it was great to hear Comcast was allowing people to work from home even in states under mandatory lockdown. They activated my new 32-channel DOCSIS modem and I immediately saw a speed improvement over the old 8 channel model.

However, and what surprised me the most was when I logged into the administrative console of the new cable modem, it apparently had connected to Comcasts OFDM 1G network as well as utilizing the legacy DOCSIS 3.0 32 channels. Seems Comcast has done a great job of adding capacity even in the rural area where I live. We may need to give 1G speeds a spin.
Reply | Post Message | MESSAGES LIST | START A BOARD