The slowdown was expected. Disney+'s growth "has hit some headwinds" due in part to production slowdowns that caused Disney's slate of new content to come in a bit light, Disney CEO Bob Chapek warned in September, at a Goldman Sachs event. 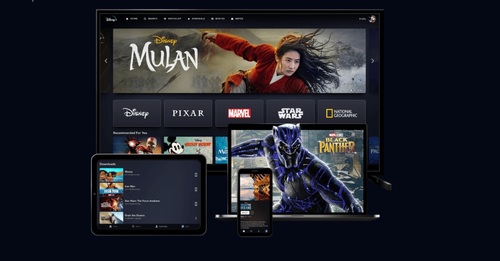 Disney+ ended fiscal Q4 with 118.1 million subs worldwide, and is still expected to reach as high as 260 million by 2024.
(Image courtesy of Disney)

Despite that hiccup, The Mouse remains undaunted about Disney+'s potential. Speaking on today's earnings call, Chapek said Disney+ remains on track to reach 230 million to 260 million Disney+ subs by 2024. "We remain focused on managing our DTC business for the long term, not quarter to quarter," he said.

The average monthly revenue for Disney+ dropped again  from $4.52 to $4.12. As has been the case in recent quarters, the decline was again due to a higher mix of Disney+ Hotstar subs in the period versus the prior-year quarter. Disney+ Hotstar, a service focused on India, Malaysia and Thailand, carries a lower ARPU than the Disney+ service in other markets.

Some help from Hulu

The ESPN+ streaming service added 2.2 million subs in Q4, taking its total to 17.1 million. The Q4 result improved on the 1.1 million subs ESPN+ added in Q3. With everything rolled up, Disney ended Q4 with 179 million subs across its direct-to-consumer (DTC) portfolio, up 60% year-over-year.

Disney's DTC revenues climbed 38%, to $4.56 billion. However, operating losses widened to $600 million, an increase over the $400 million lost a year ago; the losses were primarily due to higher costs at Disney+, as well as higher marketing and sports programming costs at ESPN+.

Disney's total reported revenues of $18.53 billion were up 26% year-over-year, but off from the $18.79 billion expected by Wall Street.

Disney estimated costs of $1 billion for fiscal 2021 to address government regulations and the implementation of safety measures for employees, guests and talent linked to the COVID-19 pandemic.