Comcast has sparked the rollout of Disney+ and ESPN+ on X1, its primary pay-TV platform, and Flex, a streaming product targeted to the cable operator's broadband-only customers.

Comcast said Disney+ will be rolled out gradually to all X1 and Flex subscribers in the coming days, while ESPN+ (via the ESPN app) will launch on all Flex devices today and start to reach X1 devices in the coming weeks. 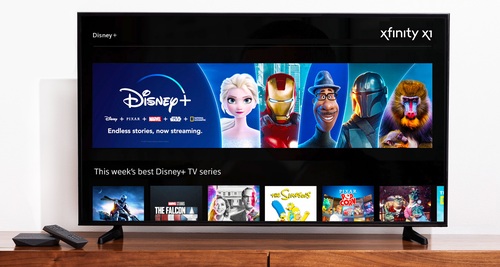 Financial terms were not announced, though revenue-sharing agreements between pay-TV distributors and premium streaming services are becoming increasingly commonplace.

The rollout on Comcast's platforms will boost exposure for Disney+ and ESPN+. Disney+, a streaming service launched in November 2019, recently surpassed 100 million subscribers worldwide. ESPN+ ended Disney's fiscal Q1 with 12.1 million subscribers. Comcast has about 19 million residential pay-TV subscribers, but not all of them are on the X1 platform. The cable operator has deployed more than 3 million Flex devices so far.

The latest additions from the Disney streaming stable could likewise increase the appeal of X1 and Flex as Comcast explores ways to deploy and market its software/streaming platforms outside its traditional cable footprint and compete more directly with retail streaming platforms from the likes of Roku, Google, Apple and Amazon, as well as TV makers such as Samsung, LG Electronics and Vizio.

Comcast has been hinting at its ambitions to expand the reach of its streaming technologies on a global basis, with reports indicating that the cable operator has held talks with Walmart about a smart TV partnership.