AT&T shed another 620,000 "premium" TV connections in the period, dropping its grand total to 15.88 million, down 14% versus the year-ago period. Those losses, which include DirecTV, U-verse TV and the relatively new AT&T TV business, improved from a year-ago loss of 897,000 subscribers. AT&T is in the process of spinning off DirecTV and other pieces of its US video unit into a separate company – AT&T will own 70% of the spin-off's common equity and TPG will own 30%.

HBO Max gains in the period were fueled by a day-and-date strategy that allows Warner Bros' 2021 movie slate to premiere concurrently at theaters and on the streaming service, along with a "steadily strengthening post-COVID content slate," John Stankey, AT&T's CEO, said on today's earnings call. He said the company has added more than 11 million domestic HBO Max and HBO subs in the last 12 months.

WarnerMedia is on track to launch an ad-supported version of HBO Max in June, but has yet to announce pricing. Stankey hinted that the company will use its prepaid wireless sales channel to help pump sales of the coming ad-supported option for HBO Max. 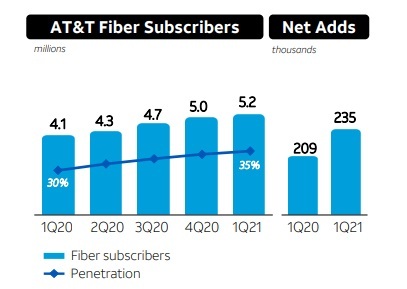 AT&T has added more than 1 million fiber customers over the last four quarters. Current plans are to deploy FTTP to another 3 million-plus residential and business locations in 2021. AT&T has already expressed plans to add another 4 million locations in 2022.

Stankey said it was too early to offer definitive comments about the $100 billion for broadband that's tucked into President Biden's proposed $2 trillion infrastructure plan.

"The infrastructure bill, euphemistically speaking, is a little bit of a large, amorphous thing right now," he said.

Stankey expects it to pass whether it ends up being a bipartisan bill or not. "My opinion is that that it will go through some changes. I think in aggregate the size of it will probably be different than what it was proposed to be."