Viacom wrapped up its $340 million acquisition of Pluto TV last month, and it hasn't taken long for the programming giant to determine how that free, ad-based OTT-TV service fits into its plans to reach millions of eyeballs that live beyond the borders of pay-TV.

At its "NewFront" (for the OTT video ad market) today, Viacom announced it will soon launch several free streaming channels on the Pluto TV lineup, along with several "Signature Channels" and a smaller group of "pop-up" channels.

On the co-branded side, Viacom has set a May 1 launch of the following: BET Pluto TV, Comedy Central Pluto TV, MTV Pluto TV, Nick Pluto TV, Nick Jr. Pluto TV and Spike Pluto TV. All of those channels, to be offered for free on Pluto TV, will feature a linear-style lineup of shows and specials from those individual networks. 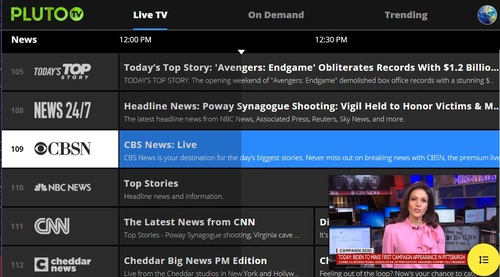 Viacom is about to add a wave of new, free streaming channels to Pluto TV's ever-expanding lineup of ad-based, OTT-delivered programming.

Rounding out Viacom's initial new wave of streaming services for Pluto TV will be "pop-up channels" tailored for binge-style, marathon series viewing. The first one will be MTV's The Hills, set to launch on June 24, giving viewers a free way to catch up on past episodes before the reality TV series is revived, as The Hills: New Beginnings, on June 24.

Counteracting the decline of pay-TV
Viacom is expanding aggressively into ad-based, free OTT in part to help counteract the ongoing decline of traditional pay-TV. Viacom has tried to blunt that trend by getting carriage on new virtual MVPD services. However, even those offerings have become less attractive to cost-conscious cord-cutters as slimmed down, subscription OTT-TV services such as YouTube TV, fuboTV, DirecTV Now, Philo and others have been forced to raise rates in recent weeks to cover programming costs and expand their super-thin margins.

Getting carriage on virtual MVPD services have helped programmers like Viacom manage the cord-cutting trend, but it hasn't been a one-to-one replacement. However, getting exposure for shows and network brands on a free service like Pluto TV should help Viacom engage with consumers who have left the pay-TV arena or never intend to enter it at all.

"Going forward, we worry that the vMVPDs, now with higher price points, will not be able to offset that [pay-TV subscriber] erosion," Michael Nathanson, analyst with MoffettNathanson, noted today in a report on the ever-evolving market for streaming video. "Linear ratings are still falling as fast as ever, but a still strong scatter market and increasing commercial load are helping to offset that pain. Further, the adding back of digital dollars from places like Pluto TV, Hulu and various digital initiatives (CBS, Discovery, Fox) is working to slow the linear fall."

Pluto TV, which claims to have more than 15 million monthly active users in the US, could help to ease some of that pain for Viacom, which, Nathanson points out, is suffering from a TV ratings decline across numerous key networks in its portfolio, including Nickelodeon, MTV, Comedy Central, BET and Paramount.

As pay-TV subscriptions continue to flag, it's clear that TV programmers are hopeful that putting more emphasis on free OTT services will pay off with more viewership of their cornerstone programs, exposure gains for their network brands and a boost in advertising revenues.