It was a bit of a shock to hear Charter Chairman and CEO Tom Rutledge acknowledge this week that his company had even entertained the thought of syndicating Comcast's X1 video platform.

After all, Charter, under Rutledge, has been going in its own direction with video using its WorldBox -- a device outfitted with a downloadable security system that enables it to run on any of its cable systems -- and an interface developed by ActiveVideo (a company now co-owned by Charter and CommScope, via the latter's acquisition of Arris), alongside a marketing and technology partnership with Apple that, in part, has resulted in the tight integration of Charter's pay-TV app and the Apple TV box.

"We've had discussions with [Comcast] about licensing their X1 platform and their new IP video platform," Rutledge said on Monday's earnings call in response to an analyst's question. "And if we can make that the best platform for us, we'd certainly be willing to do that, and we think they'd be a great provider."

But he also pointed out that Charter is "down the road with our own user interface," and mentioned that Charter prefers to maintain control of its UI and the ability to change it and ensure that it fits with the company's marketing strategies.

"If we can sort of check all the boxes in terms of having complete flexibility and low cost, we could become a vendor of Comcast in terms of our platform. To date, we haven't been able to do that," Rutledge said.

Charter, I'm told, will continue on its current trajectory for the most part, as the company is extremely reluctant to be beholden to Comcast in this way and to cede too much control of the engineering and roadmap of its video product.

At the same time, it's absolutely true that high-level execs at Charter and Comcast have held discussions about X1 syndication. Sources tell me that these conversations have gone on for years on a semi-regular basis, with Comcast stating its case each time why Charter should consider it. According to two sources, members of Charter's video team were in Philadelphia within the past week or two to continue those talks and take a fresh look at X1.

And while there appears to be little chance that a fully fledged X1 syndication deal between Comcast and Charter would manifest itself, there could be opportunities for Charter to adopt some other services and features of X1, such as its voice-based navigation and search platform.

Comcast has already indicated that it's technically possible to modularize that voice technology without requiring the full X1 platform. Sky, the UK-based pay-TV and media company that's now part of Comcast, is in the process of enhancing its products with Comcast's voice tech as well as xFi, Comcast's whole-home WiFi management platform. It's not clear if Comcast would be interested in separating out an element such as voice navigation to Charter or any other service provider that it did not own.

And X1 isn't a one-trick pony from a services standpoint. In addition to supporting residential video (blending traditional pay-TV with OTT sources like Netflix and YouTube), it's now being used to serve hotels and restaurants and other businesses, to underpin on-campus video services at dozens of colleges and universities and, most recently, is powering Xfinity Flex, a new video streaming/home networking management product targeted at Comcast's broadband-only customers. 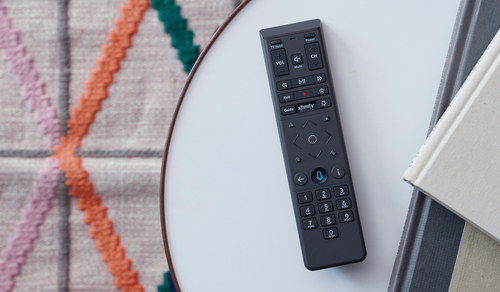 Comcast is working with new UK-based corporate cousin Sky to integrate X1's voice navigation and search capabilities into Sky's video platform, a clear indication that it's technically possible to deploy that voice technology without the full X1 platform. Pictured is the recently redesigned X1 voice remote, the XR15.

So, maybe those X1-related discussions could result in something that could suit Charter.

Still, it was a surprise that Rutledge even acknowledged having any interest in X1 at all. When the question came up, I assumed he would simply swat it away and say something along the lines of, "No way, no how."

Beyond perhaps being in a charitable mood, surely there had to be a deeper, more strategic purpose behind his response.

This is sheer speculation, but perhaps Rutledge did this to deliver a message to Charter's current video technology vendors, essentially telling them not to get too comfy and to point out that Charter has other options if need be. One of those tech partners, Zodiac, recently cleaned house and installed a new CEO (former Comcast exec Derek Harrar), and another, Arris, recently merged with CommScope. Arris, of course, is also making X1 boxes for Comcast, so a syndication deal between Comcast and Charter seemingly would not inflict much damage on the vendor in that respect.

"There's no downside for him [Rutledge] to leave that door open and have people, including Charter's suppliers, interpret it in different ways," says an exec with a cable tech vendor.

But the bigger question is if these talks will lead to any true upside for Charter. If Comcast is willing to break out some pieces of X1 that Charter desires, perhaps it could turn into something that could work for both sides.

Like what we have to say? Click here to sign up to our daily newsletter
COMMENTS
Newest First | Oldest First | Threaded View
Add Comment
Be the first to post a comment regarding this story.
EDUCATIONAL RESOURCES
sponsor supplied content
High Performance Video Transcoding on ADLINK AdvancedTCA Processor Blades with Intel Media SDK
Educational Resources Archive
More Blogs from The Bauminator
Commercial break: Netflix weighs whether ads will ease sub slippage