The same market disruption hitting residential pay-TV is providing a ripple effect across the landscape of video services for restaurants, taverns, retail outlets and various other commercial establishments.

Comcast Business is attacking that market with a version of its X1 platform tailored for business customers. Dish Network and Charter Communications have both upped their game to serve hotels. And DirecTV, despite the recent struggles of AT&T's overall video business, remains a major force in this sector. 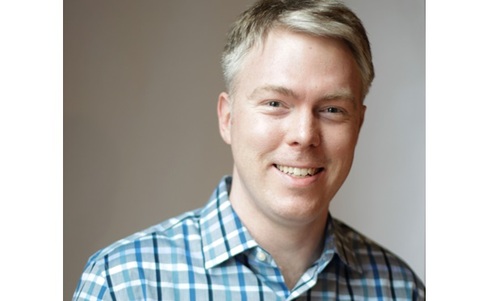 Amid this activity among US pay-TV players, a startup called Rockbot is also seizing upon this opportunity. It is offering an OTT-delivered blend of news, sports and entertainment that can complement -- or sometimes replace -- what's being offered by the big guys.

From streaming music to OTT-TV
Google-backed Rockbot cut its teeth on delivering streaming music services to business customers, and has since branched off into the world of TV. But rather than focusing on a service centered on highly priced networks like ESPN and expensive bundles with local broadcast TV, Rockbot TV has taken a more economical route with a streaming lineup that includes a blend of sports, news and entertainment/lifestyle. Networks on that slate include Bloomberg TV, Outside TV, Insight TV, Newsy, FailArmy, The Pet Collective, Stadium, ACC Digital Network and SportsGrid, a network focused on sports gambling, among others.

Rockbot started its OTT-TV pursuit after realizing that the video industry has started to unbundle, allowing for new entrants to develop a new set of streaming content for the commercial sector, explained Garrett Dodge, Rockbot's co-founder and CEO.

Rockbot began testing its new OTT-TV service this summer and launched it commercially earlier this year. An initial video customer is the Hard Rock Hotel in Las Vegas, which also uses Rockbot's music service. Dodge said the current crop of Rockbot TV customers includes legacy customers that already use its streaming music service alongside a batch of businesses that are new to Rockbot. Some include smaller entities, such as pubs, as well as much larger customers with multi-location businesses. 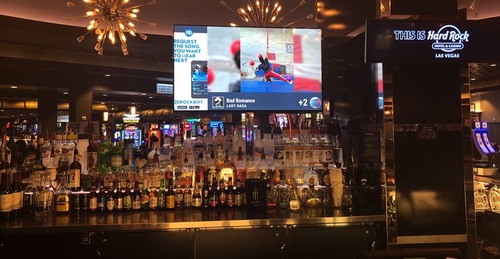 The Hard Rock Hotel in Las Vegas is one of the first to roll out Rockbot's new TV service.

"Our business crosses all customer sizes and verticals," said Dodge, a hospitality industry vet who was also a founding member of the Innovation Team at Caesars Entertainment.

Dual use-cases
Early on, Dodge says Rockbot TV has been serving two use-cases -- as a replacement and a complement.

On the replacement side, Rockbot TV can function, in a sense, as a cord-cutting option for businesses that don't need (and don't want to pay for) a large and much more expensive TV package. One example: a business with a waiting room or lobby with a small number of TVs tuned all day to one news channel.

As an augmentation option, Rockbot can also deliver video to larger commercial businesses with many TVs that can deliver a mix of alternative channels that fall outside a traditional pay-TV package. Sports bars, for example, might also be interested in fresh or different programming options during non-primetime hours that are beyond the norm.

"Typically, that's been ESPN on mute," Dodge points out.

Rockbot's platform also allows business owners to deliver marketing and branding messages that are wrapped around the TV broadcast.

With its programming and tech combined, Rockbot TV is being sold for $25 per player per subscription, Dodge said.

Notably, Rockbot TV also has a linkage to Pluto TV, the free, ad-supported OTT video service acquired by Viacom earlier this year for $314 million. Tom Ryan, Pluto's founder and CEO, is one of Rockbot's advisors. Pluto TV's lineup of 200-plus channels would seem an obvious fit should Rockbot desire to expand its lineup for business customers. 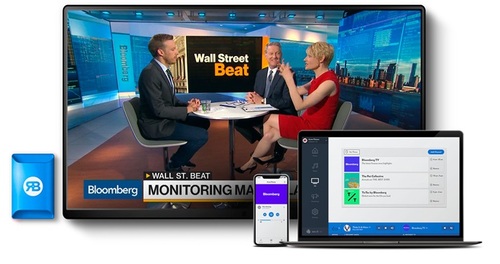 Rockbot developed its software and interface for the video product in-house, and uses a commercial-grade media player to stream video to the TV.

Dodge wouldn't comment on any specific partnerships involving Pluto TV, but allowed that "there's certainly an opportunity to work with Pluto and others."

Founded in 2010, Rockbot has raised about $5.1 million, with Google Ventures and Universal Music Group among its investors. The company employs almost 40 people today and expects to expand its ranks in 2020, Dodge said.

Like what we have to say? Click here to sign up to our daily newsletter
COMMENTS
Newest First | Oldest First | Threaded View
Add Comment
Be the first to post a comment regarding this story.
EDUCATIONAL RESOURCES
sponsor supplied content
The VOD Factor
Just You, Me and the TV: Shifting to a Direct Customer Relationship Model
Video to the CDNth Degree: Multi-CDN Delivery Optimized for Big Video
Educational Resources Archive
More Blogs from CxO Spotlight
Vewd CEO pushes Operator TV play