Developing and delivering ad-supported, "free" OTT video services sure seems to be a pricey proposition. Those services need to feed their viewers with great content, and procuring great content isn't getting any cheaper.

Tubi seems to know this pretty well. The company behind an ad-based, multiscreen OTT service announced Wednesday that its business is clicking, with revenues growing 180% in 2018, and that the money that flew in the door in Q4 2018 was more than what Tubi generated in all of 2017.

To top that off, Tubi, which was integrated with Comcast Corp. (Nasdaq: CMCSA, CMCSK)'s X1 platform last November, also turned a profit in Q4 2018, and saw viewers watch 4.3 times the amount of content in 2018 than they did in 2017. Following launches in US and Canada, Tubi is now looking to bring the service to more international markets. (See Comcast Adds Tubi to X1's OTT Video Blend .)

So, yeah, things are looking up.

But, despite all this good news, there doesn't appear to be enough revenue or profits coming in yet, as, Tubi -- oh by the way -- also announced it had closed a $25 million growth capital facility with Silicon Valley Bank, and it will plow that money "across all fronts, including content acquisition and marketing."

Privately held Tubi, which has already raised $35 million and counts MGM and Lionsgate among its backers, also said it will spend "9 figures" on content acquisition in 2019, and build on a library that has already ballooned to about 12,000 movies and TV shows. The privately held company didn't give out a specific number for that expected 2019 content outlay, but we're talking more than $100 million as Tubi tries to make its mark in free OTT and as it becomes clearer that consumers won't have the stomach or the wallet size to buy eight different subscription video services.

He readily admits that Tubi is built on a "virtuous cycle" -- more content is needed as the service draws more viewers. And getting more content costs more money.

Tubi's making a big bet. And it's making that bet as analysts and industry watchers are starting to scrutinize the drunken sailor-like spending spree Netflix Inc. (Nasdaq: NFLX) has been on for its subscription-based business, wondering if that can be sustained before the wheels come off. (See Netflix Adds 8.8M Paid Streaming Subs in Q4, Expands to 139M Worldwide and Netflix Raises Prices as Content Spending, OTT Competition Heat Up.) 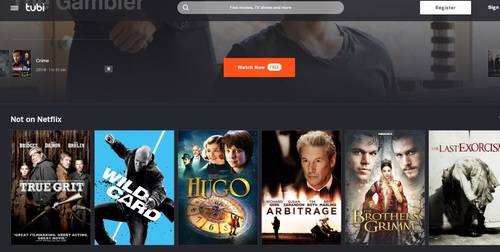 To push its free, ad-based content agenda, Tubi likes to spotlight some content that isn't offered on the popular SVoD service.

Of course, Tubi's not the only one spending big on free OTT. Viacom Inc. (NYSE: VIA) is splashing out $340 million for Pluto TV, a linear-style, ad-based free video services. And Vudu, Roku, Xumo, Amazon are investing in the market while NBCUniversal LLC and AT&T Inc. (NYSE: T)'s WarnerMedia look for advertising to complement their coming direct-to-consumer products. (See Viacom Bets Big on Free Streaming .)

I don't mean to rain on Tubi's parade, but one has to wonder if this will truly pay off long-term as Tubi tries to expand its audience and content library and taps more deeply into its valuable data to help optimize its advertising.

Traditional TV struggling
Colin Dixon, chief analyst and founder of nScreenMedia is optimistic that Tubi's investment will pay off, and says that's why we're seeing this aggressive land-grab now.

He notes that very little of the $70 billion spent on TV advertising has been transferred to OTT, which is rapidly becoming a home for a coveted demographic group that is watching less and less traditional TV.

Dixon likewise believes that OTT has more in its favor as younger consumers pile in, giving cause for more investment in the free streaming arena.

And there's increasing evidence that the old guard feels the same.

An example showed up today, as FreeWheel, the Comcast-owned ad-tech company, announced it had completed the "first stage" of a unification initiative with corporate cousin NBCU to sell inventory across linear and digital and all screens. (See Comcast's NBCU & FreeWheel Aim to Unify Worlds of Linear TV, Digital Video Ads.)

With respect to digital, NBCU knows it's leaving money on the table as it prepares a new OTT offering that will have a targeted advertising component. "We're just not monetizing as well online as we should," Steve Burke, NBCU's CEO, said last week. (See Can NBCU Crack the Economics of OTT? and Comcast Pushes Past 1.2M Mobile Subscriber Lines.)

And that also means that other OTT players -- subscription or free, ad-based ones like Tubi -- can expect to pay even more for top-flight content as the studios and programmers try to extract the full value of their content.

Like what we have to say? Click here to sign up to our daily newsletter
COMMENTS
Newest First | Oldest First | Threaded View
Add Comment
Be the first to post a comment regarding this story.
EDUCATIONAL RESOURCES
sponsor supplied content
Video Platform Infographic
Direct-to-Consumer Solution Brief
Educational Resources Archive
More Blogs from The Bauminator
Kimberly Maki lends SCTE a helping hand