Verizon: We have more unused network capacity today than five years ago

Verizon this week sought to counter ongoing worries that its wireless network won't be able to support any more customers or traffic.

Specifically, the company released a chart showing the growth of traffic on its network and its efforts to keep pace with that traffic through the application of more spectrum and new wireless technologies like License Assisted Access (LAA) and carrier aggregation. The result, the company said, is that it has slowly but surely gained ground in terms of overall excess network capacity:

Verizon said it has increased the amount of excess network capacity it has.
(Source: Verizon)

Verizon said it has been able to keep pace with increasing traffic on its network in part thanks to new networking technologies like MIMO, 256 QAM, small cells and other LTE technologies.

The result, the company said, is that it can handle four times as much traffic today than it could in 2010 using the same amount of spectrum.

Verizon said it has increased the spectral efficiency of its network.
(Source: Verizon)

The charts from Verizon  despite a lack of specific values  are noteworthy because neither Verizon nor any other major wireless network operator will publicly divulge details of network usage or capacity. Indeed, in its various filings related to its merger with Sprint, T-Mobile heavily redacted information about its own network capacity.

Verizon also offered a chart showing data usage on its network, though it did not provide specific numbers: 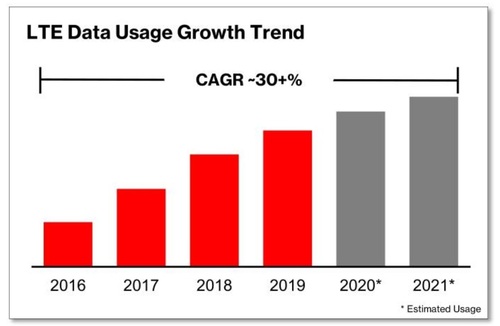 Verion said traffic on its network is increasing.
(Source: Verizon)

The figures provided by Verizon during its annual investor presentation this week are likely intended to blunt concerns among Wall Street analysts that its network won't be able to keep pace with users' demands.

For example, just a few weeks ago analysts at Lightshed Partners reported that Verizon is rapidly running out of spectrum resources in key markets around the US.

"Based on our analysis, Verizon is down to its last 10 MHz of downlink spectrum in 57% of the population of the top 50 markets," the analysts wrote. "And, at their pace of conversions, we believe that should sustain them for about 12-18 months."

Similarly, the analysts at New Street Research warned in 2015 that Verizon would rapidly run out of unused spectrum, a situation that would force it to purchase spectrum from the likes of Dish Network. While that didn't happen, Verizon did purchase mmWave spectrum from XO and Straight Path, which Verizon is now using for 5G.

Leveraging small cells and spectrum
In its presentation with analysts this week, Verizon said it plans to keep pace with data traffic on its network in part by building more small cells. Such devices allow operators to split up macro cell sites into smaller ones, which can then support more customers and more traffic. Verizon said it plans to build five times more small cells in 2020 than it did last year, but it did not apply a firm number to that effort.

Verizon is also widely expected to purchase more spectrum  which is the other main mechanism operators have to handle more network traffic  when the FCC auctions capacity in the C-Band. That spectrum auction is widely expected to happen later this year, and ought to release a massive 280MHz for 5G. However, existing satellite users of the C-Band will need to free up the spectrum before it can be used for 5G, a process that could take a year or more.

All that said, there are indications that Verizon's network will have plenty of additional traffic to handle in the years to come. The analysts at Wall Street research firm Cowen reported that just 53% of Verizon's customers subscribe to its unlimited data plans  meaning that the other half could upgrade to unlimited plans in the future, and increase their network usage as a result. That would undoubtedly add more traffic to Verizon's network.

And that doesn't take into account whatever Internet of Things (IoT) services Verizon adds to its network, which could range from applications like virtual reality to connected automobiles.

But at least one analyst who attended Verizon's investor event this week is confident that Verizon is on track to keep pace with growing network traffic: "We believe the concerns around Verizon's cliffing capacity, spectrum position and fiber plan are overdone," wrote the Wall Street analysts at Wells Fargo in a note to investors following Verizon's event. "In our view in the 5G national coverage world  Verizon has the tools in the toolbox to be toe to toe with its competitors."