Mapping out edge computing: How dense is it?

Edge computing has been a hot topic among cloud computing companies and telecom providers for several years now. Tech startups and behemoths alike argue edge computing could create the foundation for a slew of snappy, new digital services, ranging from autonomous vehicles to real-time augmented reality.

However, a quick check of the publicly available mapping information from some of the biggest providers in the space  listed below  indicates there aren't very many edge computing sites in the US, at least so far. Most providers tout a few dozen edge computing locations around the country  at the most  and those sites are often located in large cities with big populations. Sparsely populated states like Wyoming or Vermont so far don't appear to have much in the way of edge computing infrastructure.

This information, of course, carries plenty of caveats. First and foremost, it only counts the edge computing sites that are publicly advertised. Private edge computing sites  such as those operated by a manufacturing facility or hospital  are likely not included in such data. Further, the below maps are collected from a select handful of representative players  such as startups like Vapor IO, telecom operators like Verizon and cloud computing providers like Google  and are certainly not comprehensive. Finally, the space remains in flux with new sites launching seemingly every week. The situation might be very different a year from now.

Edge computing expectations in the communications industry remain high. "Edge products and services are powering the next wave of digital transformation," boasted IDC researcher Dave McCarthy in a recent release. The firm recently forecast that the worldwide edge computing market will reach $250 billion in 2024 thanks to a compound annual growth rate (CAGR) of 12.5%.

Edge computing, after all, promises to remove delays from digital services by physically locating computing infrastructure closer to users. Doing so eliminates the lag  or latency  involved in communicating with a networked computer. That's critical for services like streaming virtual reality, cloud gaming and autonomous drones, where milliseconds matter.

For companies in the telecom and computing sector, edge computing represents a paradigm shift from today's Internet architecture, which primarily revolves around transmitting users' requests to massive data centers that might be hundreds or thousands of miles away from their geographic location. Thus, a widely deployed edge computing architecture could mean the establishment of hundreds or thousands of tiny computing facilities all over the globe. And the locations of such sites would be important to developers building widescale, low-latency commercial services.

But the edge computing maps available from companies ranging from Amazon to Verizon to EdgeConneX indicate relatively sparse deployments of such facilities, so far.

A look at the maps

Of the publicly available edge computing maps, Google appears to operate the most dense network. The company listed dozens of "edge nodes" in the US on its website. 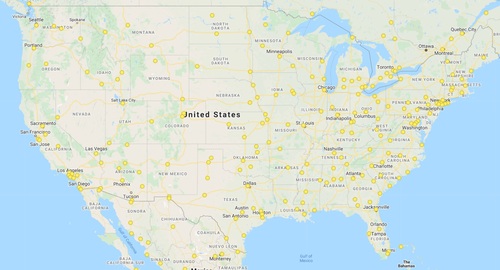 Click here for a larger version of this image.
(Source: Google)

"Our edge nodes represent the tier of Google's infrastructure closest to our users. With our edge nodes, network operators and Internet service providers deploy Google-supplied servers inside their network," the company explained. "Static content that's very popular with the local host's user base, including YouTube and Google Play, is temporarily cached on edge nodes. Google's traffic management systems direct user requests to an edge node that provides the best experience."

Microsoft  which is directly competing against Google in the cloud computing space  offers just a handful of edge sites around the country, according to its website. The company's publicly available map also is difficult to navigate and does not provide very specific location information.

Click here for a larger version of this image.
(Source: Microsoft)

Click here for a larger version of this image.
(Source: AWS) 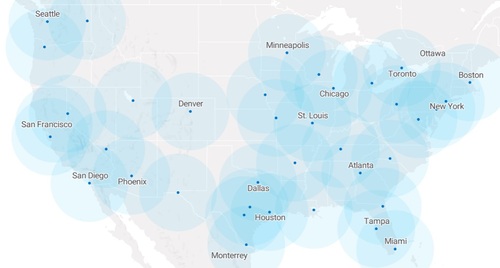 Click here for a larger version of this image.
(Source: Lumen)

Presumably, this map would also dovetail with T-Mobile's edge computing offerings considering the recent partnership between the two companies in the area. 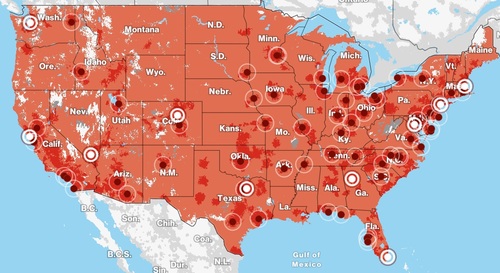 Click here for a larger version of this image.
(Source: Verizon)

Verizon, which is offering its sites through AWS, has promised to light up another ten locations by the end of this year.

AT&T has announced edge computing partnerships with Google and Microsoft, and has said it plans to start a rollout in Chicago this year. However, the company said it does not yet have a map of its offerings.

EdgeConneX  an early mover in the edge computing market  counts more than a dozen sites around the country on its website. 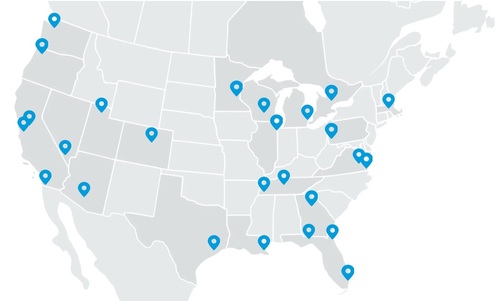 Click here for a larger version of this image.
(Source: EdgeConneX)

Startup Vapor IO has plans to launch up to 36 edge computing markets around the country; today it has around half a dozen active edge markets.

Click here for a larger version of this image.
(Source: Vapor IO)

Finally, it's worth noting that there may not be much demand for large numbers of additional public edge computing sites, at least according to the financial analysts at MoffettNathanson.

"We don't doubt that edge computing is a real trend," the MoffettNathanson analysts wrote in a recent report to investors. "Instead, our suspicion is that most edge computing needs can likely be met with regional deployments in locations like traditional data centers rather than deployments at the base of a cell tower."

The MoffettNathanson analysts wrote that fiber networks can theoretically transmit data 125 miles per millisecond. And though they cautioned that such figures can be subject to a variety of caveats, it nonetheless indicates most snappy, low-latency services can be powered by a relatively modest number of sites around the US.

"These dynamics suggest that most edge deployment needs can likely be satisfied with regional deployments in traditional data centers rather than deployments at the base of cell towers or other locations," they argued.