LONDON – The Edge Event – Cellnex has achieved fame and notoriety as Europe's most acquisitive "towerco."

In a few short years, the Spanish infrastructure company has amassed a portfolio of about 137,000 towers across the region, buying them from debt-ridden operators and then renting them out to their former owners.

An emerging industry concern is whether Cellnex has grown too powerful – the UK's BT last year complained that an acquisition of towers owned by Three, a mobile rival, risked turning Cellnex into a dominant player.

That has not quelled Cellnex's appetite or ambitions. Having become landlord to many of Europe's telecom brands, it now believes it can sate their needs in edge computing as well.

Operators have traditionally hosted most of their IT resources and core network functions at a few big data centers. But distributing these around the network, using a larger number of smaller facilities, would improve services, support the rollout of new applications and reduce operating costs, they hope.

Cellnex wants to be an independent provider of the infrastructure for these edge deployments.

"What we are thinking is that it is another part of the infrastructure, and we see value in driving it as a neutral host proposition," said Eduardo Fichmann, Cellnex's chief strategy officer, at Informa's edge event in London this week.

As with the towerco model, any operator could pitch up and rent space in one of Cellnex's edge facilities. The regional towerco would effectively be an "edgeco," too. 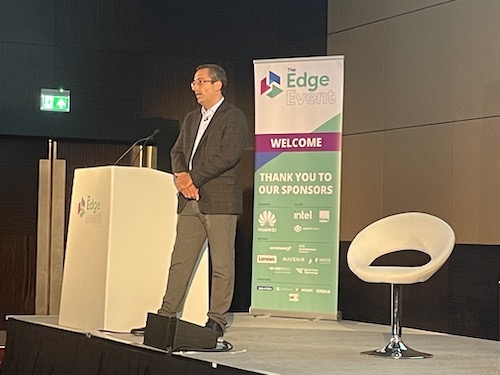 Cellnex's Eduardo Fichmann aims to make his company a neutral host for the edge.
(Photo by Iain Morris)

Operators happy to lease towers could see plenty of attractions in these edge arrangements. As Fichmann observes, capital intensity remains high at companies building out 5G and fiber networks (for BT, it has hit 25%), while service revenues are not showing much improvement.

Figuring out where to put edge facilities and making the necessary investment could be another costly distraction for consumer-facing brands. Sharing edge infrastructure with other operators sounds economically sensible.

Cellnex is no stranger to the edge market, either. Since 2018, it has been collaborating with Bouygues, a French operator, on the deployment of edge computing at about 100 locations in France.

The Bouygues plan is to run some of its radio access network functions at these facilities, according to Fichmann. Around 40 of them are up and running today, he told attendees at the Informa event.

"We have space available for us to help other customers leverage those locations," he said.

"It could be other MNOs [mobile network operators] as well as private networks or moving clouds to the edge."

What's currently unclear is whether Cellnex owns much Europe-wide infrastructure suitable for edge deployments. It makes only cursory references to edge computing in recent financial statements and there was no discussion of it during the company's last earnings update with analysts.

Acquisitions have already saddled Cellnex with about 16.2 billion ($16.8 billion) in net debt, roughly 8.4 times what it made in adjusted earnings (before interest, tax, depreciation and amortization) last year.

Fichmann points to a relevant takeover of Edzcom, a Finnish "edge connectivity" specialist, back in July 2020.

"We are arguably the most successful private networks operator in Europe through that," he said. Yet Edzcom employed just 17 people at the time of the deal and is unlikely to have brought much additional infrastructure for Cellnex.

While operators in the US and some other countries have been willing to sell data centers, many would probably balk at the divestment of central offices and other facilities where they store electronic equipment.

Worried about losing control of important strategic assets, some are resistant to the sale of majority stakes in their towers. It is hard to imagine they would attach less strategic importance to potential edge sites.

Cellnex today partners with Intel, a chipmaker, and Wind River, the provider of a cloud-computing platform, on several edge pilots. But Fichmann's commentary about non-MNO customers raises the prospect of a future edge tie-up with AWS or another public cloud.

Sales at Cellnex soared 64% year-over-year in the recent first quarter, to 828 million ($860 million), while earnings were up 66%, to 634 million ($658 million). The company has previously dismissed concerns about leverage, pointing out last year that existing contracts then covered all debts even without any renewals.

The share price has dropped sharply so far this year, falling 29% in Madrid. Yet infrastructure investors are still drawn to Cellnex and its ilk as a reliable and long-term source of returns.

Fichmann cites forecasts showing that around 30% of computing workloads will be run from the edge by 2025, up from just 1% in 2019. Success for Cellnex will hinge partly on how accurate those forecasts turn out to be – and whether edgecos can profit as much as towercos have already done.