Comment (22)
For the past couple of weeks, I've been testing Vodafone's new 5G network in London. My aim was to see how it compares to 4G service -- I'm a long-time Vodafone subscriber -- and to get a feel for the experience end-users can expect from 5G as coverage is deployed more widely and densely. A secondary aim was to learn what Vodafone's deployment can tell us about mid-band 5G.

As with its mid-band peers in UK, and the rest of the world, most of the operator's 5G sites are deployed on the pre-existing LTE grid. Nearly all the sites I came across were rooftop deployments. In London, as far as I know, the majority of Vodafone's 5G sites use 64T64R massive MIMO antenna from Ericsson (which also supplies Vodafone's LTE RAN in London).

So, what is the service like to use? And what kind of data rates does the network deliver in the downlink?

In short, where you have 5G signal, the service is good, and occasionally excellent.

After a bit of searching, I achieved my fastest ever speed on a UK 5G network at 770Mbit/s downlink. This was recorded across the street from a Vodafone office building, with rooftop mast, where I'm told some of the UK network team spend their days. In other words, this is the performance you get in more or less ideal conditions at a flagship site.

For evidence, here are the screenshots from the Fast speed test app and the site and device location as shown by the CellMapper app: 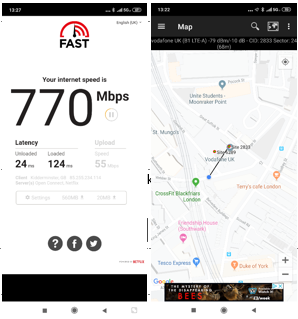 And for context, here are a couple of photos of the site itself taken from the test location: 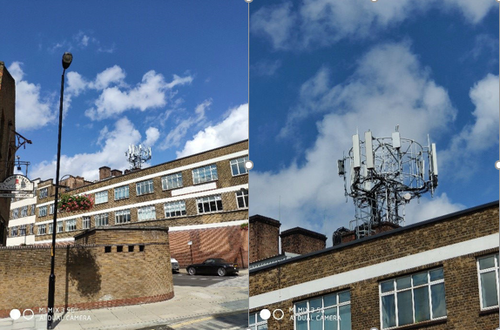 Much more often downlink speeds are in the 300-400Mbit/s range where there is good 5G signal. And most often the Vodafone network delivered between 100-200 Mbit/s downlink when the phone was showing a 5G icon (i.e. outdoors at street level in non-line-of-sight conditions).

One of the challenges Vodafone has in differentiating 5G in London is that it has an excellent LTE network. At my desk at my home office in London (Zone 2), for example, I get comfortably get >150 Mbit/s downlink on LTE, and speeds in the region of 100 Mbit/s are becoming commonplace across the city, if not yet ubiquitous.

Vodafone's 5G coverage is, I'm afraid to say, pretty poor around London. Spending a few days visiting some of the busiest areas of London with guests from out of town, without making a special effort I struggled to get more than a fleeting connection to 5G. This is, I think, because not many sites are deployed (Vodafone UK isn't giving any 5G site numbers, at all) and partly because 3.5GHz doesn't propagate as well as the lower bands used for LTE (even using massive MIMO). I also suspect it's partly due to the way Vodafone has configured the network to allow the phone to only show the 5G icon when you actually have a decent 5G signal.

However, where Vodafone has deployed coverage, it has done a really good job. Rather than install 5G in "pepper pot" fashion at its busiest sites, it instead appears to have deployed 5G in site clusters that give you more or less contiguous service across the coverage area -- i.e. without dropping back to LTE too often. As a user, I like this approach. And as a reviewer and analyst I like it because it starts to hint at what it will be like to have 5G everywhere. 5G is good, we just need lots more of it.

A couple of notes on the review: I tested the network using a Xiaomi MIX 5G phone provided free of charge by Vodafone analyst relations for a short review period. Vodafone placed no restrictions on use of the service or on what I could report. The company did provide a list of locations where I could be sure to find 5G, which came in handy. The Xiaomi MIX 5G device itself is pretty good, although a little hampered, in my eyes, by the Xiaomi Android skin. There's nothing wrong with it per se -- and it actually has a few touches I quite like -- but I'm a pure Android kind of customer.

Speaking of customers, it is also worth noting that Vodafone introduced unlimited data plans when it launched 5G. This is a big shift for "premium" UK mobile brand and has already sparked a response from competitors. The top-end package of unlimited data, with no speed limits, is available for £30 ($36) per month SIM-only. If you're a heavy user, that's a great deal on a very good network.

thelover 3/26/2020 | 1:44:19 AM
Re: The Custom Boxes Print The and programs that are aired on Pinoy TV make you proud to be a part of Philippines culture. People also love to watch all Pinoy teleserye of
Reply | Post Message | MESSAGES LIST | START A BOARD

bhaiterabhai 2/20/2020 | 2:58:15 PM
vodafone 5G Two networks offer the fastest speed and best coverage. We tested 5G on EE, Vodafone and O2 in five major cities across the UK. 5G launched in the UK last year and now, at the start of 2020, all four major UK networks -- EE, Vodafone, O2 and Three -- offer it but to vastly different extents

milliedavid 2/7/2020 | 9:32:07 AM
custom cbd packaging Our Custom cbd packaging boxes are manufactured from durable, high-quality materials and available in a wide variety of designs and colors, so you can choose the one according to your requirement. Apart from the customization, we also offer these boxes in matte, glossy, and UV coating to further attract more sales.

john rick 2/1/2020 | 7:38:37 AM
great great website it helped me alot in writing blogs for my website that i made using
<a href="https://www.thehostingstop.com/">HostGator WordPress hosting plans</a> this has hosting plans and offers
Reply | Post Message | MESSAGES LIST | START A BOARD

Thinking about how to download Hotstar for PC? We have shared a simple strategy to download hotstar on your PC or PC. Utilizing this stunt shared underneath, you can download for Windows 10, 8.1, 8 or 7

Downloading Hotstar is accessible for both PC and Workstation. You can introduce hotstar work area programming on the two Windows and Macintosh Working Framework.

Thanks for the great post. Keep it up like this. So many people will find this helpful information.

Gigarettes is the best place to buy west cigarettes. Get genuine duty free cigarettes with free express shipping for ANY order!