ANTWERP, Belgium -- ONS Europe 2019 -- The work already done by the Open RAN (O-RAN) Alliance is exciting a lot of major network operators, but the realization of quite what is involved in planning, deploying and running multivendor mobile networks appears to be hitting home.

That's my takeaway from a keynote speech here in Antwerp -- the "home" of Belgian chocolate -- given by Olivier Simon, director of Radio Innovation at Orange Labs Networks.

Simon laid out the progress made by the O-RAN Alliance since it was first formed last year by five founding carrier members -- AT&T, China Mobile, Deutsche Telekom and NTT Docomo, as well as Orange. The basic proposition is that, without the flexibility and cloud-oriented openness that O-RAN architectures can enable, delivering on the full promise of 5G is a non-starter.

Lots of companies agree: The O-RAN Alliance now has 21 operator members and more than 80 vendor contributors, he noted. And the work put in by the Alliance is now coming to fruition as NTT Docomo moves towards a commercial deployment of technology based on O-RAN specs for 4G and 5G deployments.

But while being able to take a best-of-breed approach to disaggregated mobile network construction brings a number of benefits to the operators (including the slaying of the vendor lock-in beast), it also unearths a host of management, test and integration challenges that are not evident when a single vendor solution is deployed. Recognizing this, the O-RAN Alliance teamed up with the Linux Foundation earlier this year to form the O-RAN Software Community to address such issues.

And it's in this area of test and integration where disaggregation and open interfaces make things much trickier, and where the operators and their partners need to pool their efforts and resources, says the Orange man. "We need the right methodology it's a massive challenge," stated Simon. "The success of failure of an Open-RAN concept depends on operators' capacity to find a good test and integration model," he added. 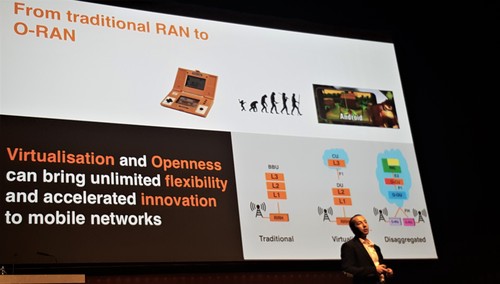 Olivier Simon, director of Radio Innovation at Orange Labs Networks, was not the first nor last at the ONS Europe event to call for industry collaboration to address the test and integration challenges associated with emerging, disaggregated and more cloud-like telco architectures.

There are two potential routes to addressing the challenge, he noted: Everyone goes their own way and pours time, effort and money into a significant test and integration program involving multiple hardware and software suppliers; or the O-RAN community gets together to develop a multi-operator integration program, "where a large part of the test and integration can be done" that is common to all operators. Simon estimated that 80% of the work would be common and only 20% of the process would then need to be handled by each operator to suit their particular architectures and systems.

On paper, of course, that makes sense. But is it just wishful thinking? Is anything actually happening?

On the conference sidelines, the Orange man says that talks about exactly how this multi-operator effort could be implemented -- who would create the test plan, do the testing, whether it should be done on a regional basis and so on -- have been underway for a few months and are still ongoing.

In the meantime, however, Simon notes that China Mobile has initiated activity by helping to form the Open Test and Integration Center (OTIC) initiative, along with China Telecom, China Unicom, Indian operator Reliance Jio and a number of vendors including Intel, Mavenir and Samsung.

In a statement issued last week, China Mobile noted that the "OTIC initiative is an operator-led collaboration with the aim to facilitate OEM and other open source products and solutions to be functionally compliant to the specifications of the O-RAN Alliance, through verification, integration and testing of disaggregated RAN components and to deliver the desired architecture that supports a plug-n-play model."

China Mobile says it will "initiate an OTIC in Beijing, China, which should provide the common platform for solutions to be operationally ready to enable end-to-end interoperability and deployment in scale; as well as to be hardened for reliability, performance, scalability, and security that operator networks require."

Reliance Jio is also "creating" an OTIC, though no further details have been shared.

So a start has been made -- no doubt DoCoMo will share its experiences with its O-RAN partners and help to fine-tune some of the test and integration processes and plans that all operators with multi-vendor nirvana in mind will need.