Congress likely to cough up more 'rip and replace' money

According to the financial analysts at New Street Research, Congress will probably approve more money for the FCC's "rip and replace" program designed to pay smaller US network operators to replace equipment from Chinese suppliers Huawei and ZTE with equipment deemed secure.

"One piece of communications-related legislation that we think is likely to pass this fall is funding to address the $3.7 billion shortfall in current appropriations to fund rural telcos replacing their Chinese-built networks with equipment made by Western enterprises," wrote the New Street analysts in a recent note to investors. "Known as the 'rip and replace' appropriation, we see little opposition to passage; the remaining questions instead concern what legislative mechanism will enable the new funding, with an Appropriations Continuing Resolution being the most likely."

Indeed, smaller network operators have been clamoring for Congress to fully fund the "rip and replace" program for months now. The FCC initially asked Congress for around $1.9 billion to fund the effort. However, after the agency conducted a detailed review of all the applications for money from the program, it discovered that its initial request was short by $3.7 billion.

Now, the FCC and the companies hoping to participate in the program have gone back to Congress to address the shortfall.

"It is now up to Congress to immediately provide the balance of funds needed so that this program can succeed. If Congress delays in doing so, simply put, we cannot continue to provide the services at levels that Alabamians deserve and we will see further service degradations and outages and maybe even a complete shutdown of service in some areas  areas where often no other option exists," warned Pine Belt Communications in a recent LinkedIn post. The company is asking the FCC for $75 million in "rip and replace" money. 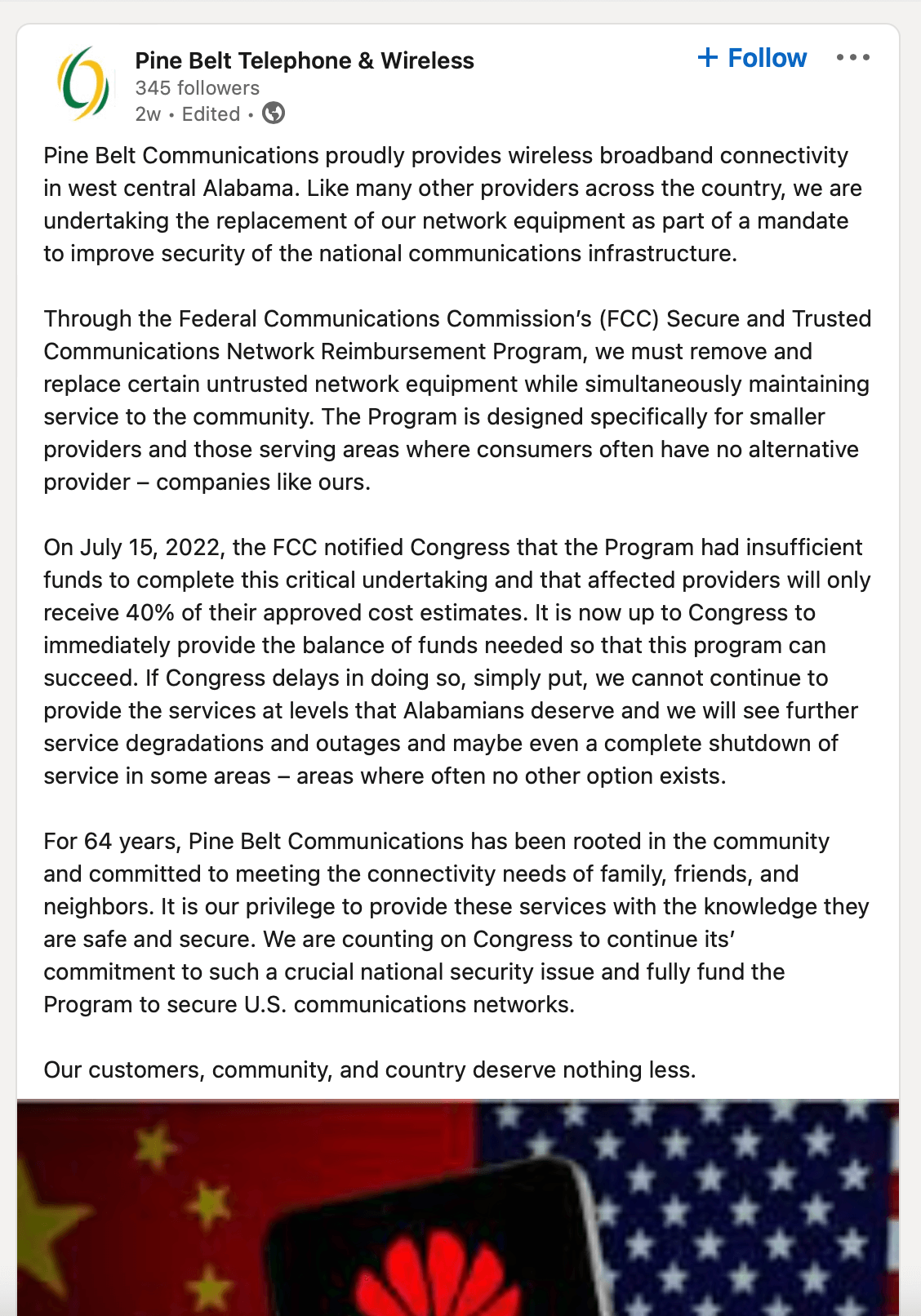 A screen capture of a Pine Belt Communications LinkedIn post.

"For 64 years, Pine Belt Communications has been rooted in the community and committed to meeting the connectivity needs of family, friends, and neighbors," the company wrote. "It is our privilege to provide these services with the knowledge they are safe and secure. We are counting on Congress to continue its commitment to such a crucial national security issue and fully fund the Program to secure US communications networks."

Indeed, recent reports from CNN and Reuters have outlined some of the security concerns. For example, CNN cites unnamed sources who said Chinese spies could hack into high-definition surveillance cameras located atop cell towers used by Viaero Wireless. Those cameras, located along stretches of Interstate 25 in Colorado and Montana, could potentially provide information on the military traffic to and from nuclear missile silos in the area. Roughly 1,000 Viaero cell towers host Huawei equipment.

In a recent filing with the FCC, PTA-FLA sought to reiterate such concerns. "There are numerous military bases and installations in PTA-FLA's service area including Ft. Jackson, Mcentire Air Base, and Shaw Air Base in and around Columbia, South Carolina; and Milan Army Munition Plant outside of Jackson, Tennessee," the company wrote to the FCC.

In its filing, PTA-FLA even published a map of its coverage area showing nearby military bases. The company is asking for $274 million from the "rip and replace" program.

If Congress does allocate another $3.7 billion for the program, much of that money will likely be spent with companies like Nokia and Ericsson that are selling their equipment as secure replacements for Huawei and ZTE gear.