According to the latest findings from Speedtest provider Ookla, speeds on SpaceX's Starlink satellite network slowed again in Q3 across the US.

Ookla's findings are noteworthy, given that sluggish speed is one reason the FCC cited in its decision to withdraw almost $1 billion in government subsidies from Starlink.

"We cannot afford to subsidize ventures that are not delivering the promised speeds or are not likely to meet program requirements," FCC Chairwoman Jessica Rosenworcel said earlier this year, adding that Starlink customers must also fork over $600 for a receiver for the service.

Starlink had applied for $886 million in federal funding through the FCC's Rural Digital Opportunity Fund (RDOF), but the agency rejected that application in August. Starlink has appealed the decision.

The satellite provider's appeal may struggle after Ookla's latest report, which found that Starlink's download speeds dropped 14% in Canada and 17% in the US from the second to the third quarter of 2022. Ookla noted that during the same period, speeds offered by fixed Internet service providers rose 8% in the US and Canada.

In the US, Starlink's service averaged 53 Mbit/s downloads, 7.2 Mbit/s uploads and latency of 67 ms. 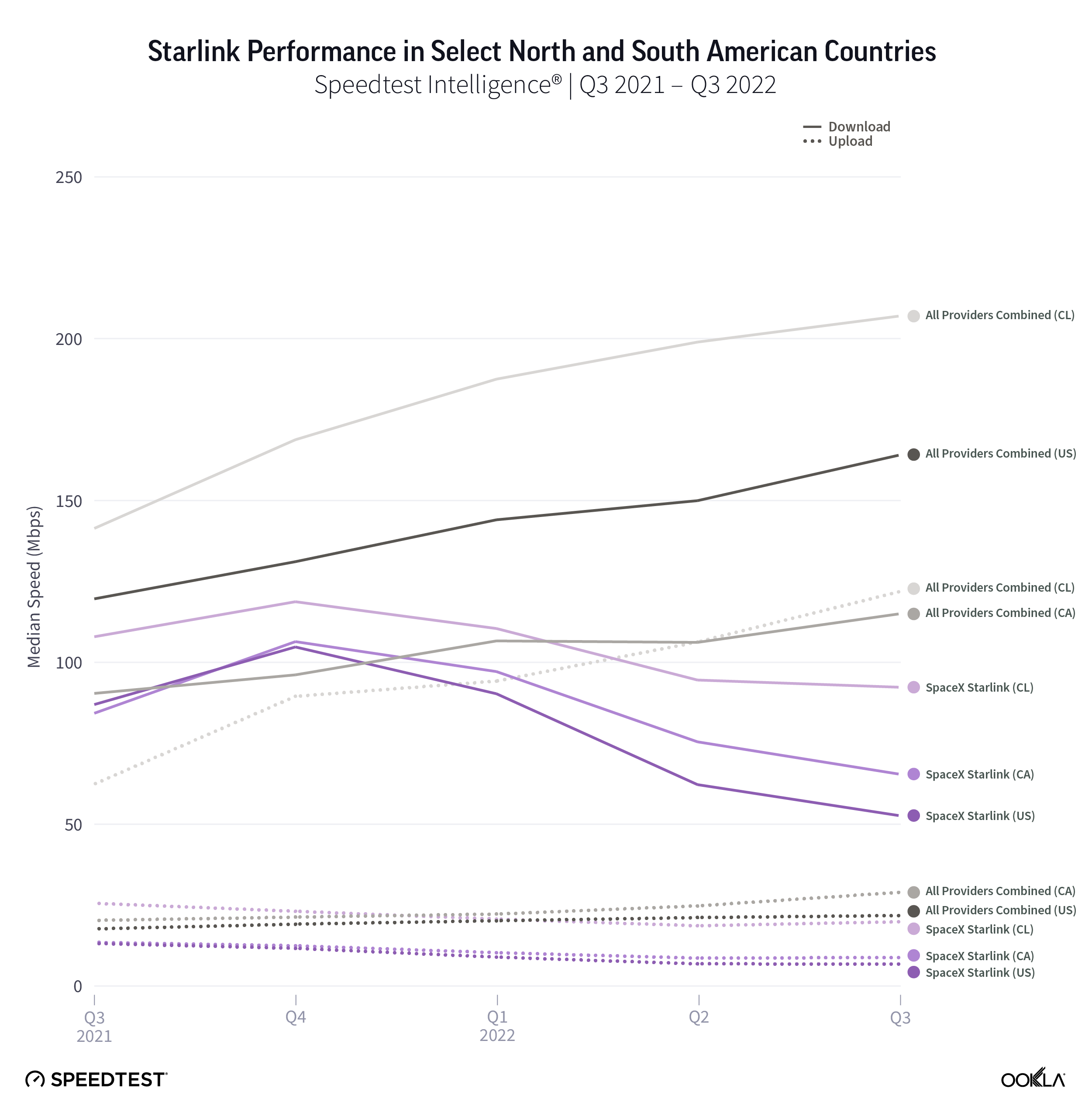 Starlink speeds have been slowing since Q4 2021, according to Ookla. Click here for a larger version of this image.
(Source: Ookla)

"Perhaps a victim of their own success," wrote Ookla's Josh Fomon in a post on the company's website, noting that Starlink has dramatically expanded its service area and customer base over the past year.

Starlink now counts around 400,000 customers and expanded services to six new countries during the third quarter. In the US, the company now counts at least 10 unique users in 75% of all US counties, up from 25% a year ago.

Analysts have warned for years that Starlink's network has limited capacity and that the addition of more customers could drag down speeds across the shared resource.

Likely as a result, Starlink has started putting limits on usage. For example, last month, it warned users who consumed more than 1TB of data per month that their speeds would be slowed. The company is also hiking prices for customers in Ukraine, where its services have emerged as key to communication in the war with Russia.

Those second-gen satellites promise to offer services to existing mobile phones via a new deal between T-Mobile and Starlink. However, the company faces significant obstacles in launching them, including getting regulatory approval and operating the rockets necessary to launch bigger satellites.