Both Verizon and AT&T have in recent days taken a step back from their aggressive smartphone promotions. The moves come as Charter Communications and Comcast  two of the nation's biggest cable companies  get more belligerent in the mobile industry.

Overall, the situation has led some analysts to begin warning of a major clash between the wireless and cable industries.

Other analysts argued the pricing actions by AT&T and Verizon ought to please investors in both companies. That's because extremely aggressive promotions can cut into the companies' profits, and a withdrawal from such promotions "should ease investor fears about the intensity of competition," according to the financial analysts at New Street Research.

Undoubtedly the topic will be discussed later this week during AT&T and Verizon's respective quarterly conference calls. MarketWatch, citing data from the financial analysts at Cowen, reported that both operators are expected to report "outsized" growth in new customers.

Although both Verizon and AT&T pulled back slightly from their smartphone promotions in recent days, each did so in its own way.

For Verizon, the company essentially stopped offering its most aggressive smartphone promotion to its existing customers, but continues to offer it to new customers. The action is likely designed to shore up Verizon's financials while maintaining a competitive position against its rivals. Although the details of Verizon's latest promotional offer are complex, the company continues to offer up to $1,000 in phone discounts to new customers who trade in expensive phones, but just $440 to existing customers looking to upgrade their current phone. Previously the company offered $1,000 to both groups of customers.

A company representative told Light Reading that the tweak represents Verizon's intention to update its promotions "as we often do." And Wave7's Moore explained that Verizon will likely toggle its promotions on and off "on a tactical basis."

For AT&T, the operator essentially reduced the amount of its smartphone discount from $1,000 to $800  though again the details are complex  but AT&T continues to offer that promotion to both new and existing customers. "Currently, new and existing AT&T customers can get $800 off any new iPhone 13 [with a smartphone trade-in]. Making both the iPhone 13 or iPhone 13 mini $0 with eligible trade-in on an unlimited plan," an AT&T representative explained in a statement to Light Reading. "The $1,000 off promotion was for a limited time only."

T-Mobile, for its part, so far does not appear to have changed its own promotional posturing.

The softening stance by AT&T and Verizon can be contrasted against Comcast and Charter, which now both offer extremely aggressive pricing for both individuals and families. Indeed, Charter's new family pricing plans are among the cheapest in the entire wireless industry, according to analysts.

That's noteworthy considering the mobile services from both Comcast and Charter piggyback on Verizon's mobile network.

Interestingly, according to new survey data from the financial analysts at Morgan Stanley, cable companies appear well positioned to further gain share. The firm said it conducted a survey of 3,500 US telecom customers and discovered that Comcast's Xfinity Mobile customers report the highest levels of satisfaction  97%  of any mobile provider, including those of AT&T and Verizon. Charter's Spectrum Mobile came in second, tied with AT&T, with a score of 90%. 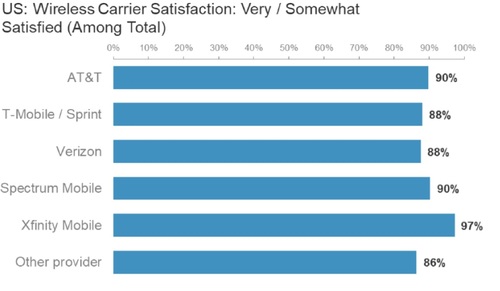 Further, according to the results of Morgan Stanley's survey, the cost of mobile service continued to be the leading reason why wireless customers switch providers. 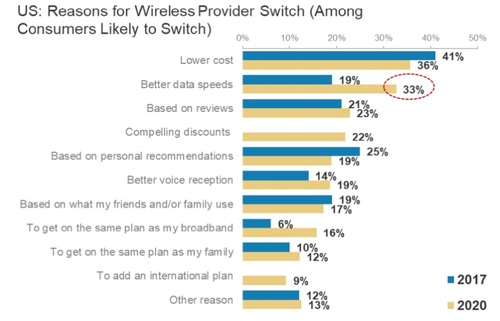