Although operators have employed dramatically different strategies when it comes to 5G, a new report from network-monitoring company OpenSignal shows that Verizon, AT&T and T-Mobile are all offering roughly the same overall 5G speeds in several major US cities.

"The 5G market is now very competitive," wrote OpenSignal's Ian Fogg in a new post on the company's website. "In three cities, there is no clear leader in 5G download speed because the average 5G speeds are close enough that our confidence intervals overlap. These results are in marked contrast to our previous results." 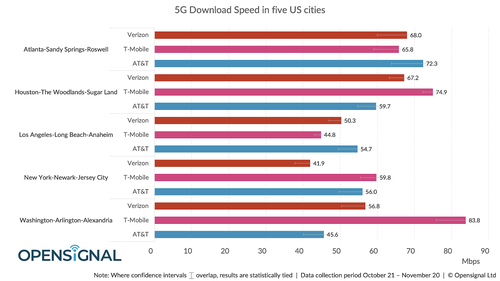 OpenSignal tracked 5G download speeds across Verizon, AT&T and T-Mobile in five major US cities. Click here for a larger version of this image.
(Source: OpenSignal)

Another finding by the network-monitoring firm: 5G connections are providing significant speed boosts over 4G connections. That's noteworthy considering operators and smartphone vendors are loudly touting the benefits of 5G in order to get customers to buy new 5G phones and pay for 5G services. 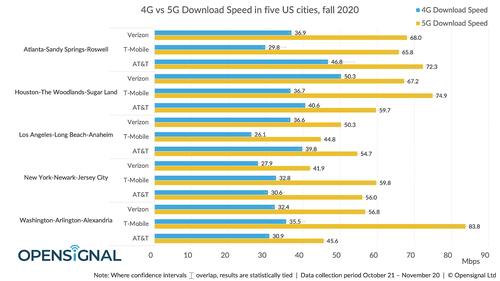 OpenSignal highlighted the difference between overall 5G and 4G speeds in the cities. Click here for a larger version of this image.
(Source: OpenSignal)

OpenSignal's findings are particularly interesting given the decidedly different routes each of the nation's top operators traveled over the past few years to reach 5G parity with each other today. Verizon, for its part, initially embraced a highband, millimeter wave (mmWave) spectrum strategy for 5G that saw the company light up blazing-fast speeds in a few downtown areas. T-Mobile, meanwhile, took the opposite approach by first lighting up 5G on its lowband 600MHz spectrum, bringing 5G signals to vast swathes of the country, albeit at speeds roughly equal to 4G. AT&T has taken a middle path by leveraging elements of both Verizon's and T-Mobile's 5G strategies.

Now, however, all of the operators are offering 5G across somewhat similar spectrum holdings. Verizon launched 5G nationwide via Dynamic Spectrum Sharing (DSS) technology, which pulled down its average 5G speeds by putting the technology on its lowband spectrum. T-Mobile, meantime, has been speeding up its 5G network with the addition of midband 2.5GHz spectrum it acquired from Sprint.

"As US carriers build on their initial 5G launches, the 5G experience will improve, especially as new 5G spectrum becomes available in the US that allows carriers here to emulate the 5G experience in other countries where similar 5G spectrum has already been deployed," Fogg argued, pointing to the FCC's recent CBRS midband spectrum auction. The agency is scheduled to begin a more expansive C-band midband spectrum auction next week.

Those auctions, alongside operators' various 5G buildout efforts, could significantly change OpenSignal's 5G speed rankings in the future. Most analysts expect T-Mobile to take a commanding lead in 5G in the coming months and years as it moves through its five-year, $60 billion 5G network buildout.

But there's one more factor to note in relation to OpenSignal's findings, and that involves the complexities around 5G technology that may not be captured by app-based testing and monitoring services like those powered by OpenSignal.

"Testing DSS isn't straight forward," analysts at Signals Research Group (SRG) wrote in a recent report on Verizon's DSS technology that used professional network testing equipment from Accuver Americas, Rohde & Schwarz and Spirent Communications. "It is also imperative that the analysis of the data focuses exclusively on the radio channel supporting DSS, plus perhaps the LTE channel serving as the anchor band. Analyzing performance at the application layer, such as with an app-based throughput measurement tool, inherently results in the inclusion of data throughput from all LTE frequency bands used by the smartphone. As we document in this report, in the best of circumstances lowband 5G NR throughput still only accounts for a small percentage of the total user throughput."

Added the SRG analytics: "This situation won't stop consumers from seeing the 5G icon, witnessing the high data speeds, and attributing everything to 5G."

As SRG has demonstrated in other reports, operators' 5G services don't rely exclusively on 5G connections. Instead, many 5G connections in the US actually transmit most data through a 4G LTE connection. The result is that customers see a 5G icon on their phone, leaving them to assume that the faster speeds they're getting are solely due to 5G, when in reality they're receiving faster speeds due to a complex set of technologies that use both 5G and 4G.

But that won't matter to most consumers, or most simplistic speed tests. As the SRG analysts put it: "No harm, no foul."