The myriad reasons some people don't have broadband

A common refrain among US telecom executives involves the pandemic and how it highlighted the necessity of a broadband Internet connection.

Indeed, it's that notion that's today creating bipartisan support for historic amounts of government spending into expanding broadband in America. Vice President Kamala Harris, who is spearheading the President's broadband efforts, has said the administration's goal is to bring the Internet "to every American household."

But new findings from the Pew Research Center highlight some of the surprising factors driving the digital divide into 2021. (See Broadband Bites: White House frees $1B for broadband on tribal land.)

The findings are important because the Pew Research Center has been studying the issue for years, and its survey results are widely valued. The organization said it conducted telephone interviews on the topic between January and February of this year  during the darkest days of the pandemic in the US  among a national sample of 1,502 adults. Among the very specific details provided by the organization about its methodology, 300 respondents were interviewed on a landline telephone and 1,202 were interviewed on a cellphone, including 845 who had no landline telephone. (Companies touting hopelessly vague survey data on 5G, often based on no quantifiable parameters, may want to take note.)

Overall, the Pew Research Center reported that 85% of respondents said they owned a smartphone, while 77% said they had a home broadband connection. That's up from 81% and 73%, respectively, in 2019.

Other reasons respondents cited for their lack of home broadband included the fact they can get it outside their home or that their smartphone supports all their online needs. Twenty-five percent of those without home broadband blamed the situation on the fact that it's not available where they live or not available at an acceptable speed. 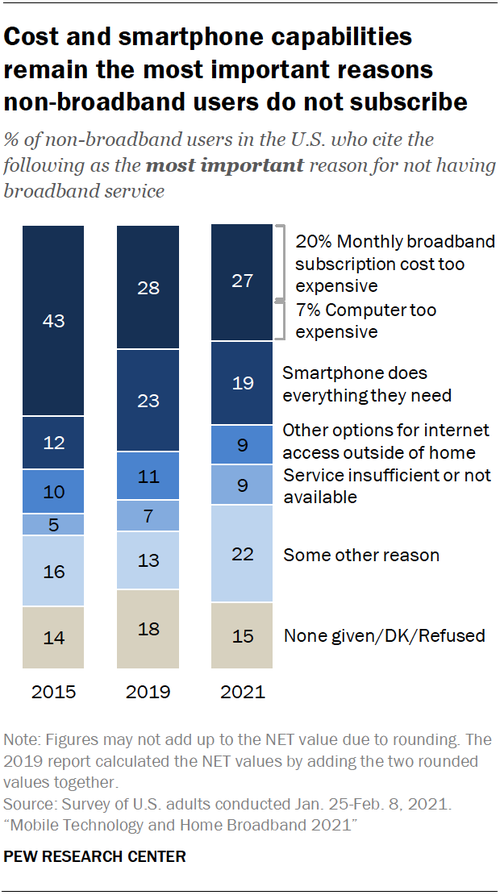 The organization found that seven in ten users without home broadband reported they would not be interested in having broadband at home in the future. Another 25% think a home broadband subscription "is something that interests them." The firm said that figure hasn't changed much since its 2019 survey.

White Paper: How to Address Post-Quantum Security Threats
White Paper: Optimize your Network for IP with Converged SDN Transport Architecture
Network Modernization: Heavy Reading White Paper & Case Study: The Most Promising TDM to IP Solution for Network Modernization Today
Take Your Network to the Next Level with Single-Lambda 100G Pluggable Optics
What are breakouts and how do you use them?
More Blogs from Broadband World News
Starlink courting airlines for in-flight Internet connectivity deals

SpaceX exec says Starlink's aviation product is in development and talks are now underway with 'several' airlines, moves that are sure to amp up competition with satellite broadband companies such as Viasat.

DOCSIS 4.0 presents a multitude of spectrum options, but operators are already gravitating towards expanding the upstream to 396MHz, which would support upstream speeds of about 3 Gbit/s, CommScope exec says.

The first of three ViaSat-3 satellites, set to provide coverage for the Americas region, has completed key integration and performance testing ahead of an expected launch in 'early' 2022.

Fixed wireless provider Redzone told the FCC it would deploy 50Mbit/s services to the town of Islesboro, Maine. The only problem? The town already operates a 1Gbit/s fiber network.