Federico Guillén appeared to land one of the plum jobs at Nokia during the Finnish vendor's grand overhaul in October. While Tommi Uitto was fighting hard to recapture the mobile territory Nokia had lost, Guillén could feel relatively safe at the top of network infrastructure, a new division encompassing all things fixed, IP and optical.

Already highly regarded for its expertise in all three areas, Nokia also remains the only big alternative to Huawei, a Chinese vendor that is increasingly out of favor in the West. Pandemic-era business is booming, too.

When it published its first-quarter results earlier this year, Nokia owed its overall sales growth largely to Guillén, who previously led customer operations for the EMEA and APAC regions. His unit's revenues were up 22%, to about 1.72 billion (US$2 billion), compared with the year-earlier period. And after clocking a 125 million ($148 million) operating loss in the same quarter of 2020, network infrastructure managed a 105 million ($125 million) profit.

"It is in some sense because of COVID," Guillén tells Light Reading. "This situation of the pandemic, which has been terrible for all of us, has put more value than ever in the telecom sector, and especially the fixed part of the business." 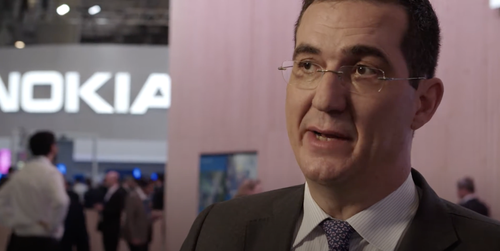 Nokia's Federico Guillén has taken over network infrastructure at an auspicious time.

There have been none of the banana skins that badly upended Nokia's mobile business in 2019, when it was let down by Intel and resorted to costlier chips instead. Partly, that is because it is not as beholden to big broadband chipmakers such as Broadcom, having seized control of semiconductor development with Quillion, an in-house chip that supports several generations of broadband technology.

"We believe that we are several quarters ahead of the competition," says Guillén. "The beauty is in the backward-compatibility  you can start deploying the new line termination cards in the OLTs [optical line terminals] to provide GPON or XGS-PON and then provide 25G PON wherever you need it."

It is in 25G PON that Nokia has arguably made its biggest bet on the future development of fixed broadband. The technology is the latest addition to the point-to-multipoint family, using a single optical fiber to support numerous endpoints. As the label implies, it would support 25 Gbit/s of shared bandwidth, two and a half times more than XGS-PON, today's highest-speed option. But it had controversial beginnings and there is a danger that the wider industry leapfrogs it altogether.

The kerfuffle happened early in 2020, when Huawei and some if its Chinese customers effectively blocked the standardization of 25G PON by the International Telecommunications Union (ITU). They appeared to see it as a threat to their investment in and promotion of 50G PON as the standard that should follow XGS-PON and other 10Gbit/s options. Nokia duly stomped out of the ITU and started its own technology club  now called the 25GS-PON MSA (for multi-source agreement) Group.

Those skeptical of 25G PON include Adtran, a US vendor that counts Deutsche Telekom and BT as major customers in Europe. Ronan Kelly, Adtran's chief technology officer for the EMEA and APAC regions, thinks 25G PON is unlikely to be needed for another decade, and that 50G PON costs will have dropped to a competitive level by the time it is.

"Ten years is a long time to be able to drive cost out of the next PON technology," he previously told Light Reading. "If the market that consumes the bulk of the PON transceivers has already decided it's doing 50G PON, I expect by the time it is needed it will prove to be the most cost-effective option."

Nokia is clearly banking on the opposite  that a market for 25Gbit/s broadband technology will have taken shape while 50G PON remains too expensive. "We firmly believe that 25G PON is going to be there for as long as needed until the lasers of 50G and 100G are economically feasible, and that is going to take time," says Guillén.

"In a country with some scarcity of fiber, a much better use of the fiber is a point-to-multipoint architecture than point-to-point," says Guillén. "It is going to be much simpler, and we are working to be able to support a ramp-up with 25G PON solutions. I am convinced that this is going to be one interesting scenario for operators."

The other advantage, from Nokia's perspective, is that 25G PON can be deployed on the same hardware  thanks to Quillion  as GPON and XGS-PON. Operators would not have to install anything new, paying Nokia only for a software upgrade. "It is a very easy evolution path from 10G," says Stefaan Vanhastel, the chief technology officer of Nokia's fixed-line business. A shift to 50G PON from XGS-PON would require the installation of new equipment.

Of course, Nokia's executives insist their current focus on 25G PON does not mean they are in any way neglecting 50G PON or even what comes next. "We are always investing in 50G and 100G and we just issued a press release with Vodafone after demonstrating 100G PON," says Guillén.

Still, if Adtran's Kelly is right, and XGS-PON proves sufficient until 50G PON is competitive, then much of the investment in 25G PON would look wasted. Another possibility is the bifurcation of the industry into Chinese and non-Chinese purchasing groups, reflecting wider geopolitics.

"What's happening now is not uncharted waters, but it is rare for the telecommunications industry to splinter into multiple buying groups  usually standards are developed and followed for the benefit of the industry," said 650 Group, a market-research company, in a blog published last October.

Guillén prefers not to speculate on geopolitics and whether they are a blessing or a curse for his part of the business. While the backlash against Chinese vendors has brought some 5G deals for Nokia in Europe, geopolitics also looks partly responsible for the current global shortage of semiconductors, as Huawei has stockpiled equipment and other vendors have responded.

"We saw this coming and took action one year ago," says Guillén, when asked about the impact of the chips shortage on Nokia's network infrastructure group. "We keep working with suppliers and I have met more in the last six months than in six years. It is a tricky situation, but so far so good."