Despite the departure of its VP of engineering, Jay Parikh, Facebook plans to continue moving forward with telco collaborations, open networking and connectivity initiatives launched during his tenure.

Parikh announced his departure on his Facebook page Tuesday. He will stay on at Facebook for several months, and has no immediate plans beyond the company.

Parikh had a broad remit, which will be filled by several people, according to a company spokesperson. 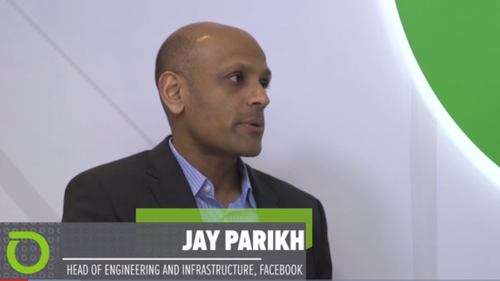 Jay Parikh talking to Light Reading at MWC 2018.
Learn more about how the cloud is transforming the service provider sector at Light Reading's cloud content channel.

He joined the company ten years ago, overseeing infrastructure to support its rapid growth. When Parikh joined, "our entire engineering team sat in one building all on one floor, and we were buying off-the-shelf servers and renting data center space. We supported a few hundred million people mostly using the facebook.com website. I don't think any of us could have imagined that we would now be supporting a global community of almost 3 billion people using our family of apps mostly on mobile phones," he said.

Now, Facebook designs and builds its own infrastructure, "from the data center buildings, to the cooling systems, to the internal electrical distribution, to the different types of servers, to the network switches, to the subsea cables, and many other infrastructure components," Parikh said. He oversaw all of that.

Infrastructure design and construction is where Facebook has often collaborated with telcos, most notably through the Telecom Infrastructure Project (TIP) and Open Networking User Group (ONUG) initiatives and on the development of open source networking equipment, servers and even data center racks.

After Parikh's departure, Facebook infrastructure will be led by David Mortenson, VP of engineering, Yael Maguire, director of engineering, and Dan Rabinovitsj, connectivity group VP, who will continue their work on connectivity, including working with telcos.