"In the short term, it's not good enough," argued Richard MacKenzie, a principle researcher with BT, during Light Reading's Open RAN Digital Symposium this week. But he added: "It's early days for open RAN."

"In the long term, it's a real competitor," he predicted.

MacKenzie's overall attitude echoes that of Neil McRae, the chief network architect of BT, who outlined his own thoughts on open RAN last month. "Could we build the network we have today purely with open RAN? Absolutely not," McRae said then.

BT's MacKenzie, in comments this week, offered a similar take: "We have to be aware that there are some drawbacks" with current open RAN deployments.

Importantly, MacKenzie specifically pointed to open RAN costs as a topic in need of further work. "We don't focus too much on the cost savings as the primary goal," he said, explaining that BT "is not going to sacrifice the customer experience just to achieve these cost savings."

However, MacKenzie said BT is deep into a research project to discover more about the capabilities of open RAN. He said the company, as part of its work in the Telecom Infra Project (TIP), is testing some open RAN technologies in East Anglia, near its London headquarters. 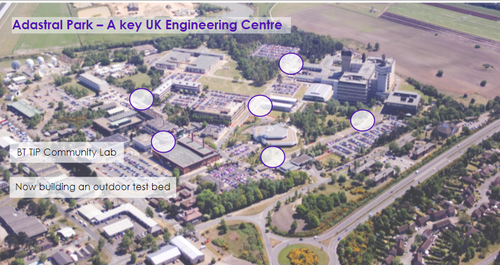 BT is running open RAN equipment from the likes of Accelleran and others across six sites. Click here for a larger version of this image.
(Source: BT)

He said BT would feed its findings back into TIP in order to move the open RAN ecosystem further toward maturity, and to ensure vendor interoperability.

Open RAN, of course, is a major new trend in the 5G industry that promises to open up network elements via interoperable interfaces. Such technology would allow operators like BT to mix and match products and services from different vendors  a major change from the networks of today that are often supplied by just one vendor.

Open RAN proponents argue that the technology can be cheaper and just as good as classical, traditional open RAN equipment. However, Vodafone remains the only major UK operator with a firm open RAN commitment. Earlier this year, Vodafone named suppliers for a 2,500-site deployment in parts of the UK where it must replace Huawei equipment before 2028, under government orders.