Open RAN, it is fair to say, has some image problems. It is purportedly about supplier diversity, and yet Intel seems impossible to avoid. It is no more a priority than energy efficiency has become to the world's biggest operators, but those Intel chips are seen as power hogs in parts of the telecom industry. Reconciling these contradictions is awkward for open RAN enthusiasts.

Arm's involvement could help. The UK-based chip designer  currently the target of a $40 billion takeover attempt by Nvidia  would be found in the guts of most traditional basestations, says Panch Chandrasekaran, the director of Arm's 5G carrier infrastructure segment. The opposite looks true in today's nascent market for open RAN, where Intel has control. But Arm, wielding chips renowned for their power efficiency, is on the attack. 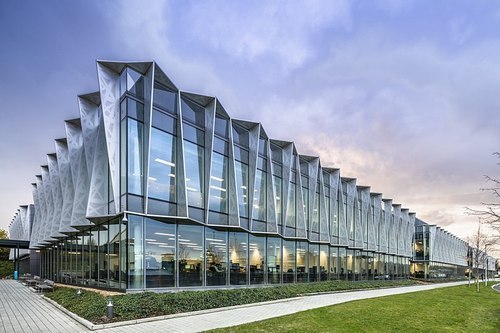 Arm's swanky headquarters near the UK city of Cambridge.

Early next year, it will cut the ribbon on a 5G lab in New Jersey with a focus on open and virtual RAN technologies. Run in partnership with Tech Mahindra, an Indian systems integrator, the new lab  in the full spirit of open RAN diversity  is intended to be a place where companies from across the value chain can mingle freely and hopefully come up with Arm-based alternatives to Intel.

"Diversity of the ecosystem, including hardware and software, has become very critical," Chandrasekaran tells Light Reading. "Operators wouldn't like to go from where they are today to a CPU [central processing unit] architecture lock-in."

Unsurprisingly, then, Arm has already secured support for its lab from Dish Network and Vodafone, two service providers in the vanguard of the open RAN movement. It can also reel off a list of important technology partners, including Marvell, Nvidia and Qualcomm from the semiconductor side, Mavenir and Parallel Wireless in the software community and Google Cloud among the hyperscalers.

Arm needs strong partnerships to succeed. Whereas Intel designs and produces the x86 processors found in most servers, Arm sells only blueprints to other chip designers, mainly for use in smartphones. "Our partners license our highly power-efficient cores and slap their secret sauce on top of that," says Chandrasekaran.

Encouragingly, there are signs these Arm-based chips could soon appear in open RAN networks. Using a technique called inline acceleration, forthcoming chips designed by Marvell, Nvidia and Qualcomm would effectively bypass the x86 CPU in the distributed unit, a part of the network where much of the RAN computation and processing takes place. "You need to have a scalable and highly power-efficient way of implementing this physical layer and we believe inline is the way to do it," says Chandrasekaran.

A recent survey carried out by Heavy Reading (a sister company to Light Reading) showed that big service providers would mainly prefer inline to lookaside, an alternative form of accelerator that places heavier reliance on the x86 CPU. Experts reckon they would boost performance and cut signaling delays, or latency, on large and busy networks.

They will not be for everyone, though. Running an x86 CPU alongside an Arm-based inline accelerator means adding software complexity. Despite announcing a tie-up with Nvidia in late 2019, Ericsson has indicated it will stick with Intel's lookaside accelerators when it launches new RAN software next year. "You are not going to be able to support all platforms from day one," said Per Narvinger, Ericsson's head of product area networks, when the software was first announced in June.

This is partly where Arm believes the new lab will help. "One of the goals is to accelerate the software ecosystem engagement and bring about more solutions," says Chandrasekaran. The involvement of Mavenir and Parallel Wireless, previously seen as Intel loyalists, is particularly good news for Arm.

Still, dislodging Intel and x86 in other parts of the network will be much harder. An inline accelerator might be a superior alternative to the CPU in the physical layer (also known as baseband or Layer 1), but it would not help in the so-called data link and network layers (Layers 2 and 3, respectively). Here, the risk is that Intel simply carries its dominant position in servers over to open RAN.

Nvidia is one Arm partner determined to mount a challenge. BlueField-3, a product it will launch in mid-2022, is a data processing unit that would  in combination with the graphics processing units that Nvidia pitches for inline acceleration  allow Nvidia to bypass x86 entirely in Layers 1, 2 and 3, according to Ronnie Vashista, Nvidia's senior vice president of telecom.

Marvell, moreover, already claims to have developed Arm-based chips that could be used in future open RAN networks to support higher-layer processing. "We do silicon for Layer 2, but not software," says Raj Singh, the executive vice president of Marvell's processors business group. "A number of customers use us both for baseband and for Layer 2 and Layer 3 processing."

Another huge endorsement of Arm's technology comes from AWS, whose Graviton2 chips are based on Arm blueprints. Dish, which plans to run its mobile network on AWS, believes Graviton2 processors provide "up to 40% better price-performance over comparable current-generation x86-based instances."

Arm processors alone are unlikely to address the entirety of the performance gap between open RAN and traditional networks, acknowledges Chandrasekaran. "There are other factors that come into play," he says. The most important thing about Arm's new lab is that it could help broaden the open RAN ecosystem beyond Intel and x86. Otherwise, as Chandrasekaran points out, operators may simply be trading one form of lock-in for another.