"We believe that those [lit buildings] are going to be key to the evolution of our network," he said, noting that those same on-net facilities open many new doors beyond CenturyLink Inc. (NYSE: CTL)'s 5,000 or so central offices and help to establish what could become "infinite hosting capabilities for new types of software." 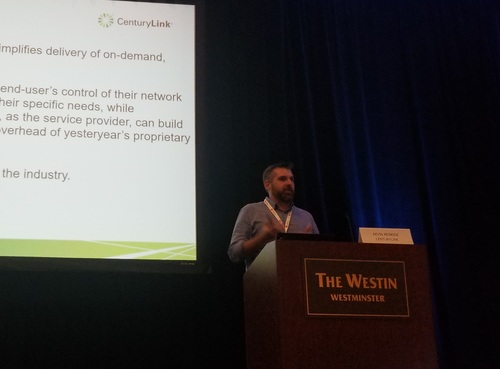 With that in mind, he said vendors also need to "think differently," and look at what they could do with another carrier to tap into their NFV infrastructures and into this notion of hyper-local access. "NFV really introduced a new kind of cloud," McBride said.

"We really believe that being thousands of feet away from the subscriber with compute infrastructure is going to create a brand new plane of... capabilities for new software development," he explained.

And when McBride speaks of this new virtualization footprint, he's speaking of tying in data centers from all -- from CenturyLink's cloud to those from third parties such as Microsoft Corp. (Nasdaq: MSFT) and Rackspace . "We believe that customers don't want just one cloud... You don't want to put all your eggs in one basket."

McBride also talked up how hardware-based CPE (customer premises equipment) is becoming virtual-based CPEs, and starting to "marry-in" x86 technology in the form of a compute device that fits inside and tie in apps that used to come in the form of appliances.

That means the industry is moving away from heavy appliances to new virtual services sitting on the edge and other parts of the network that utilize a common orchestration system.

CenturyLink, with its 450,000 route-miles of fiber around the world, has also recently taken on a more global stance with SD-WAN, having launched that service in 36 countries beyond its US footprint for it. (See CenturyLink Goes Global With SD-WAN.)

One major objective of this is to help customers maximize their control of the network, but maybe not too much control.

Proving access to a wide range of knobs and dials can create perhaps too many flavors of service. From an operational perspective, "turn that way down" and enable a couple of flavors, he said, drawing on some lessons that CenturyLink has already learned.