The contrast between Finland's just-finished 5G auction and the one still underway in Italy couldn't be starker.

The home of Nokia yesterday wrapped up an auction of spectrum in the 3.4-3.8GHz range that raised just 77.6 million ($89.3 million) for the government, barely enough to refurbish some local saunas. Italy's runaway sale of 3.6-3.8GHz spectrum, by contrast, yesterday passed the 6 billion ($6.9 billion) milestone. Assuming the government doesn't waste it on celebratory Prosecco, the eventual windfall could plug more than a few holes in the public-sector purse. (See Italy's 6B+ 5G Auction Risks Roman Ruins.)

Just don't expect Italy's mobile operators to emerge unscathed. Crippling debts and the challenge from an aggressive new entrant in the form of Iliad already weigh heavily on the main players. Now they are looking at a spectrum bill that is likely to provoke cutbacks and divestment activity. Even trade unions in Italy have voiced their fears.

Despite conjecture in the mainstream press about the high cost of 5G licenses, the contrasting examples of Finland and Italy are proof that 5G frequencies are not inherently expensive -- that is, unless you think 5G has a much better shot at becoming the next big thing in Italy than it does in Finland. Of course, Italy is a much larger market than Finland, but the disparity in valuations takes this size difference into account. Italian auction bids valued mid-band airwaves at about $0.36 per MHz per head of population (per MHz pop) at the end of last week. Finland's operators paid just $0.04 per MHz pop for their 5G licenses. 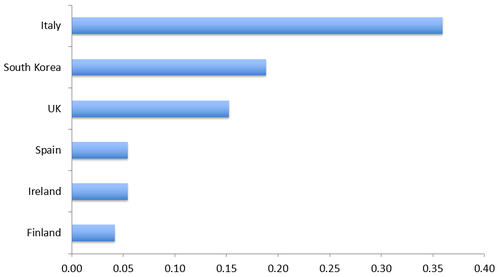 Finland's auction has been restrained for a couple of reasons. First, the government decided to auction three very large spectrum blocks of equal size. Second, the Finnish mobile market has effectively consolidated into a three-player affair, a ménage à trois in which everyone is reasonably content.

In Italy, the government appears to have chopped a 200MHz block of spectrum into four uneven chunks, two of 80MHz and two of 20MHz. A 20MHz channel would not really be enough for most advanced 5G services, though, and operators know it. Four of them are fighting over these airwaves after competition authorities recently opened the door to France's Iliad, one of Europe's most aggressive mobile operators. Their aim was to prevent Italy from consolidating into a dreaded three-player mobile market with the merger of 3 Italia and Wind.

In countries that have yet to auction 5G spectrum, regulatory authorities would do well to remember the experience of 3G, when overpayment for spectrum left telcos hamstrung in major markets like Germany and the UK. Italy raised $10.1 billion during that process. With bids hitting $7.1 billion, its 5G auction is already much closer to that outcome than anyone thought possible.