There's another kind of bet going on inside sports stadiums across the US right now -- what kind of infrastructure is needed to provide connectivity: distributed antenna system (DAS), small cells, WiFi or some combination thereof?

Regional wireless operator Nex-Tech Wireless , for one, is placing its money on small cells. It has launched what it says is the first commercial deployment of a cloud-radio access network (C-RAN) approach to small cells. The Kansas-based operator recently deployed Airvana Inc. 's small cell system at the 7,600 seat Gross Coliseum at Fort Hayes State University, a deployment it got up and running in nine weeks -- in time for the University's May graduation ceremony.

"We believe it's the first time that small cells have been used exclusively to provide 4G coverage in a stadium," Josh Adelson, Airvana's director of product marketing, tells Light Reading. "In other situations, they fill holes, but usually a DAS is required. In this case, all 4G coverage was provided by OneCell."

According to the companies, the small cells at Fort Hayes stadium achieved peak download speeds of 66 Mbit/s, had a 99.7% connect setup success rate, .5% connection drop rate and 100% macro handover success rate. Nathan Sutter, Nex-Tech's director of Network Operations & Engineering, says that the end cost was about half as much as it would've been to upgrade the 3G DAS system that was in place.

"For us its another tool in the toolbox to help us win the war of customer experience," Sutter says. Nex-Tech is up against both AT&T Inc. (NYSE: T) and Verizon Wireless in the markets it serves in Kansas.

A case for small cells
Small cells worked well for Nex-Tech because of their cost and ease of deployment, but also because of the size of the deployment. It wasn't huge, although Michael McFarland, senior director of product management for Airvana, says it could've been. Airvana's been requested to bid on 100,000-seat stadiums that are typically served by DAS, he says. (See Unfinished Business: Stadium Wireless in Brazil.)

Fellow small small cell vendor and competitor SpiderCloud Wireless says it's also been seeing the pendulum swing away from DAS to small cells in venues. CMO Ronny Haraldsvik says that small cells turn the DAS model upside down with payback in months rather than years and by removing the need for the chargeback model of tower companies securing rights then leasing to the wireless operators. (See SpiderCloud Spins Web of Small Cell Partners .)

"Small cells as overlay is cheaper, faster and add capacity within every radio," he wrote in a recent email to Light Reading.

What's up with DAS?
That said, while there is clearly a growing interest in the small cell alternative, a lot of venues, company owners and even service providers have yet to shake the notion that DAS is necessary to cover large areas with stringent data needs. (See The No-Streaming Bowl.)

At Chicago's Trump Tower hotel in the heart of downtown, for example, Director of IT Jerry Chang said they've never even consider small cells for connectivity. The hotel needed a fiber-fed DAS to meet its RF needs in a building that's so tall and surrounded by both water and other tall buildings. It started with Sprint Corp. (NYSE: S) as the anchor tenant in 2008 and has since upgraded with AT&T and Verizon, although not T-Mobile US Inc. . (You can ask owner Donald Trump why not.)

Likewise, on a panel on stadium connectivity at May's INTX Show in Chicago, none of the participants from T-Mobile, Cisco Systems Inc. (Nasdaq: CSCO) -- which provides small cells itself -- Cox Communications Inc. or NASCAR seemed to consider small cells as a viable option for stadiums, instead looking at a combination of DAS and WiFi.

"Small cell works great in large buildings with a concentrated carrier," Steve Rowley, SVP of Cox's business division said at the show. "In a general forum, you'll have multiple technologies with multiple carriers  most forums will require a DAS."

It is certainly not a one-size-fits-all approach, but there is -- at least -- no debate on whether connectivity is needed in stadiums. It's become as essential as hot dogs and beer. Independent testing company RootMetrics began benchmarking stadium coverage earlier this year for that reason. (See Verizon Still Best Network, RootMetrics Finds.)

In its first test of five large stadiums across the US, the company found that each had a different approach to connectivity and also a different interest level in creating a great mobile performance for consumers. Most were looking at WiFi in conjunction with cellular. RootMetrics plans to study 100 stadiums before the end of the year. (See Carrier WiFi's Not Winning in Sports Arenas.)

"Two of five venues had [WiFi], and a couple had DAS," RootMetrics CEO Bill Moore told Light Reading earlier this year. "It's a combination. Sometimes the cellular operator may put in the DAS and sublease to others, but it's really all about how you deploy on top of that."

Also, a good article with extra background and context. Thanks Sarah.

It is a little bit ironic that the "Small Cell" graphic on the LR home page uses a honking great macro cell. Not to worry, we get the idea: )))) Wireless 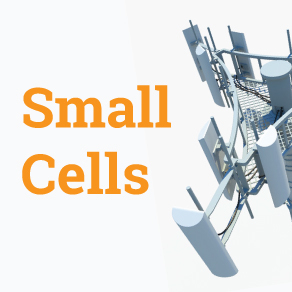