Apple's iPad Air Adds More LTE, But at a Price

Apple says its latest tablet, the iPad Air, supports more LTE bands than any other tablet in the world, but its customers will still pay a hefty premium for the 4G connectivity.

The latest iPad is the thinnest, lightest, and fastest tablet yet from Apple Inc. (Nasdaq: AAPL). In unveiling it Tuesday, Phil Schiller, the company's senior vice president of worldwide marketing, said it also "expanded the ability to have wireless broadband access around the world with LTE on more carriers."

Apple called the LTE device essential for global travelers, yet it still costs $130 more than the WiFi-only iPad Air. The WiFi-only version of the one-pound, 9.7-inch device will retail for $499, while the LTE version starts at $629.

CEO Tim Cook said Apple sold its 170 millionth iPad this month. It's done so well for the company that it won't be lowering the price of its second version substantially, either. The iPad 2 will now sell for $399, just $100 less than its successor. The company also unveiled its iPad Mini followup today, which will support the same LTE bands and retail for $399. (See: Apple Adds 4G LTE Flavors as It Shrinks iPad.)

"Regardless of what you hear or read about how many are sold or activated" by the competition, "iPad is used more than four times more than all those other tablets put together," Cook said. "This is what is important to us."

The network on which it's used is likely less important. Apple hasn't broken down its WiFi versus LTE use before, but NPD Group Inc. said in May that only 12 percent of tablets in the US connect to 3G or 4G networks. WiFi remains the network of choice, even for users who purchase the LTE version. As such, Apple also upped the ante on WiFi by promising twice the data transfer rate as the original iPad on 802.11n as a result of its use of multiple input multiple output antennas. (See: New iPad Ushers in LTE Era.)

The iGiant didn't say what chip would be providing the LTE connectivity in the Air, but it did say it will include its new A7, the processor it introduced with the iPhone 5S. (See: New iPhones Use Old Qualcomm LTE Chips and Apple's New iPhones Pack in LTE Bands.)

Daring to take the stage the same day as Apple, Nokia Corp. (NYSE: NOK) also unveiled a tablet, its first -- the Lumia 2520 -- on Tuesday. The Finnish device maker, which is being acquired by Microsoft Corp. (Nasdaq: MSFT), is willing to make a much bigger bet on LTE. Its Windows-based, 10.1-inch device will come only in LTE/WiFi combos. (See: Nokia Sells Devices Business to Microsoft and Euronews: Nokia Tablet Due Next Month?)

Ifi Majid, Nokia's head of product marketing for smart devices, said at Nokai World in Abu Dhabi that all its future tablets would include LTE. "We're experts in mobility, and that's what we're designing for," Majid said, according to Mashable. "All of the tablets that we create will be LTE- and WiFi-enabled."

Both Verizon Wireless and AT&T Inc. (NYSE: T) will carry the Nokia Lumia 2520. Verizon, AT&T, Sprint Corp. (NYSE: S), and -- for the first time -- T-Mobile US Inc. will sell Apple's iPad Air and Mini on LTE beginning next month.


AT&T, meanwhile, is offering $100 off new tablets with a 2 year contract from Nov 1.
Reply | Post Message | MESSAGES LIST | START A BOARD 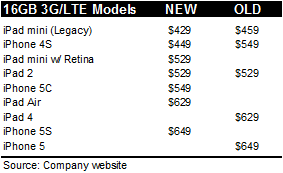 Sarah Thomas 10/23/2013 | 2:47:45 PM
Re: LTE v WiFi prices Yeah, Apple has to be going after new iPad owners, since the others aren't really on an every two year replacement cycle like cell phones. And, I imagine some who don't yet have a tablet were holding out because of the price, so seems like a bad idea to keep it so high on all the options. Will be curious to hear how it sells.
Reply | Post Message | MESSAGES LIST | START A BOARD


All this speculation is cracking me up! Can't wait to tell you all about our next #uncarrier move. Tomorrow, 9AM PT at @TMobile