Charter Communications is shining more light on its future mobile and wireless strategy, exploring the use of a "dual SIM" capability that could tap into both licensed as well as unlicensed spectrum and build on its current MVNO agreement with Verizon Wireless.

"That's probably not a 2019 event," Charter CFO Chris Winfrey said, referring to when the company might take a dual SIM approach that would enable Charter's mobile subs to more easily connect to multiple networks.

Charter hasn't revealed its full plan for the dual SIM project, but Rutledge noted that Charter continues to run tests in the 3.5GHz CBRS band in the hope that tapping into that shared swath of spectrum could help the MSO offset some of its MVNO costs.

Charter is already experimenting with the unlicensed portion of the CBRS band, but has not made any commitments to bid for licensed CBRS capacity. Charter is also continuing its usage and deployment of WiFi.

"It's really a lease-buy-build analysis  There are multiple spectrum opportunities, some of which are free and some of which are licensed," Rutledge said, noting that Charter will explore this in the home, on the MSO's physical plant and in macro towers. He said Charter believes "the most significant opportunity" may be to expand and add wireless and mobile capacity on its own network using strand-mounted devices.

As Charter evolves its mobile and wireless network strategy, it continues to push ahead with Spectrum Mobile, a product being bundled with broadband that relies on the Verizon MVNO.

Charter added 176,000 mobile lines in Q1, ending the quarter with 310,000 mobile lines. That total is made up of a mix of customers on Spectrum Mobile's unlimited and by-the-gig plans, the company said.

Charter's mobile line adds in Q1 were about 26,000 more than what BTIG analyst Walter Piecyk expected, and about 6,000 more than the Xfinity Mobile lines Comcast added in the first quarter. 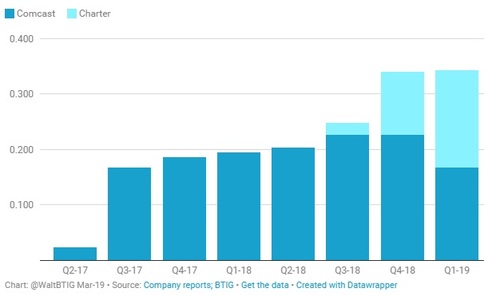 "Spectrum Mobile is ramping up quickly, as expected," Rutledge said.

Winfrey noted that Spectrum Mobile continues to be a "meaningful driver" for connectivity sales and retention. But he stressed that the goal is for Charter's mobile business to be profitable on a stand-alone basis once it reaches scale.

Losing its wireline voice
Charter's decision to sell mobile more prominently inside the bundle is also affecting its wireline voice business, now considered a $9.99 per month "bolt-on" to a Charter triple-play comprising broadband, mobile and video services. Reflecting this updated view, Charter lost 120,000 residential wireline voice customers in the period, widened from a loss of 54,000 in the year-ago quarter.

Broadband was again a bright spot in Q1, as Charter added 428,000 residential and small/midsized Internet subs in the period.

Charter has wrapped up its network upgrade to DOCSIS 3.1 and the introduction of 1 Gbit/s services. Rutledge said the D3.1 network deployment cost just $9 per passing.