T-Mobile has switched on the largest 5G network yet across the US, covering 200 million Americans at launch, but won't offer compatible 5G devices until the end of this week.

T-Mobile had originally announced the network would go live December 6, but it pushed up the launch date.

The operator now says that its 600MHz lowband 5G network is live today, covering 1 million square miles, 5,000 towns and cities, and 200 million potential customers in the US. T-Mobile says, however, that devices that can use the new network -- the $900 OnePlus 7T Pro 5G McLaren and the $1,300 Samsung Galaxy Note10+ 5G -- will be in T-Mobile stores on the original network launch date, Friday December 6. 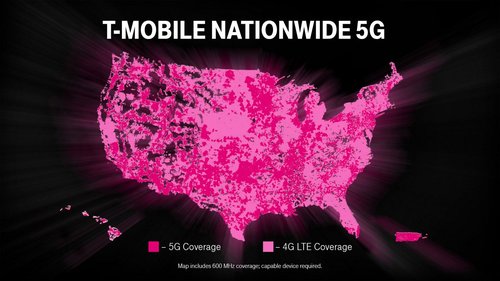 The operator stresses that its 600MHz 5G network works indoors, unlike highband millimeter wave (mmWave) 5G from AT&T and Verizon, which cannot penetrate walls, many windows and foliage.

Download speeds for the T-Mobile network will start at around 100 Mbit/s. This is far slower than the gigabit-plus speeds offered by mmWave 5G, but the T-Mobile service is offered over a far wider area.

T-Mobile isn't charging more for its 5G plans than its 4G offerings. Verizon has said it will eventually charge a $10 premium on its 5G mmWave service, although it hasn't started charging this fee on all its plans yet.

AT&T isn't yet making its mmWave plans available for consumers, only businesses and developers, although it plans to launch its initial 850MHz lowband 5G network this month.

Why this matters T-Mobile is launching its 5G network just ahead of the December 9 beginning of the trial in a lawsuit of 13 state attorneys general against the carrier's $26.5 billion planned merger with Sprint.

T-Mobile has constantly sold a nationwide 5G footprint as one of its motivations for the merger. The operator stresses that its first 5G devices will also work on the Sprint 2.5GHz midband network frequency.

MaddenK 4/8/2020 | 9:34:24 AM
Re: Interesting stats. Stats about civil registration and it need is very important data that should be synchronized with the higher authorities to get a better plan for state. Developing an application from can provide you to sink data with access an your mobile phone which can be traced on any time and from anywhere.
Reply | Post Message | MESSAGES LIST | START A BOARD

MaddenK 4/8/2020 | 9:33:34 AM
Re: Interesting stats. Stats about civil registration and it need is very important data that should be synchronized with the higher authorities to get a better plan for state. Developing an application from can provide you to sink data with access an your mobile phone which can be traced on any time and from anywhere.
Reply | Post Message | MESSAGES LIST | START A BOARD

JackOscar 2/16/2020 | 11:39:28 PM
5G In certain spots 600MHz 5G will be significantly quicker than LTE, the organization told VentureBeat, while in others, clients won't see as a lot of contrast. Clients won't be charged extra for getting to the 5G arrange .

sarahlily 12/11/2019 | 5:44:02 AM
5G I think 5G is not only significant for the reason that it has the potential to support millions of devices at brilliant speeds, but also because it has the possible to alter the lives of people around the world. Developments in 5G expertise can help make life enhanced. I also run an affordable web design agency in USA so, I know the importance of 5G.
Reply | Post Message | MESSAGES LIST | START A BOARD

Additionally, Jon Brodkin at Ars Technica found that the Nationwide service follows a Marketing Standard established by The National Advertising Division nearly a decade ago when US Populations were 293M. Today, the US has 330M people. The NAD is the advertising industry's self-regulatory body.
Reply | Post Message | MESSAGES LIST | START A BOARD
EDUCATIONAL RESOURCES