Mike Pompeo, the US Secretary of State, knows just how much is riding on the UK's long-awaited but imminent decision about Huawei. If Prime Minister Boris Johnson -- derided as a Trump lapdog by critics -- refuses to ban the controversial Chinese vendor, other countries may feel more confident about resisting US pressure, especially if there are no consequences for the UK.

With a UK decision reportedly due on Tuesday, Pompeo has fired up Twitter, his boss's favorite communications tool, and warned Johnson he has "a momentous decision ahead on 5G." There are no outright threats this time. Instead, Pompeo draws attention to a Daily Mail article written by Tom Tugendhat, a member of the Johnson government and the current chairman of the UK's Foreign Affairs Committee. "The truth is that only nations able to protect their data will be sovereign," warns Tugendhat, as Pompeo happily points out.

The UK has a momentous decision ahead on 5G. British MP Tom Tugendhat gets it right: The truth is that only nations able to protect their data will be sovereign. https://t.co/8lLEUEUxdL

A flurry of press reports in recent days suggests the Trump administration will not get the decision it wants. The smart money is on a limited role for Huawei, whose products -- insist opponents -- could include "backdoors" for Chinese spies or saboteurs. That might entail a ban on the use of Huawei products in the "core," a sensitive, decision-making part of the 5G network. In addition, or alternatively, the UK might seek to impose limits on how much 5G equipment is provided by the Chinese vendor. Neither of these remedies would satisfy US hardliners, who want a full ban.

Pompeo is right to call the decision "momentous." The US could respond to half measures by denying Johnson the favorable trade deal the UK desperately needs as it prepares to leave the European Union. The Trump administration could also try booting the UK out of "Five Eyes," an intelligence-sharing club of English-speaking nations (its other members are Australia, Canada and New Zealand). 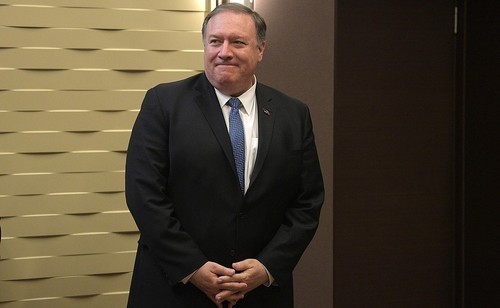 US Secretary of State Mike Pompeo has been unrelenting in his criticism of Huawei.

European officials and some commentators think Trump and his lieutenants are bluffing. The UK is too important to Five Eyes to eject on account of a bad Huawei decision, they say. The US would also benefit from a trade agreement with the UK and lose out if one cannot be reached.

Johnson cannot afford to be this unconcerned, especially after Pompeo's eleventh-hour intervention. US officials know other countries are watching closely to see what happens in the aftermath of a decision that goes against US wishes. If those countries see the lack of a stern US response as evidence of a bluff, they will feel emboldened to ignore any US threats over Huawei -- or even other, unrelated matters. A UK permit for Huawei could, therefore, deal a massive blow to the Trump administration's international campaign against the company.

Banning Huawei would present other risks. It would antagonize the Chinese and upset the UK's service providers, which have grown heavily reliant on Huawei's radio equipment (but not its core network products) in the 4G era. A full ban, say operators, would slow down 5G deployment, drive up costs and reduce competition in the mobile infrastructure market, which already lacks many alternatives to Huawei. Its opponents are touting the introduction of more open radio access networks -- based on interoperable software and general-purpose equipment -- as a potential answer. Not everyone is convinced. Michael Trabbia, the CEO of Orange Belgium, says open RAN is "not yet mature enough" to be a realistic substitute.

The British government probably hopes it can win the US around to its compromise and avoid any backlash. But this would set a precedent for every other country that has been under US pressure to ban Huawei. And Pompeo's reference to a UK politician who draws no distinction between the core and the radio is not encouraging. "That difference is less clear in a 5G network that handles more data at high speeds," writes Tugendhat in his Daily Mail article. The decision on Huawei could be the most difficult Johnson has ever had to make.

If there was an award for the technology with the highest ratio of hype to reality, cloud-native network functions would be a .

If there was an award for the technology with the highest ratio of hype to reality, cloud-native network functions would be a contender.