It's 5G vs. WiFi 6 for the Factory of the Future

5G proponents argue the technology can revolutionize a wide range of market sectors, from automobiles to smart cities. But this drumbeat is perhaps the loudest when it comes to how 5G will impact the manufacturing industry.

"5G will usher us into an era of precision manufacturing," trumpets Intel.

"5G networks offer manufacturers and telecom operators the chance to build smart factories and truly take advantage of technologies such as automation, artificial intelligence, augmented reality for troubleshooting, and the Internet of Things (IoT)," boasts Ericsson.

And it's true that some manufacturing companies are embracing 5G with both arms. For example, appliance maker Whirlpool recently announced it will replace its WiFi network with AT&T's 5G network, according to a detailed Network World article on the topic. The first phase of Whirlpool's 5G rollout will cover 200,000 square feet in the center of its Ohio plant, and is intended to initially connect around 80% of the company's 100 driverless vehicles. Eventually Whirlpool plans to take over the management of the 5G network from AT&T, placing Whirlpool squarely in the growing "private network" trend.

"This will allow us to go to truly autonomous vehicles throughout the entire plants, for maintenance, for delivery, for everything to support the manufacturing operations," Douglas Barnes, one of Whirlpool's top IT managers, told Network World. He explained that doing so will save the company a significant amount of money.

Whirlpool isn't alone. Samsung, Corning and Ericsson are among the companies that are evaluating 5G in a factory setting.

But 5G isn't the only option when it comes to the "factory of the future."

WiFi as an alternative
"5G will have its place," explained Dave Green, IT manager for Mettis Aerospace. But right now WiFi 6 is "the best fit for us."

Mettis, which recently celebrated its 80th anniversary, designs, assembles and machines components for aerospace products. The company runs a massive manufacturing site -- stretching across 27 acres, 515 employees and 3,000 manufacturing assets, including 60 large presses -- in West Midlands, UK. As the operation's IT manager, Green is responsible for handling the facility's IT needs, which range from high-end IoT sensors to machines originally built in the 1940s.

"We've got the whole spectrum of kit out there," he said.

"We did try WiFi years ago," he said, explaining that the company's first tests of the 802.11n WiFi standard resulted in an almost unusable network that couldn't handle a constantly changing RF environment where stacks of components were shifted around the factory floor throughout the day, cutting off WiFi connections. "It didn't work," summarized Green.

Green said Mettis recently completed a trial of WiFi 6, which uses the new 802.11ax standard, with support from the likes of British Telecom, Boingo, Broadcom, BSG Wireless, CableLabs, Cisco, HPE Aruba and Intel. The test involved streaming a 4K video of a machine press's manipulator arm to see if it would synch up with a wired video stream of the same arm from a different angle, as well as supplementing various wired machine sensors with additional WiFi-connected sensors.

The result? "The WiFi 6 trial has been a massive success," Green said, noting the company is preparing to embark on a major deployment of the technology across its factory floor as part of a five-year upgrade project that will eventually include adding 20,000 sensors to various factory machines and components.

Mettis's tests show that "WiFi 6 as a technology is ready" for a factory setting, said Tiago Rodrigues of the Wireless Broadband Alliance (WBA), a driving force behind Mettis's efforts. The association counts members such as AT&T, Boingo and Cisco, companies that operate both WiFi and cellular businesses. The WBA has been a proponent of looking at ways to combine WiFi 6 and 5G.

Dogs and cats, living together
Indeed, major manufacturing players appear to be magnanimous to the two technologies. 5G and WiFi 6 are "fairly equal" at this point, said Sander Rotmensen, head of product management for Siemens's industrial wireless and security components.

"There is a way to use both," continued Rotmensen, noting that "it really depends on what size of factory you have and what your application is."

Siemens is a major equipment supplier to manufacturing companies around the world, and it also operates its own manufacturing facilities. Rotmensen explained that Siemens has been selling -- and using -- WiFi products in its manufacturing efforts for years, but is now looking at whether it should add 5G to the mix.

"The first results are very promising," Rotmensen said of Siemens's 5G manufacturing tests with Qualcomm. 5G is "very, very flexible" and has plenty of applications among Siemens's customers, including specifically in the automotive sector. 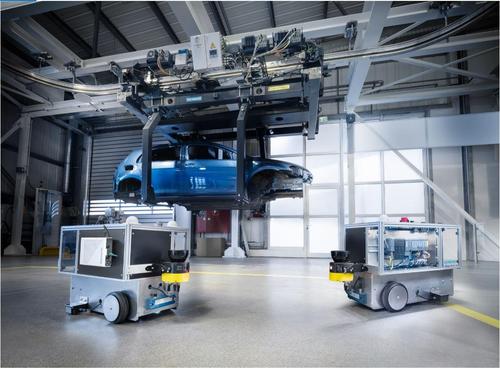 There are pros and cons on both sides of the issue, experts agreed.

WiFi equipment is ubiquitous, backward compatible and cheap. 5G, on the other hand, is often touted as more flexible and robust, and can be used in a wide variety of spectrum bands, including the newer bands that have been earmarked for private networks in places like Germany and Japan.

Either way, the factory opportunity likely will take years to develop, considering the sales cycle for manufacturing companies moves slowly, and manufacturing equipment supporting 5G connections will take some time to get to market.