The first major midband spectrum auction in the US is scheduled to start in June, and expectations are definitely rising.

"Our forecast for the CBRS... spectrum auction is over $2.2 billion," wrote Mobile Experts analyst Kyung Mun in response to questions from Light Reading on the topic. He said that spectrum license values could range from $0.30 per MHz-POP in dense urban areas to $0.003 per MHz-POP in rural areas. The MHz-POP calculation is applied to most spectrum transactions and reflects the number of people covered with the license compared with the amount of spectrum available.

But the Wall Street analysts at research firm Cowen believe the upcoming 3.5GHz CBRS spectrum auction could raise more than double that total. "Auction proceeds could be ~$4.4B in total at $0.20 per MHz-POP," the firm wrote in a recent report to investors.

And operator demand elsewhere in the world could portend even higher prices. For example, an auction of similar 3.5GHz spectrum in Taiwan just passed the $0.51 per MHz-POP mark, dramatically above most expectations. The Wall Street analysts at New Street Research noted that figure is well above the previous global high point for midband spectrum -- $0.41 per MHz-POP recorded in Italy in 2018.

"The CBRS auction will be unlike any other ever conducted. The number of licenses being offered (over 22,000) along with the county-based license areas means there should be something for everyone," CommScope's Rashid Bhatti, who has been leading the company's efforts to sell Spectrum Access System (SAS) technology for the CBRS band in the US, explained to Light Reading in written comments. "CBRS offers unique new opportunities for MNOs, MSOs, Neutral Host Network operators, private enterprises, WISPS, municipalities and many other market verticals, so there could be broad participation."

Bhatti noted that the CBRS band is unique in the world because it is designed to be shared between the US Navy and commercial users. Bhatti explained there are concerns that Navy users could disrupt commercial operations because they get priority access to the CBRS band, but added that "our studies show that our SAS will be able to manage CBRS operation to minimize any impact to incumbent operation."

Satiating midband thirst
The FCC -- the main telecommunications regulatory agency in the US and the government arm in charge of commercial spectrum management -- plans to auction 70MHz of spectrum in the 3.5GHz CBRS band starting June 25. Although the FCC has recently auctioned off plenty of lowband spectrum and highband spectrum, the CBRS auction in June will represent the agency's first significant auction of midband spectrum in recent years.

And that's a big deal for companies in the 5G sector.

Midband spectrum has been described as ideal for 5G because transmissions in such spectrum can both carry plenty of data while also traveling significant distances. That's not true for 5G in lowband spectrum (signals can travel far but can't carry much data) or 5G in highband, millimeter-wave spectrum (signals can carry lots of data but can't travel very far). Indeed, the FCC itself said the 3.5GHz CBRS band "will be an essential part of next generation wireless network deployments, including 5G, throughout the world."

Carriers ranging from Verizon to T-Mobile have bemoaned the relatively lack of available midband spectrum in the US for years now. Thus, the CBRS auction could act as a bit of a salve for that demand.

Radio frequency caveats
However, virtually everyone agrees the CBRS auction won't be much more than a band aid -- rather than a solution -- to the midband problem for 5G in the US. That's because the auction only spans 70MHz, and any single bidder will be unable to purchase more than 40MHz of spectrum in a given area. Those rules are designed to prevent a single, deep-pocketed operator like Verizon from scooping up all the licenses in the auction. And while 40MHz of midband spectrum is certainly significant, it's not nearly enough to satiate all of the big 5G players in the US. After all, the more spectrum a carrier owns, the more customers it can support and the faster speeds it can provide. 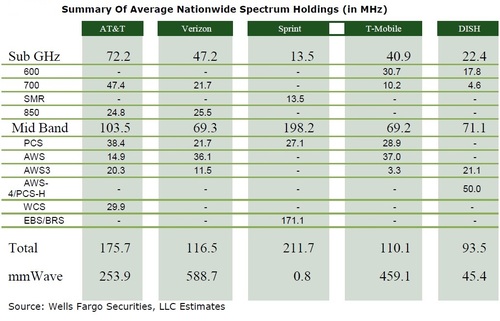 To put the upcoming US CBRS auction of 70MHz in perspective, the ongoing 3.5GHz auction in Taiwan is offering a whopping 270MHz worth of spectrum. And the big C-Band auction of midband spectrum that the FCC is currently hoping to auction at the end of this year could release up to 280MHz of spectrum. That's why some analysts expect the C-Band auction in the US to fetch up to $50 billion in total bids, while the CBRS auction may only fetch $4 billion in bids.

Further, TMF Associates analyst Tim Farrar pointed out that transmissions in the CBRS band are subject to lower power limits than the C-Band, which could limit the distance that CBRS signals travel when compared with the C-Band.

Bidders
So which companies might bid in the FCC's summer CBRS auctions? Plenty of companies have voiced their interest in the space via filings with the FCC. Energy entities like the Utilities Technology Council, fixed wireless providers like GeoLinks, big wireless operators like AT&T and T-Mobile, smaller carriers represented by the Competitive Carriers Association, and cable players like Charter have all debated exactly how the FCC should conduct its CBRS auction.

"CenturyLink is actively exploring using spectrum in the Citizens Broadband Radio Service (CBRS) band to provide high-speed broadband service in rural areas and thus appreciates this opportunity to comment on the planned auction of spectrum in this band," the company wrote in its own filing.

The analysts at Cowen believe cable companies like Charter and Comcast will finally obtain "owner's economics" in the wireless business by bidding on 3.5GHz spectrum licenses in heavily trafficked portions of their cable footprints.

"We believe CBRS could be a 'gift' to Cable as they look to acquire spectrum to build out their own wireless networks, utilizing dual-SIM technology to offload traffic onto their own networks and offset the roaming costs they pay their MVNO partners," the analysts wrote to investors in a report, noting that Charter recently said that roughly 80% of its mobile traffic occurs in just 15% of its cable footprint. "While CBRS may lack the capacity needs for a large wireless carrier, we believe a 2x20MHz swath of CBRS would provide more than enough capacity for a Cable player's wireless business."

Already Charter, Altice and Comcast have made clear their interest in the CBRS band. Charter, for example, wrote to the FCC that it is "currently testing a variety of new technologies for mobile and fixed wireless services using 3.5 GHz spectrum in several urban and rural markets across the country, including Tampa, Charlotte, Denver, Lexington, Los Angeles, and New York -- with additional sites in the pipeline. With the information received from these trials, Charter will evaluate the use of this band in conjunction with its existing infrastructure to deploy licensed small cells using 4G LTE and 5G wireless access technologies to enhance its wireless products."

Cowen predicted Comcast and Charter collectively will spend $1.5 billion in the CBRS auction, which the firm said could help offset the $700 million they're expected to pay Verizon in 2023 for wholesale access to Verizon's network. Both Comcast's Xfinity Mobile and Charter's Spectrum Mobile MVNOs piggyback on Verizon's wireless network, and the two companies pay Verizon for that access based on the amount of data their MVNO customers consume on Verizon's network. If these cable companies operated their own CBRS networks for their mobile customers, they would only have to pay Verizon when their customers travel outside of their CBRS coverage areas.

It's worth pointing out that, if cable companies do end up bidding in the FCC's upcoming 3.5GHz CBRS auction, that would represent a bit of a turnaround. No cable companies are participating in the FCC's ongoing auction of 3,400MHz of millimeter-wave (mmWave) spectrum across the 37GHz, 39GHz and 47GHz bands. That auction has so far generated a total of $6.8 billion in provisionally winning bids, a total that isn't expected to grow much more given the cooling of bidding activity in recent days.

And, according to the Cowen analysts, cable firms might not be the only surprise in the CBRS auction. "While we believe Cable could be among the largest spenders, we do believe there are other dark-horses that could spend meaningfully in [CBRS] Auction 105," the analysts wrote, specifically musing on the possibility of "big tech" companies like possibly Amazon bidding on licenses for industrial IoT applications. Already Amazon is working to build private CBRS wireless networks with partners like Federated Wireless and CommScope.

Cloudy crystal balls
Finally, it's important to point out that auction predictions are notoriously difficult to make. The FCC's massive AWS-3 auction in 2015, which generated an astounding $44 billion in total bids, exceeded just about everyone's expectations. Meantime, the 600MHz incentive auction in 2017 -- initially described as a "spectrum bonanza" that could generate up to $60 billion in total bids -- ended at just $20 billion. T-Mobile is the only big wireless network operator that is using 600MHz spectrum.

That's partly why CommScope's Bhatti declined to offer any specific predictions for the upcoming CBRS auction.

Gabriel Brown 1/14/2020 | 11:04:02 AM
Re: Update Lower power limits are likely to be a big factor here. Experience with mid-band 5G in Europe and SE Asia shows if you want to do outdoor coverage, from macro sites, in C-Band, then you need high power. I would expect this factor to moderate prices considerably (ha!)

The Taiwan C-Band auction is crazy. Operators are bidding up prices to unprecedented levels.

Mike Dano 1/14/2020 | 10:33:51 AM
Update I updated this article to include information about CBRS power limits.
Reply | Post Message | MESSAGES LIST | START A BOARD
EDUCATIONAL RESOURCES