LONDON -- 5G World Summit 2018 -- European operators Swisscom and Three UK are moving aggressively to bring 5G services to market in the next couple of years, but they have played down expectations of a 5G-related boost in customer spending or a capital expenditure increase by their own companies.

In comments that will not be welcome to parts of the equipment industry, Bryn Jones, the Three UK chief technology officer, said he saw no reason for much increase in capital expenditure as his company starts to build a 5G network.

"Networks are like painting the Forth Bridge," Jones told an audience during a panel session at this week's 5G World Summit in London. "You roll out 2G and as soon as that is rolled out you start rolling out 3G. The capex is really substitutional and you manage within the envelopes."

The Forth Bridge is a cantilever bridge in Scotland that workers are constantly repainting to guard against rust. The analogy is apt in that operators start planning for the next generation of mobile technology as soon as they have finished investing in the current one.

"With 5G there might be some incremental capex but if we are clever and add radios that can deal with 4G and 5G we will not see a big uplift in capex," he said on the same panel as Jones.

The remarks were broadly endorsed by Constantine Polychronopoulos, the chief technology officer of NFV at VMware, who said the growing use of software in telco networks would help to keep a lid on costs.

"We are moving toward software-defined radios and eventually upgrading a radio will just be a software exercise and a lot less costly," he said. "Virtualizing the network will address capex as well." 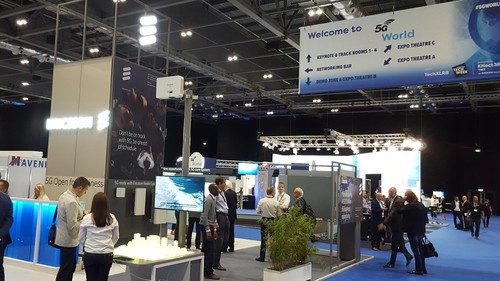 Calm before the storm... the 5G World show floor just before the doors opened.

The operators' comments may trouble major equipment vendors such as Ericsson AB (Nasdaq: ERIC), Huawei Technologies Co. Ltd. and Nokia Corp. (NYSE: NOK), which sell radio gear to operators worldwide and are hoping for a sales boost from 5G technology after the recent squeeze on telco spending.

Some uplift might come from the rollout of more sophisticated antennas, as well as investment in underlying fiber networks, Jones acknowledged. "When you look at massive MIMO, those antennas are heavier and bigger and there is more spending in that area than we had in moving from 3G to 4G," he said. "There is also a much higher requirement for fiber."

Massive MIMO is a so-called "smart antenna" technology that can boost the performance of 5G networks, but many operators are unlikely to use it outside densely populated communities. Indeed, the more widespread rollout of 5G networks could take around seven years, according to Swedish consulting company Northstream, as operators try to maintain capital intensity (or capital expenditure as a percentage of revenues) at current levels. (See NTT DoCoMo: Capex to Fall With 5G Rollout.)

That seems even likelier with operators forecasting little or no increase in customer spending when 5G becomes available.

"The Swiss market is flat and so it is really difficult to add 5G and sell it and personally I think we are having too many discussions around the business case," said Herren. "I think if your main business case is connectivity there is no question about doing 5G, but I don't think you will see additional ARPU [average revenue per user]."

Three's Jones similarly indicated that his main 5G focus is on providing a capacity boost on increasingly congested data networks.

Speaking to Light Reading in advance of this week's 5G World Summit, Arun Bansal, who heads up Ericsson's business in Europe and Latin America, said operators in major cities like London and Frankfurt are now running out of capacity on existing 4G networks.

"We have done analysis and in London between 20% and 30% of sites will run out of capacity next year," he said. "The only option is to use 5G to serve customers and reduce the costs."

Johan Wibergh, the chief technology officer of Vodafone Group plc (NYSE: VOD), has previously indicated that 5G could be a tenth as cost-efficient as 4G technology. Bansal said that kind of improvement was possible in ideal circumstances. "If everything aligns it is one tenth, but that is the best case scenario and depends on spectrum quantities," he said. (See Vodafone CTO: 5G Is Overhyped & It's Mainly About Cost.)

RituGupta 7/23/2018 | 4:24:24 AM
Re: Maybe 5G is a good analogy for painting the Forth Bridge? Service providers can introduce any products or services they like but eventually it all relies on the consumer base to accept or reject that particular something. If a service is much more efficient but the amount to pay for it is too hefty, then I bet the response would not be that welcoming. It is not just about having something that is better, but the price factor also plays a part. Every single aspect of a product or service influences the decision-making process of consumers.
Reply | Post Message | MESSAGES LIST | START A BOARD

kq4ym 6/26/2018 | 9:55:03 AM
Re: Maybe 5G is a good analogy for painting the Forth Bridge? If it becomes true that " operators forecasting little or no increase in customer spending when 5G becomes available," one would have to wonder if even a small capex increase will affect the bottom line for those moving rapidly forward with 5G planning. Or will spending increase dramatically over the years after 5G becomes commonplace?
Reply | Post Message | MESSAGES LIST | START A BOARD

Marketin12124 6/19/2018 | 6:46:54 AM
Maybe 5G is a good analogy for painting the Forth Bridge? The term "painting the Forth Bridge" is a euphemism for a never-ending task.  For 40 years a team of painters continually painted the Bridge, as soon as they finished they had to start again.  Typically it took 4 years to paint the bridge.

However, in 2011 technology developments meant that the new paint would last for 20 years.

5G may just be another "lick of paint" with a very smooth transition from 4G/LTE to 5G but the industry hopes that it will not be neccessary to move to a "6G".

Hopefully, just like the Forth Bridge, 5G technology will be disruptive and have a long-term influence on the industry's innovation cycle.