TelcoDR to go strictly virtual at MWC 2022 as Ericsson returns

At last June's slimline Mobile World Congress (MWC), TelcoDR's Danielle Royston was the talk of the show, taking over the giant Hall 2 stand normally occupied by Ericsson. This year, her company will barely be noticeable as MWC reverts to type.

Barring any last-minute COVID-19 jitters, which could result if a new variant emerges, Ericsson will return to the booth it vacated for the first time ever in 2021, when Royston picked up a tab for several million dollars and built an emporium for the public cloud.

It was an unprecedented and gutsy move by the one-woman consulting firm, whose main financial backer is rumored to be ESW Capital and its founder Joe Liemandt. Royston generated more than her fair share of headlines and attention as visitor numbers sank from 109,000 in 2019 to just 20,000, including only 5,000 from outside Spain. 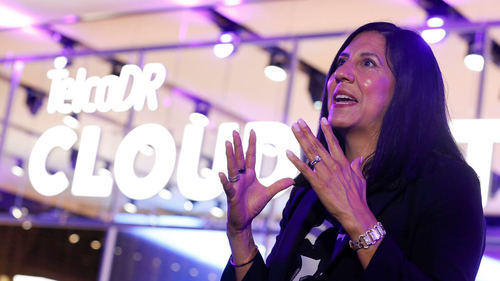 A self-described evangelist for the public cloud, Royston paid $100 million last May to acquire Totogi, a developer of cloud-hosted charging software. She claimed to have another $1 billion at her disposal after setting up a "telco transformation" fund last October. Skyvera, the name of the entity managing that fund, has already bought Zephrytel  a former subsidiary of ESW Capital  and seems rather like a rebranding of that business.

Whatever happens to visitor numbers this year, TelcoDR will not have a major physical presence at MWC 2022. In the true spirit of the public cloud, it will instead offer a "virtual experience" to online participants, although Royston will make the trip to Barcelona and is scheduled to give a presentation.

TelcoDR's virtual platform will apparently feature more than 30 vendors of public cloud software, including Totogi as well as Working Group Two (a core network software developer previously spun out of Norway's Telenor), Allot (a security specialist) and Celona (whose products are designed to support the rollout of private mobile networks).

The message from TelcoDR is partly that physical involvement last year has generated sufficient interest to keep the organization busy in 2022. And few would have expected the permanent annexation of territory that previously belonged to a Swedish company generating $25 billion in annual sales.

That said, there was speculation TelcoDR would move to another stand for 2022 given it became such a big MWC story in 2021. After most of the leading exhibitors had withdrawn last year, citing coronavirus fears, Royston's publicity blitz was either a face-saver for the GSM Association, the event's organizer, or a sign of MWC's diminished status  depending on your perspective.

TelcoDR was eager to cast Ericsson's cancellation and its own moment in the spotlight last year as symbolic of telecom's growing preference for the public cloud over traditional technology. Playing into that narrative was a decision by AT&T to run its 5G network within Microsoft Azure's data centers, announced in the same week as MWC. A few months before that, Dish, the company building America's fourth mobile network, had brokered a similar deal with AWS.

But Ericsson's return and TelcoDR's physical absence this year could make 2021 seem like an aberration, a Marvel Avengers-style blip that wipes out half the population  or more than 80% of it, in the case of MWC  before people magically reappear for the next instalment.

MWC 2022, of course, is unlikely to attract anything close to 109,000 attendees in a world fundamentally altered by the pandemic. But this year's show is certainly shaping up to be more like 2019  a return to basestation bombast and Barcelonan bacchanalia after the public cloud promotion and death by Zoom that characterized 2021. Not everything can be virtualized, after all, and a late-night tapas-eating session in northern Spain has to be fairly high on the list.