The company is claiming the first NB-IoT-based water leak detecting noise logger for the monitoring of water distribution mains pipes. Acoustical noise logging systems are small devices that can be deployed along water mains, which can listen to the sound of the pipe.

"Leaks create a distinctive noise as water leaves the pipe, with smaller leaks producing a higher-frequency sound and larger leaks typically having a lower-frequency sound," says the US Department of Energy. 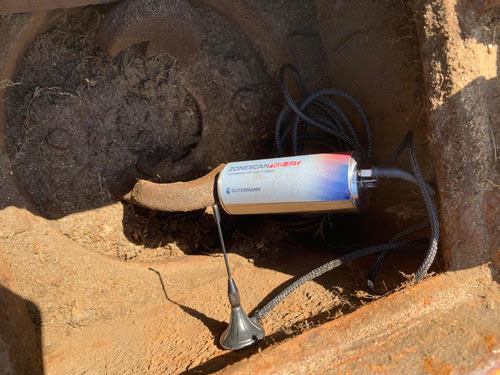 An acoustical logging monitor in action.

The Zonescan cloud software "automatically compares the data of all neighboring sensors every day to identify even quiet leaks whose existence are not recognized by individual loggers," Gutermann says. "A Correlation Indicator provides information about the area in which the leak has been identified," the company adds, saying that leak stats will be displayed via a Google Maps interface.

Gutermann has partnered with South East Water UK to undertake a large-scale NB-IoT trial for a smart city leak detection and metering pilot program. The utility will test water pipes around 2,000 user homes to test the cellular system. The test will use Vodafone's NB-IoT network in the UK.