Is Verizon about to do for NG-PON 2 and software-defined access what its FiOS initiative did for BPON?

The third-largest US operator today announced the industry's first large-scale deployment of NG-PON 2, using equipment from Calix Inc. (NYSE: CALX). That includes the vendor's AXOS E9-2 Intelligent Edge System, which enables software-defined access and the merger of business, residential and wireless backhaul onto a single fiber-based access network. As previously indicated, the deployment will be done this quarter, and Tampa is now the designated market.

Verizon Communications Inc. (NYSE: VZ) had indicated earlier that the deployment was coming and that Calix was one of its named vendors, so there isn't a huge surprise here. Nonetheless, it's a significant step forward for NG-PON 2, the passive optical network standard that can support symmetrical 10 Gbit/s service, and could be an indication of where the rest of the industry will be headed shortly. It was Verizon's commitment to broadband PON back in 2004 that led to new economics on that front and this could be a repeat performance. (See Verizon Preps NG-PON2 Rollout for Q1 and Verizon Readies Landmark NG-PON2 Trial.)

"You would have to be within Verizon to see the amount of positivity that is there that is similar to when we started to launch FiOS," says Vincent O'Byrne, director of technology planning at Verizon, in an interview. "We have a lot of big initiatives. These are exciting times. We do see ourselves on a positive cusp or tide of deploying new technologies and making a lot of changes to the network." 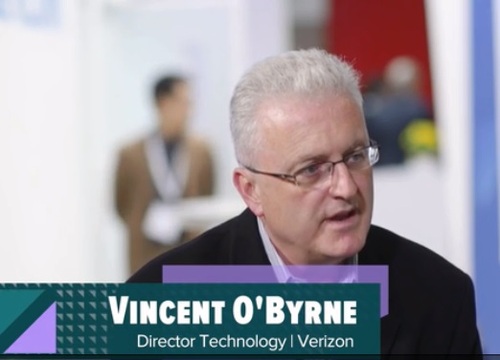 Those changes fit into what Verizon calls its Intelligent Network Edge strategy, designed to simplify and reduce costs across its network by eliminating the need for three separate network infrastructures and also speed its ability to deliver higher-speed services and bring fiber backhaul to the growing set of antennas that 5G deployment will require.

Verizon had named two vendors for NG-PON 2 -- Adtran Inc. (Nasdaq: ADTN) and Calix --. It's now moving forward initially with Calix because that vendor "was, from a timeline perspective, ahead and ready to go out and we have a need to get this deployment out there," O'Byrne said.

Calix CEO and President Carl Russo shares O'Byrne's excitement about what this move might mean for the bigger market. He credits Verizon with being willing and able to move quickly in adopting not just a new PON technology but a new overall approach to access networks.

"When someone like Verizon, who is known for technical leadership and engineering orientation starts to deploy, it's kind of like firing off the starting gun to the market saying, 'Okay guys, this technology is go,' " he says in an interview. "That doesn't mean everybody rushes to it, it means you now have that legitimacy, that this is a production choice [operators] can make, as opposed to, 'I'm not quite sure it's ready.' Now the market begins."

Russo was impressed with the speed at which Verizon is working and the Agile processes it is using. "It has been an interesting partner approach because they have functioned as an Agile partner, it has been quite enjoyable," he says. "It's been hard, too, but they have engaged in a way that a lot of large customers find difficult to engage. There is a lot more exciting stuff coming, this market is real and it is going to get realer."

Verizon isn't saying where it will initially deploy NG-PON 2 in Tampa because that will be a marketing decision, O'Byrne says, and will be driven by customer demand. Because NG-PON 2 can use the same physical fiber infrastructure that is already in use by GPON, Verizon will choose to deploy where customers need more than 1 Gbit/s service, he says.

Because it's newer, NG-PON 2 technology costs more than GPON, but those costs are offset by savings in many areas, as part of the transition to an intelligent edge and software-defined access. For example, the AXOS E9-2 Intelligent Edge System combines subscriber management, aggregation and optical line terminal (OLT) functions into a single box, which offers both power and space savings and significant operational efficiencies, including greater automation, O'Byrne says. The net result is speeds up to 40 Gbit/s throughput and tunable optics for essentially the same cost.

"The ability to move all three service sets into one box saves us an inordinate amount of money from processing, and just the ability to increase the speed at which we can provision systems reduces our OSS complexities that we would have," O'Byrne says. "That is why this overall intelligent edge network, we kind of see it as a big emphasis within the company."

The Verizon executive says the company is continuing to work in the labs with Adtran. He calls it "standard practice" to work with two vendors, and move forward first with one and then the other. Thanks to the interoperability trial work that Verizon has already done, producing the Verizon OMCI specification -- which is being incorporated into the ITU-T G.988 standard -- Calix and Adtran gear will have common interfaces, he says. (See Verizon Proves NG-PON2 Interoperability.)

For Calix, however, this does represent market validation of its five-year journey to become a software platform company, Russo says. (See Calix Gambles on a Software-Defined Reboot.)

"This helps people understand just how much that transformation has been completed," he says. "AXOS being deployed at this level should make it clear what is going on with us, as a platform software company."

optical Mike 4/7/2019 | 11:39:28 AM
Re: Tampa? Interesting they did same here in the Dallas area, I initially had VZ install the ONT and provide service and a couple of years later Frontier took over pretty much seamlessly. I was just excited to get fiber to the home after working on PON at Optical Solutions and Calix for almost fourteen years and finally it was available at my residence.
Reply | Post Message | MESSAGES LIST | START A BOARD

andydyche 8/3/2018 | 3:47:17 PM
Tampa trial update? Hi Carol- great article. Now that we are 6+ months into it, have you heard any update on the tampa trial or any other NGPON2 trials underway? Thanks!
Reply | Post Message | MESSAGES LIST | START A BOARD

brooks7 1/31/2018 | 10:17:15 AM
Re: Tampa? And Carol, one of the interesting parts of OMCI is that the OLT needs to download the software for the ONT.  That means that Calix and Adtran will have to know about each other's software versions and be able to download the right software to the other companies ONTs.

When Verizon was doing OSS work on FiOS we were working with the group in Tampa to make it operational.  They were doing all the development there.  That is consistent with your post Carol.

The real question is this part of the rollout of 5G or is it a residential play.  My guess is the former.  Verizon was quiet open about the services to be offered when FiOS rolled out.

Carol Wilson 1/31/2018 | 9:22:23 AM
Re: Tampa? According to a Verizon spokesman, the company still has facilities in Tampa, and that is where they are doing the production testing of the systems and the various technology elements involved in the Intelligent Edge Network, including NGPON2.

As Vincent O'Byrne says in the story, the company hasn't publicly announced what services it will be offering as that is a marketing choice.

The spokesman says that "over time we expect to support residential, business and wireless use cases. Once the testing is completed, I expect we'd have more to announce in terms of details."
Reply | Post Message | MESSAGES LIST | START A BOARD