Armed with a plan to bring fiber to millions more homes, Frontier Communications is poised to return to revenue stability and perhaps a dash of growth. But it's unlikely that the company, set to emerge from Chapter 11 in the coming weeks, will rise up to become a telecom star, concludes a lengthy analysis of Frontier's post-bankruptcy prospects.

"We wouldn't call Frontier a diamond in the rough. Instead, it's more of a semi-precious stone in the rough," Nick Del Deo and Michael Srour, analysts with MoffettNathanson, noted in the report. "There are clear opportunities to improve performance and invest capital at attractive returns. However, success would be defined as achieving stability or modest growth rather than meaningful growth, and boosting the share of revenue from consumer FTTH broadband to substantial levels will take many years."

They currently expect Frontier's revenue to stabilize in the 2023-2024 timeframe, and project its consumer business to post low single-digit overall revenue growth by 2024 and 2025. 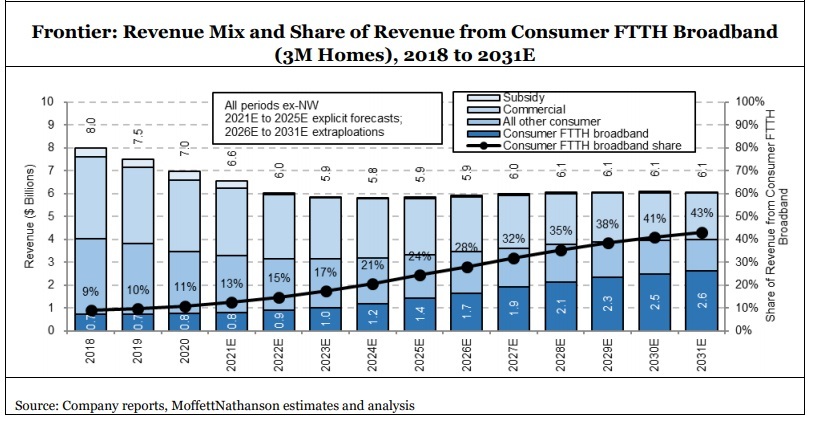 A successful transformation, underpinned by a somewhat aggressive fiber-to-the-premises (FTTP) upgrade plan, "would likely bring Frontier to revenue stability or modest growth, but not make it a star," the analysts added. "A modernized Frontier (3M additional FTTH homes) will likely post flat or modestly positive revenue growth several years out."

But they also believe that the value created from Frontier's modernization plan could be substantial, estimating a target enterprise value of $15.6 billion and a target equity value of $7.7 billion, up from currently implied market values of $13.5 billion and $5.4 billion, respectively. Those figures give full credit for Frontier's first tranche of 3 million upgraded homes and partial credit for follow-on tranches, the analysts noted. They plan to assign a target stock price and rating after the share count has been finalized and the new equity begins trading. 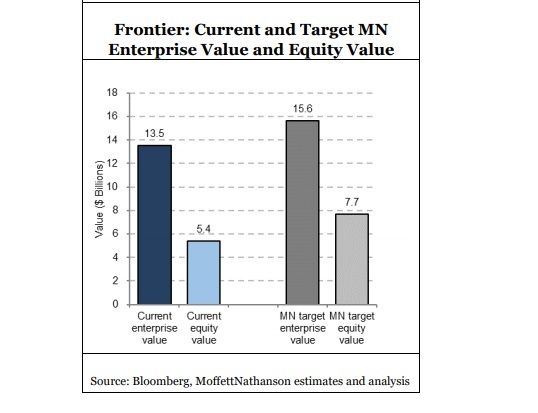 Frontier filed for Chapter 11 bankruptcy protection last year under a plan that erases about $10 billion of debt. Its modernization initiative includes an initial deployment of FTTP to an incremental 3 million homes, with a big focus on targeting upgrades in brownfield areas. That move would raise Frontier's share of 14 million broadband-enabled homes with FTTP to about 40%, up from roughly 20%, the analysts explained.

And if that initial upgrade proves fruitful, Frontier could upgrade up to 6 million more homes with FTTP, and take its FTTP share of broadband-capable homes to about 85%. Under their current model, the analysts see Frontier's annual capex reaching $500 million from 2022 to 2025.

Cable competitors will fight back

The vast majority of Frontier's fiber upgrades will overlap with cable rivals. The analysts said Frontier's plan appears to assume a penetration rate of just over 40% by year five (by tranche), but they also point out that cable operators will be in position to counter FTTP's symmetrical speeds with new DOCSIS 4.0 technologies.

"For all intents and purposes, any performance advantages fiber has over cable today will likely be fleeting, and won't persist by the time it might actually matter to most customers," they explained. "Stated differently, one shouldn't view the competitive landscape as static. The cable operators currently enjoy significant share in markets like those that Frontier plans to upgrade and won't give it up without a fight."

Other opportunities and challenges

Frontier's initial winnings from the Rural Digital Opportunity Fund (RDOF)  $370.9 million across 127,188 locations in phase I of the auction  aren't considered material. But it's possible the company could lock in much more funding in RDOF phase II or via other state and federal broadband infrastructure programs, the analysts said.

They also believe Frontier has some opportunities in the fiber-to-the-tower (FTTT) and small cell markets. Frontier, they estimate, has about 6,400 towers on-net, but another 15,000 unserved towers within a mile of its existing fiber. Any small cell activity would be "greenfield opportunities" for Frontier, they added.

They aren't as bullish about Frontier's commercial services business, which contributes about 44% of total revenue now, but "is not in good shape and is likely to remain a drag on growth."

"Frontier still faces significant challenges, and management has a lot of wood to chop. The benefits of the modernization plan will play out over many years," the analysts wrote.