Undersea cables are in, in a big way.

Facebook, along with a motley assortment of more-often competing global telcos, has said it is now building a giant subsea cable in Africa which will connect Angola, southeast Nigeria, the Seychelles and Comoros.

The news comes as Silicon Valley's biggest companies are aiming to meet growing demand in Africa and Asia for 5G connectivity and broadband, by boosting investment in the regions with the greatest potential for growth. 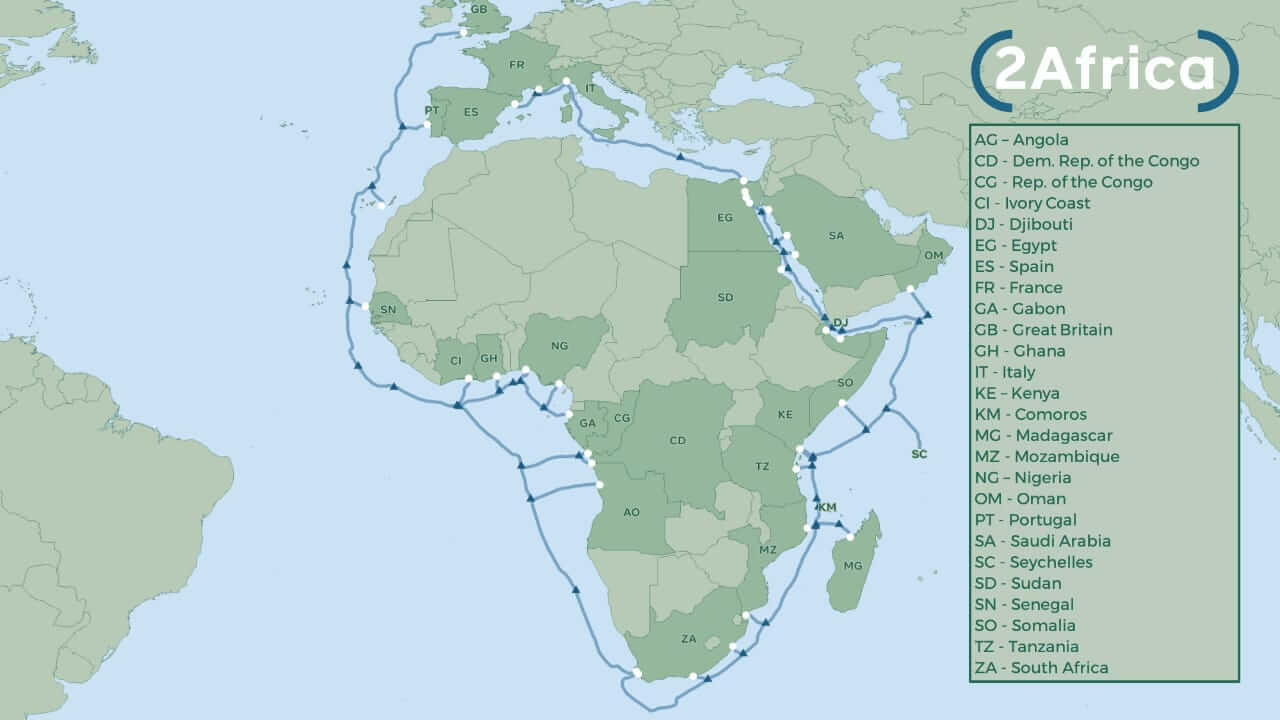 Between them, Facebook and Google owner Alphabet are behind about four-fifths of investments at the moment in transatlantic data connections.

Their joint system is set to link countries as far-flung as Nigeria and Angola with Japan, Singapore, Taiwan, Guam, the Philippines and Indonesia. Together with another recently announced link to the Canary Islands, there will altogether be 35 connection-landings in 26 countries.

A 12,000km cable called Apricot will race around Asia, while two further transpacific subsea cables, dubbed Bifrost and Echo, then will connect Singapore with the US west coast. Echo and Bifrost are expected to increase transpacific capacity by some 70%.

Facebook, Alphabet and their other partners, including Vodafone, Orange, MTN Group and Telecom Egypt, are aiming to have the entire 37,000-kilometer cable system in place by 2024. Its scale is bigger than the combined capacity of all current sea cables in Africa. The cable, of which Alcatel Submarine Networks has started constructing the first segments and repeater units, is designed to have an initial capacity of over 190 terabits per second.

Altogether there are about 400 subsea cables globally, which are responsible for nearly all the voice and Internet connections between countries.

Facebook, which is relying on fast-growing countries like Indonesia for its future growth as it plateaus in mature western markets, first announced its plans for a new undersea cable in May 2020. It has since gained new partners, scale and connectors. It's a successor to the 1990s craze in laying fiber-optic cables under the sea, on which telephone operators spent over $20 billion amid the dot-com boom.

Drawing on that earlier engineering knowledge, the 2Africa cable system will be buried 50% deeper than older systems and routed around known areas of subsea disturbance. It also will use Wavelength Selective Switching for the first time in Africa, an optical switching technology its designers say will give it more flexibility in managing capacity.

The cable system also constitutes a US soft power play, linking these countries together and to America, not China. An earlier draft, called the Pacific Light Cable, also involved Facebook and Google and would have included Hong Kong as well. Washington, however, put its foot down over the Hong Kong leg, arguing it exposed the entire system's data to misuse by China.

China Mobile was to have played a role in the latest transpacific cable, but agreed to exit the project. Africa, meanwhile, has seen its international bandwidth capacity growing at a compound annual rate of 47% from 2016 to 2020. Asia is just behind it at 40%.

And Google, Facebook, Microsoft and Amazon between them have accounted for 64% of all used capacity, in data from 2019.