As AI emerges as a leading tool for both security and network attacks, Google is setting artificial intelligences to fight each other to toughen them up.

"Most existing machine learning classifiers are highly vulnerable to adversarial examples," the abstract explains. "An adversarial example is a sample of input data which has been modified very slightly in a way that is intended to cause a machine learning classifier to misclassify it. In many cases, these modifications can be so subtle that a human observer does not even notice the modification at all, yet the classifier still makes a mistake." 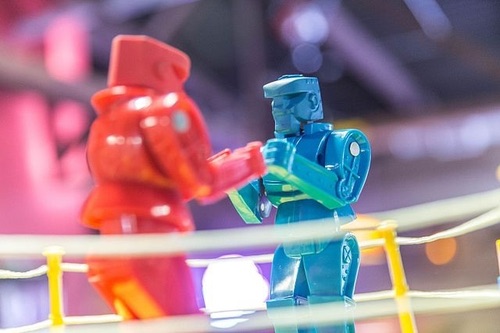 Photo by Lorie Shaull - Own work, CC BY-SA 4.0, Link
Keep up with the latest enterprise cloud news and insights. Sign up for the weekly Enterprise Cloud News newsletter.

The competition will proceed along three tracks, two of them to find the best attack system that can trick a machine learning classifier, and a third for the best classifier to defend against attack.

Tricking machine learning systems is nothing new. Spammers evade spam filters by figuring out what patterns the filter's algorithms has been trained to identify. But more recently researchers have shown "that even the smartest algorithms can sometimes be misled in surprising ways. For example, deep-learning algorithms with near-human skill at recognizing objects in images can be fooled by seemingly abstract or random images that exploit the low-level patterns these algorithms look for," according to Technology Review.

"Adversarial machine learning is more difficult to study than conventional machine learning -- it's hard to tell if your attack is strong or if your defense is actually weak," Google Brain researcher Ian Goodfellow tells Technology Review.

The implications of the contest go beyond image recognition.

"In theory, criminals might also bamboozle voice- and face-recognition systems, or even put up posters to fool the vision systems in self-driving cars, causing them to crash," Technology Review says.

Google announced in March that it plans to acquire Kaggle.

kq4ym 8/7/2017 | 10:54:50 AM
Re: AI One might wonder how much our leaders are followng game theory knowingly or not, and could AI be set up to recognize plots to utilize game theory to mask intrusions when found or at least to prepare for a possible attack.
Reply | Post Message | MESSAGES LIST | START A BOARD

Ariella 8/2/2017 | 12:03:29 PM
Re: AI @Mhhf1ve In Musk's proposed scenario, it doesn't seem to be that AI is developing its own motive but following its programming's directive with an extreme acceptance of any means to achieve the end desired.  But others have suggested that AI would develop its own indepedent will.
Reply | Post Message | MESSAGES LIST | START A BOARD

mhhfive 8/2/2017 | 11:47:07 AM
Re: AI The AI threat to humanity could have no human-like intentions at all.. There's the "paperclip maximizer" story where an AI ends human existence simply as a by-product of being programmed to obtain as many paperclips as possible. We may not understand or know why AI is trying to kill us!

Ariella 8/2/2017 | 8:58:28 AM
Re: AI @mhhf1ve I listened to the entire interview, and he definitely said that the war would be started because of an AI goal to maximize revenue -- rather than the other way around. AI could also then feed into systems to help spark the war.
Reply | Post Message | MESSAGES LIST | START A BOARD

Starting a war to manipulate the markets? Hmm. I'd think it'd be the market crash that would cause a war, not the other way around.. but then again.. there was about 9 minutes there between tweets when our president had top US generals worried for a bit.
Reply | Post Message | MESSAGES LIST | START A BOARD

Ariella 7/26/2017 | 5:46:50 PM
Re: AI Musk takes it a step further in outlining a situation in which market manipulation is achieved by starting a war. It really made me feel like I've seen that movie, though I'm not sure which. Maybe it was just a TV episode.

I'm really more concerned about the job displacement that would result from the automation enabled by AI. See https://www.wsj.com/articles/robots-are-replacing-workers-where-you-shop-1500456602
Reply | Post Message | MESSAGES LIST | START A BOARD

Ariella 7/26/2017 | 5:46:49 PM
Re: AI Musk takes it a step further in outlining a situation in which market manipulation is achieved by starting a war. It really made me feel like I've seen that movie, though I'm not sure which. Maybe it was just a TV episode.

I'm really more concerned about the job displacement that would result from the automation enabled by AI. See https://www.wsj.com/articles/robots-are-replacing-workers-where-you-shop-1500456602
Reply | Post Message | MESSAGES LIST | START A BOARD

mhhfive 7/26/2017 | 5:34:36 PM
Re: AI I think Musk and Zuck are arguing over slightly different things. I think Zuck is looking at the short term -- where his own company operates. And Musk is looking a bit further to the future without thinking about the AI developed within his own companies.

I think I tend to agree with Musk about AI more.. that AI should be pre-emptively regulated before it gets out of hand. Because I could easily see a scenario where AI (unchecked) could be put in control of all kinds of critical infrastructure and financial systems. Perhaps large financial institutions place large bets on the recommendations of AI systems.. without understanding the underlying reasons. That could create a significant market crash that affects the global economy.... And we should probably think about how to avoid that before we're "surprised" by it.

Zuck is a bit dismissive about how widely AI could be implemented, but I think that's the scary part -- that a narrowly trained AI could be put in control of systems that should actualy require more broad intuition and understanding. Human error will put bad AI in charge of something it shouldn't be in control of....
Reply | Post Message | MESSAGES LIST | START A BOARD

Ariella 7/26/2017 | 1:11:27 PM
AI I find it an interesting turn of events to have major figures take public positions about the safety or lack thereof for AI and then have a rebuttal and a "he doesn't know what he's talking about" retort as happened between Musk and Zuckerberg. Do the people here agree more with one than with the other?
Reply | Post Message | MESSAGES LIST | START A BOARD
EDUCATIONAL RESOURCES